Each tornado event we cover is tragic.  Someone has lost a family member or friend.  Towns are devastated.  Some never recover.  There are also stories of heroism, community, and hope.  Today’s event was one I hadn’t heard of before:  The Saragosa, TX F4, May 22, 1987.  As I began to read the devastating stories surrounding this event, my heart was immediately broken.

This tornado traveled only 3 miles and hit the town of Saragosa head on.  85% of this community was destroyed.  There were 30 fatalities, 22 of which were in one location:  Saragosa Hall.

The population of Saragosa in 1987 was 185.  But that night, there were many more in town for a special occasion.  Families had joined together for a graduation ceremony for Head Start four-year-olds.  From an article in NewsWest9.com, no-one knew that a massive multi-vortex tornado was heading right toward them until a parent went outside and saw it.  Many tried to take cover under tables.  Parents shielded their children from flying debris.  The community hall was flattened.  Most of those who died were parents or grandparents of the Head Start four-year-olds.  None of the Head Start children died.  There were several babies, a year old or younger who also died in Saragosa Hall.

Eight more fatalities occurred outside of the community center:  Four were in mobile homes, three were in frame houses and another died trying to outrun the tornado in an automobile.

In the midst of this unbelievable tragedy, the community of Saragosa with the help of volunteers, rebuilt the town by the early 90s.  The population in 2000 was 185.  Each year, the Our Lady of Guadalupe Church holds a mass for the victims.

In a Radio Address to the Nation on Voluntarism and the Supreme Court Nomination of Robert H. Bork on October 3, 1987, President Reagan said the following about the people of Saragosa and the communities that helped them rebuild: “Many believed that spring tornado would make a ghost town of Saragosa, but this past Labor Day, a private sector initiative proved the doomsayers wrong. Over the holiday weekend, 700 volunteers from all over our country, with mostly donated materials, built 15 new homes in a single weekend, and plans are underway for even more. Today the townspeople and volunteers join together to celebrate this fine example of the great American spirit of neighbor helping neighbor. On behalf of all Americans, I join in commending this noble effort.”

The supercell that produced the golfball-sized hail at Balmorhea and the short-lived tornado west of Balmorhea produced a violent, multiple vortex tornado that destroyed the community of Saragosa.  The tornado essentially wiped the community of 183 people off the map, killing 30 and injuring 121 more.  More than 85 percent of the structures in town were totally destroyed.

The tornado began just north of Interstate 10, two miles south-southwest of Saragosa, as a strong single-vortex tornado.  It moved through farmland, destroying a farm house and scattering outbuildings.  As the storm entered Saragosa, it rapidly became a large multiple vortex tornado, just over a half-mile wide.  The path crossed over and enveloped almost all the residential and business district of the town, inflicting F3 and F4 damaged.  The F1 and F2 damage was confined to a very small perimeter of the damage path.  Over 100 telephone and power poles were snapped by the storm, blacking out nearby Balmorhea and crippling telephone service to the county for several days. Autos and trucks were hurled through adobe and wood-frame structures, with some found as much as 500 feet from the point of origin.

Tragically, of the 30 fatalities, 22 were in a single building, Guadalupe Hall, watching a graduation ceremony for Head Start four-year-olds.  Most of those who died were parents or grandparents of the Head Start children;  none of the Head Start children died.  Several others were infants a year old or younger.  Many of the four-year-olds survived because parents shielded them from debris with their bodies, costing the adult his or her life.  Four other fatalities occurred in mobile homes, while only 3 were in frame houses.  Another died trying o outrun the tornado in an automobile.

Shortly after the twister ripped through the community, it lifted.

Note:  Storm Data denotes the building as “Guadalupe Hall”.  In my research, I saw it more commonly known as Saragosa Hall or Saragosa Community Hall.  It was inside Our Lady of Guadalupe Church.

Images via the May 1987 Storm Data Publication 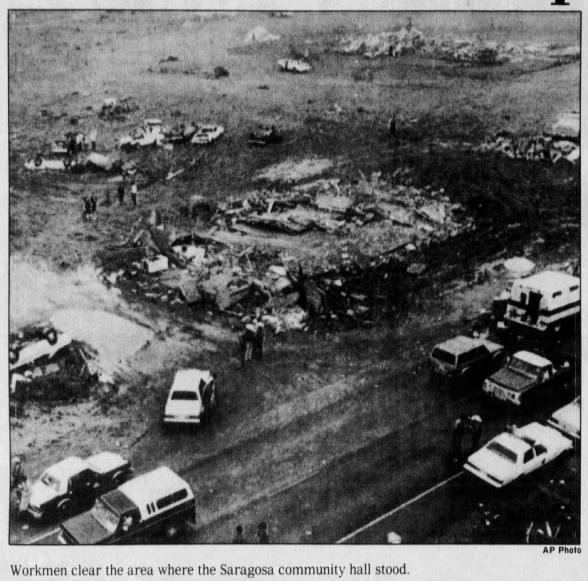 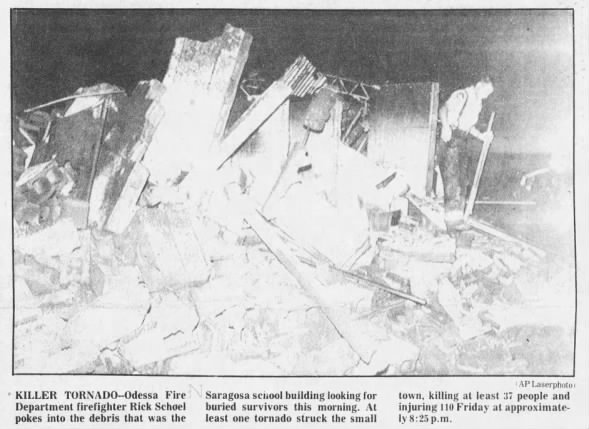 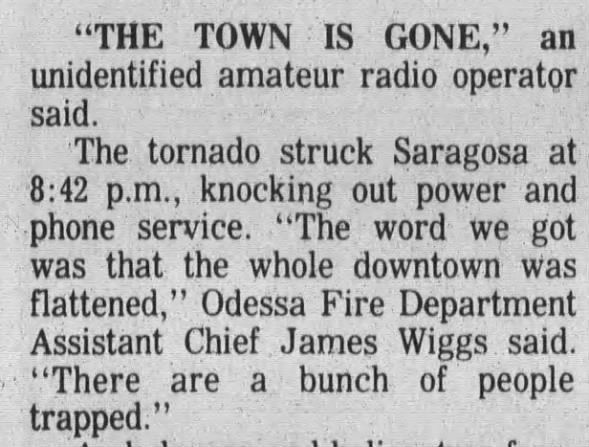 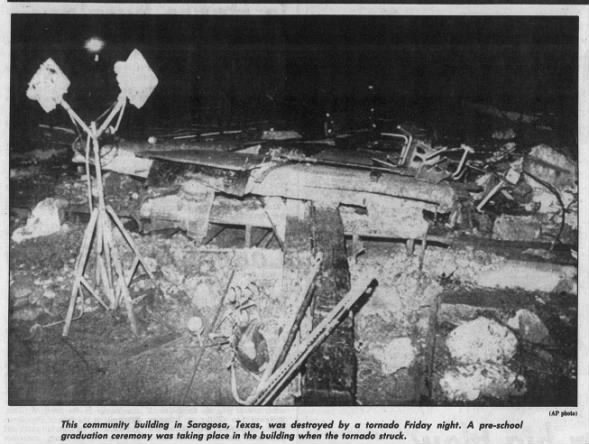 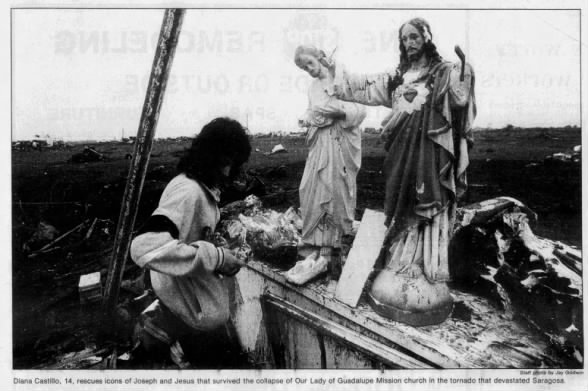 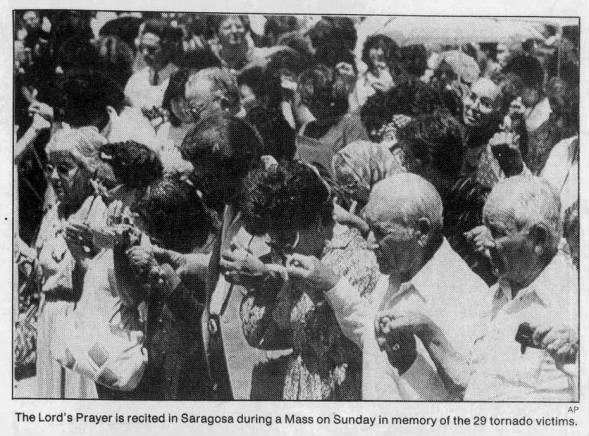 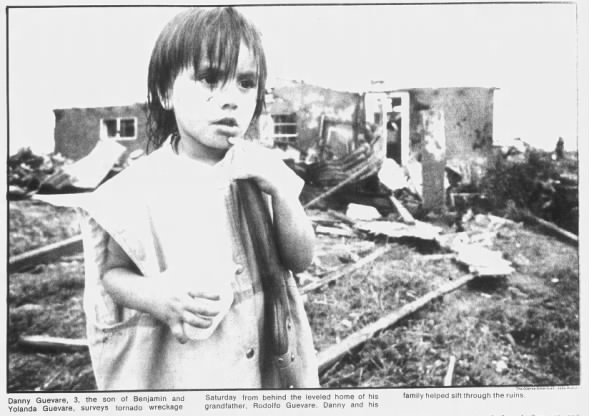 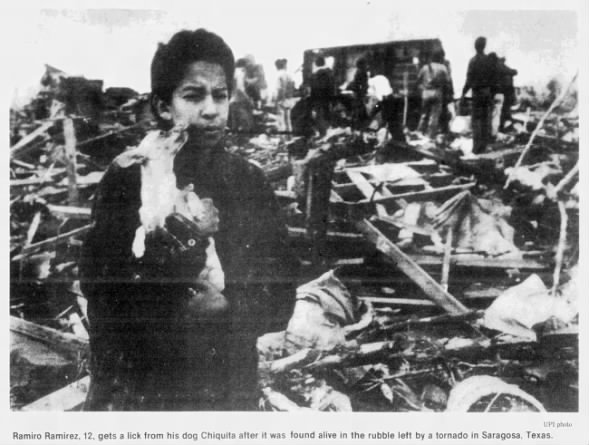 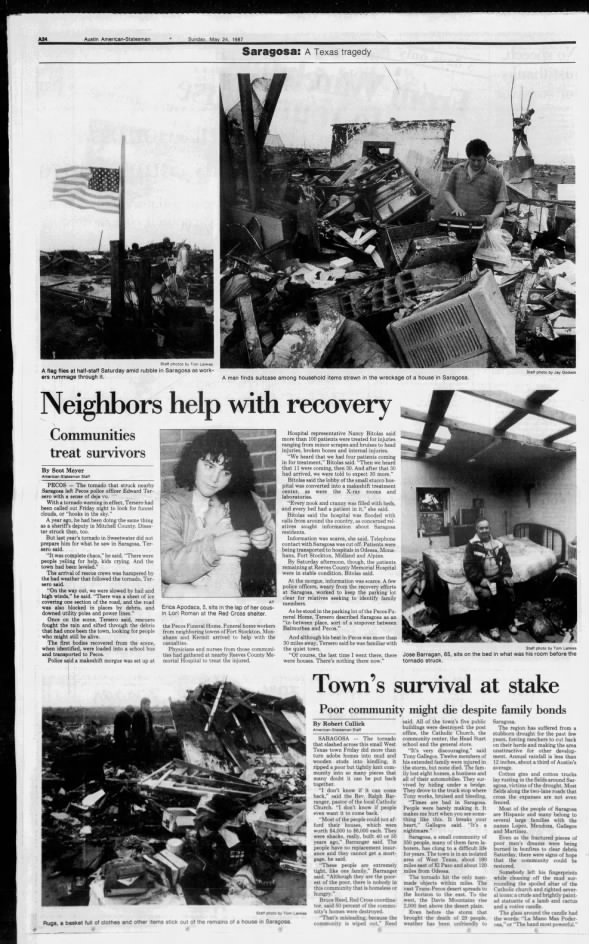 “Town preparing for ceremony for 30 victims of 1987 deadly tornado” – NewsWest9.com