A total of 11 tornadoes were confirmed on October 17, 2012. All but two were in the state of Mississippi. The strongest of the day was given a rating of EF3 with maximum sustained winds of 140mph. It moved through parts of Scott and Newton Counties in Mississippi.

The tornado began east of Hillsboro. It tracked to the southeast downing trees at Harrison Road and MS Highway 21. Some of the trees landed on outbuildings causing damage. A few homes sustained roof damage. The tornado turned more easterly along Greer Road. As it pressed along Russell Community Road, many trees landed on structures and there was a tree that fell through a home and injured someone there. The path continued east and onto George Road where more trees were brought down and there was minor damage to a house.

The NWS survey noted that as the tornado reached the Lewis Road area, “there was a notable increase in the number of hardwood trees that were snapped along the path.”  Near the northern end of the track, a small barn lost part of its roof. The survey states that the tornado reached peak intensity with winds of 140 mph in the Salem Road area. “At this location, three large steel transmission towers were bent toward the ground between Salem Road and Jim Owens Road.” A large shed and a travel trailer were demolished on Jim Owens Road. A mobile home was blown into the roadway at Conehatta Road. “The roof and walls were separated from the undercarriage and the contents of the home were scattered in the area.  There were two occupants in the home at the time, and both escaped without significant injury.” Before leaving Scott County, the tornado damaged the roof of an outbuilding and blew over a small silo.

The tornado crossed Tuscolameta Creek and clipped the south end of Conehatta. Trees were snapped and uprooted in this area. A small shed was destroyed and many homes had roof damage. A mobile home was moved off its foundation and the barn next to it was unroofed. During the last part of its path, the tornado removed the roof off a shed and another home. Tree damage occurred as the tornado moved east parallel to Braddock Road and ended near Beaver Dam Road.

All details about this tornado from the NWS Jackson, MS. 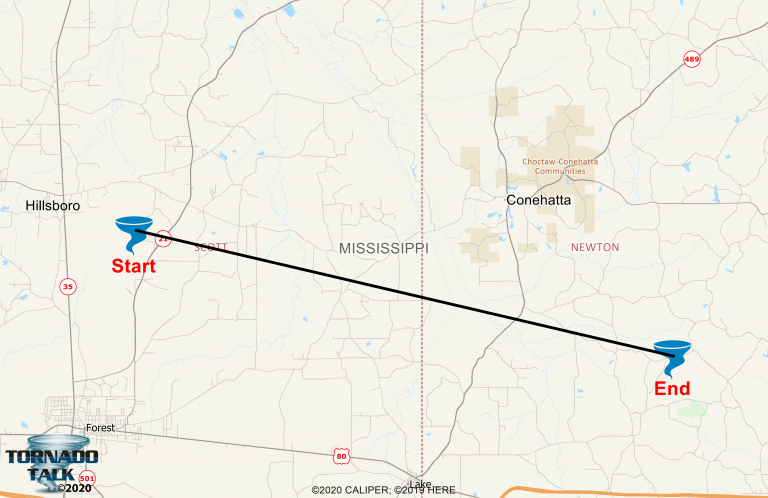 We gathered information for this event from the SPC & NCDC Databases, the October 2012 Storm Data Publication and The NWS Jackson Summary of the Event and found the following differences:

NWS Jackson Summary of the Event