On This Day: September 27

In today’s summary, we delve into the details of an estimated F4 that moved over 20 miles from Craig County in Oklahoma into Southeast KS in 1959. There is some confusion on how the tornado tracked and we explore that. F4 damage was found on 3 out of 5 farms SE of Oswego, KS. Read the full summary here! September 27, 1923: A home was leveled by an estimated F4 tornado five miles north of Seneca, NE. A couple was killed and their children injured. “The roar was reportedly heard for 10 miles.” 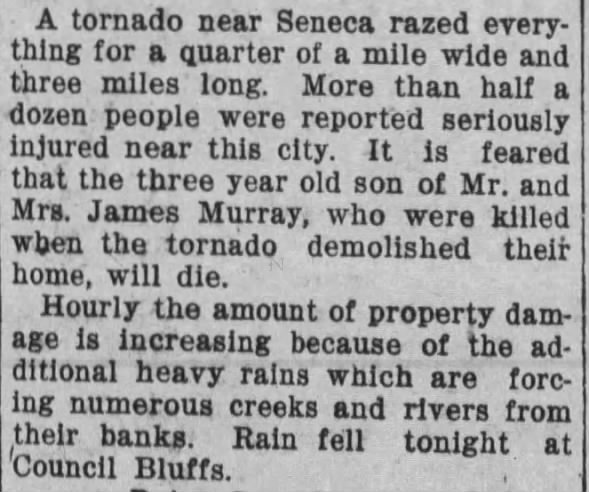 On September 27, 2004, the remnants of Hurricane Jeanne spawned an F2 tornado near Ridgeway, SC. It tracked for 2 miles and destroyed five trailers and two frame homes. One person was killed, and 13 others were injured. Source.

On September 27, 1985, Hurricane Gloria made landfall as a Category 2 hurricane in the Outer Banks of North Carolina, then raced northeast and made a second landfall later in the day at Long Island New York. Extensive damage from wind, storm surge, and flooding affected much of the Mid-Atlantic and Northeast. Source.

On this day in 1290, an earthquake in the Gulf of Chihli (Bohai Sea) near China, reportedly killed 100,000 people. Check out more historical events at onthisday.com!

On this day in 1982, Lil Wayne, byname of Dwayne Michael Carter, Jr., American rapper who became one of the top-selling artists in hip-hop in the early 21st century, was born in New Orleans, LA. Source:  Britannica.

On this day in 1954, “The Tonight Show” 1st premiered on NBC hosted by Steve Allen! Get more daily history at onthisday.com!

On this day in 2008, Pink Floyd’s manager Bryan Morrison died after spending over two years in a coma. Morrison suffered severe brain injuries in a polo accident at the Royal Berkshire Polo Club, England in 2006, and never recovered. He also managed The Pretty Things and was a music publisher for Syd Barrett, The Bee Gees, Elton John, The Jam T-Rex and Wham! Get into the groove with more music trivia at thisdayinmusic.com!