"Through the years West Virginians have believed that, because of its hills and valleys, their state was immune from tornadoes, cyclones and the like. People were accustomed to treat the ordinary rainstorms as a kind of inconvenience or as a godsend, according to their needs at the moment. That, however, was before June 23, 1944."

On June 23, 1944, a devastating outbreak of at least seven tornadoes ravaged portions of the Appalachian Mountains, from Ohio, through Southwestern Pennsylvania, across West Virginia, and into Maryland.  This was a historical outbreak, and we wrote a summary detailing it here.  We felt that the Shinnston tornado deserved its own dedicated summary.

Shinnston was notable for several reasons:
– Deadliest Tornado in WV history
– 15th deadliest tornado in US history.
– Only the second F4 tornado in West Virginia History.  The only other one occurred during this outbreak and is discussed in our other summary.

The stats and overview below are from Significant Tornadoes, 1680-1991 by Thomas Grazulis, since the SPC database only goes back to 1950.  The path is based on the descriptions of start and end locations via Grazulis.

*Grazulis lists it at 300 yds wide, but the summary states that it was a mile-wide.

Per Significant Tornadoes:  “Moved Southeast, creating “indescribable havoc” from northwest of Wyatt to the slopes of Cheat Mountain, north of Alpena.  The funnel was apparently in continuous contact with the ground, and it may have begun as far northwest as Pine Grove, Wetzel county, where one man was killed.  The path maintained a mostly straight line despite irregular and rugged topography.  In Marion County, three people died as homes were destroyed in the southwest corner of the county at “Joetown”.

In Harrison County, many small communities were devastated as the mile-wide funnel killed 72 people in a 10-mile stretch, about 30 of them in the Pleasant Hill section of Shinnston.  Many died in the Peora and Wyatt farm communities just southeast of Shinnston.  Nine people died in Taylor County, mostly at Simpson, and including seven in one family.  Nine died in and near Meadowville, Nestorville, and north of Philippi, Barbour County. Seven more died in Randolph County, near Montrose.  About 340 homes were damaged or destroyed. $5,500,000.”

Note:  Peora and Wyatt are NW of Shinnston.

The Weather Bureau reported at Shinnston and Flemington, that the tornado “removed all vegetation and exposed the mineral soil for a distance of several hundred feet.”  Eyewitnesses reported that as the funnel passed over the West Fork River, the water was drawn up into it, exposing the bottom of the river.  There were reports of multiple funnels along the path of the tornado.  On Route 119, north of Phillipi, a man saw 10 of his sheep picked up by the tornado and they were “moved horizontally through the air”, landing four hundred feet away, unharmed.

The aerial flyover by the Weather Bureau indicated that there were possible satellite tornadoes that were spawned by the Shinnston twister.  “In some places it had the appearance as if a small tornado had been formed out from the main path, pulled up a few trees and then broke up, as the main path remained distinct.”

Grazulis rates this tornado as an F4, but it is possible that this may have briefly reached low-end F5 intensity.  The descriptions of severe ground scouring, debarked trees, cars being thrown and mangled, in addition to the homes being leveled and swept away in the Shinnston area, are things that other high end F4 to low-end F5 tornadoes have done. 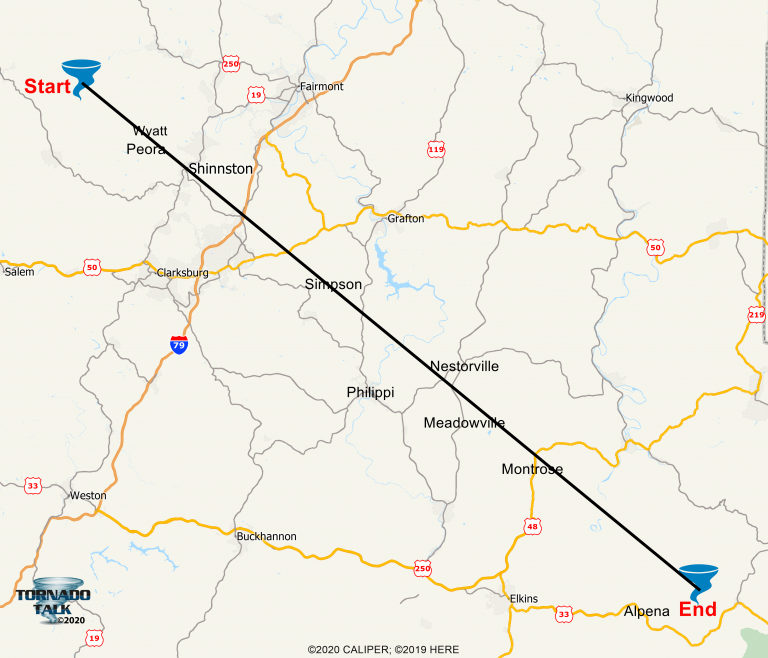 A wonderful book that any tornado historian should have on their bookshelves is “Shinnston Tornado.  Illustrated Eyewitness Accounts of Nature on the War-Path” by John L. Finlayson.  He interviewed folks in Shinnston and asked them about what they had witnessed on June 23, 1944 and how their lives and community had changed.  Originally written in 1946,  this book has been reproduced by the Harrison County West Virginia Historical Society.

Finlayson lived 5 miles north of  Shinnston when the tornado struck.  He was hosting a party and although he did not receive damage from the tornado, he noted that he was a part of “what was probably the most severe hailstorm ever experienced in this section.”  He had Shinnston residents at his house that night and rode into town after things had calmed.  He has first hand experience of the devastation and has captured even more with the accounts from many residents.

Here are a few stories that stood out.

Corporal Jack witnessed the tornado from in front of the mayor’s office on Pike Street.  He noted an “exceptionally heavy wind” and the sky “already black, seemed to turn blacker and blacker.”  He was directing traffic and looked toward the Pleasant Hill section of town.  He said he “saw that for a thousand or more feet up the sky seemed to be full of flying debris.  I thought I could distinguish a large section of fence paling amount it.”

After witnessing the destruction at Pleasant Hill, Corporal Jack describes what he witnessed while walking through the section during the aftermath.  “As I walked up the rather steep street I could see that terrible devastation had been visited upon the entire section.  Just a few of the houses were left standing, and they were twisted into weird shapes.  The rest were utterly destroyed.  It was difficult to believe that such tremendous damage could be inflicted so quickly and so quickly.”

“From all directions I could hear the frightening screams of the injured; and everywhere I looked I could see half-conscious people staggering about.  I bet one man dazedly walking along his arm fractured, and the jagged end of the bone sticking out through the skin.  Probably the saddest thing I witnessed was the number of men and women with children in their arms—many of them dead or dying.  All of the victims were covered with a dirty grime—a kind of water and dirt mixture.” (Finlayson, 21-22)

Mr. Nuzum was a farmer in 1944.  He lived with his wife and daughter on the Terra Alta Branch of Shinn’s Run.  They were all in their house when the tornado hit.  Mr. Nuzum was thrown into a corner of his living room.  He was covered in debris.  His wife had been in the kitchen but he found her in the yard.  He stated, “I have never discovered just how she got there, whether she was blown out or crawled there.”  She was hurt badly but she was okay to get up and walk.  His daughter was also injured by debris striking her head and face.  The family left their house to try to take refuge in a small coal mine near the home.

After the winds had subsided, the family began to look around to assess the damage.  They sadly found on the other side of their barn, the body of Norma Shanks Cox.  Across the ravine from his house lived Paul Cox and his family.  Mr Nuzum states, “His home had been blown away completely.  The tornado had skidded it for about a thousand feet, then picked it up and crashed it at the opening of the coal mine where we had sought refuge.  Earl Singleton said he saw the Paul Cox house carried 175 feet into the air.  Mrs. Cox and her two children were in it.  The house crashed about fifty feet from my home.”

Paul Cox arrived within minutes after the tornado hit to the area where his home had landed.  It is unclear in the story where he had been when tragedy struck.  Per Mr. Nuzum, “It wasn’t long until Paul Cox found his little son, Butch about ten feet from where his mother lay dead.  Butch was entirely naked, and he was seriously hurt.  Shortly after that we found his other little son, Raymond, covered up with debris.  He, too, was found about ten feet from his mother–dead.  Paul pulled himself together and started with Butch for the hospital.  He made it all right, but Butch died early the next morning.  The mother and her children were buried a couple of days later.  The mother was in one casket , and the two children in the other.” (Finlayson 35-37)

Mrs. Lawlis is noted in the book as “a shining example of the willingness of Shinnston people to go all the way in an effort to help stricken tornado victims.”  Her home survived the tornado’s wrath.  She noticed the overwhelming number of people heading to the clinic, so she opened her home to some of the injured.  “We had a real hospital there in my home for ten days.  The Red Cross folks told me that it really was a big help to them.  I was glad to be able to help, and if it ever happens again–well, I guess I would do it all over again.” (Finlayson, 68-69)

In a section of the book called “Tornado Sidelights”, Finlayson lists some of the more unusual occurrences witnessed after the tornado.  Here is just a sample. (Finlayson 165-170)

We were generously granted permission to display photos of the Shinnston tornado damage by The West Virginia and Regional History Center, West Virginia University Libraries.

Some say we don't get tornadoes in our region. Actually over 160 tornadoes have been documented in the state of WV alone and one of the deadliest natural disasters in state history was the 1944 Shinnston Tornado. (historical photos courtesy WV State Archives) #wvwx #ohwx #vawx pic.twitter.com/RSyxbUMl0I

“Tomorrow June 23rd will be the 74 anniversary of the Shinnston Tornado. The deadliest tornado in West Virginia’s history struck Shinnston and killed sixty-six people there and the surrounding area. This week’s Flashback Friday is a black and white photo of wreckage from the tornado. It is one of our most recent photo donations. To learn more about the tornado and read first-hand accounts of the survivors you can check out “Shinnston Tornado: Eyewitness Accounts of Nature on the War-Path” https://www.amazon.com/Shinnston-Tornado-Illustrated-Eyewitness-Accounts/dp/1500915165“

“This Sunday marks the 75th anniversary of the Shinnston Tornado. For this week’s Flashback Friday we have a black and white photograph of the aftermath of the June 23, 1944 tornado that hit Shinnston, WV. This photograph shows the destroyed homes of Carl Bean and Charles Carlin located on the Prospect Valley side of Peora Hill. This is the left-hand side of the road leading from Peora to Shinnston. Several people were killed at this location.“

“The town of Shinnston was virtually destroyed by the tornado outbreak of June 22-23, 1944 (photo by Ernie Sampson)” via Goldenseal Facebook Page

“On June 23, 1944, a tornado also devastated the town of Montrose in Randolph County. In this photo, servicemen from the U.S. Army, Civil Air Patrol, and West Virginia State Guard survey the damage in Montrose. (photo courtesy of the West Virginia State Archives)” via Goldenseal Facebook Page

“Before the tornado, Henry Heldreth made his home in this streetcar in the Pleasant Hill section of Shinnston. Miraculously, he survived the storm. (photo by Ernie Sampson)” via Goldenseal Facebook Page 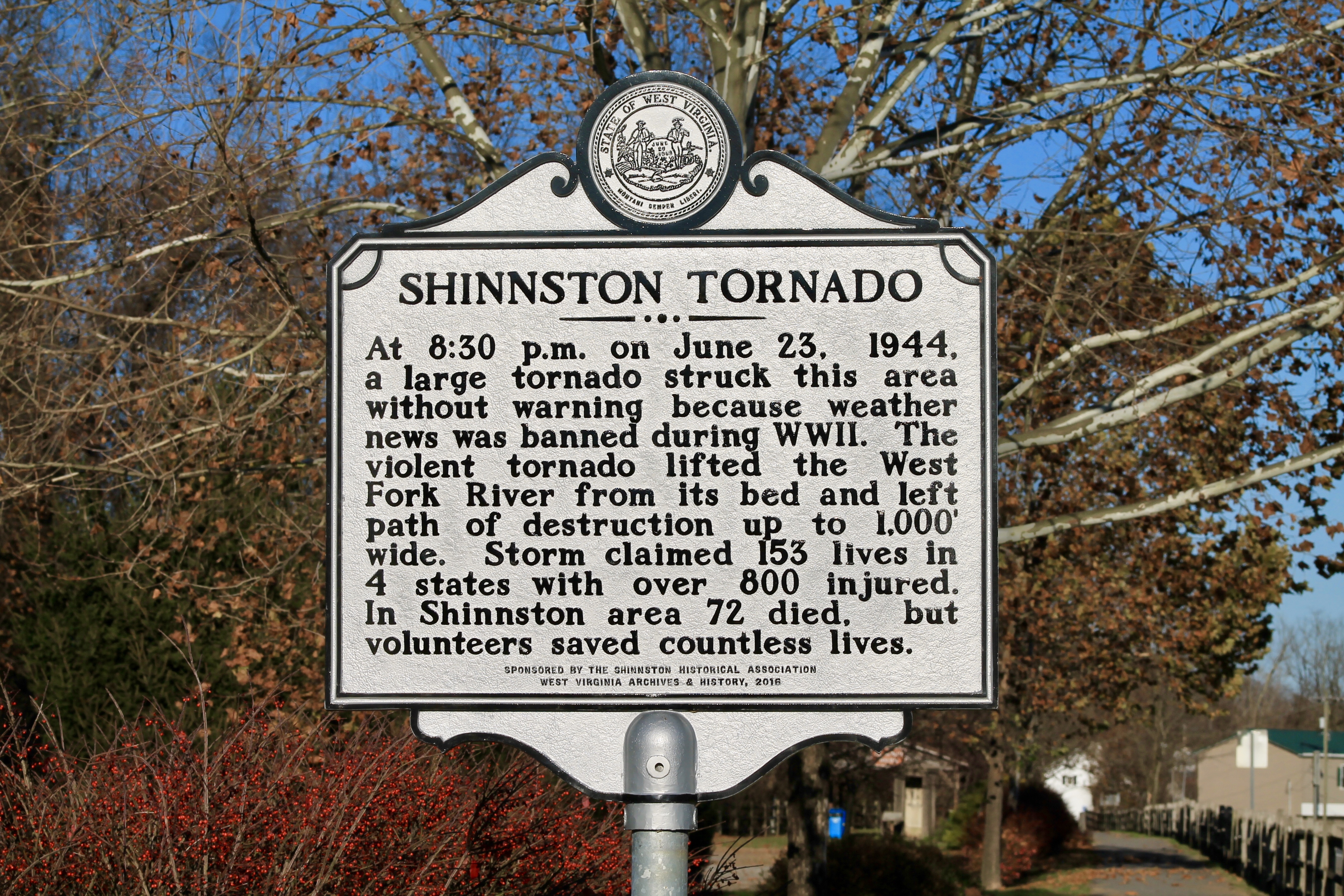