A total of 9 tornadoes were confirmed in Oklahoma on October 21, 2017. All but two tornado were given EF1 ratings.  The other two were given an unknown rating. We look at one of the EF1 tornadoes in this summary.

The path was fairly short at 3.4 miles. It developed just north of State Highway 9 and just west of Santa Fe Avenue. Tree damage was found in this area. The twister moved to the east and damaged a business and destroyed a shed. It then made a turn to the southeast, crossed Highway 9 and passed near the Riverwind Casino and Hotel. Trees were snapped just west of the Riverwind. Per the NWS Summary, “At the casino, two air conditioner units were displaced from their pedestal on the roof of the building, which allowed rain inside the structure. Some roof facade damage was also noted at the casino. Just south at the adjacent hotel, strong winds created some roof facade and siding damage.”  The Beach Boys were holding a concert inside the casino. There were no fatalities and no injuries reported with this event.

The tornado moved across I-35 and damaged businesses.  At least one shed was destroyed between the interstate and the Canadian River.  Per the NWS, the tornado moved into an inaccessible area near the river and crossed into Cleveland County south of Norman.

In Cleveland County, the tornado stayed south of the neighborhoods south of Highway 9.  The only damage observed was to some trees and fences.  The tornado ended at the southern end of South Canadian Trails.

In an article from Fox 25 on October 22, 2017, the renter of one of the destroyed sheds, Mark Zachary, was interviewed. He used that building for a fork lkft, trailers and a small welder. It was completely demolished. Mr. Zachar stated in the article, “We’re just trying to separate anything from the junk, trash, metal and then anything that’s salvageable.” 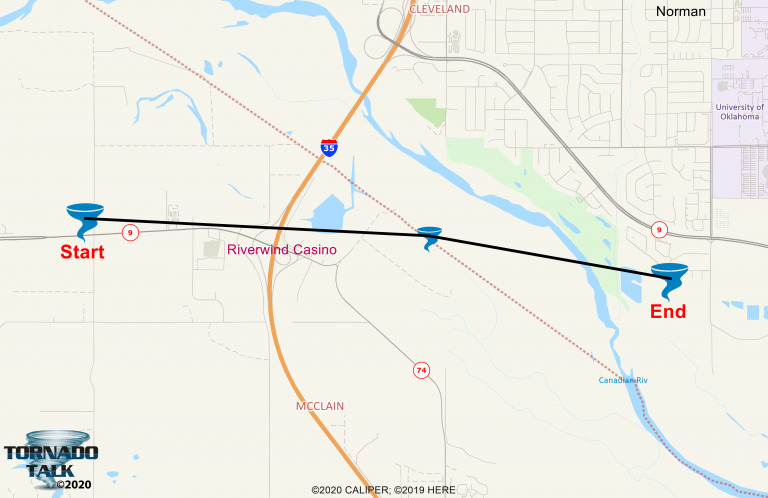 Damage East of I-35 via NWS Norman

My son at OU just sent me a picture of the tornado that came through Norman. #tornado #outornado pic.twitter.com/esBS3VZ3wj

A tornado hit Riverwind Casino on Saturday night while the Beach Boys performed before a sold-out crowd inside https://t.co/szDthb11b7 #okwx pic.twitter.com/841h7knpZk 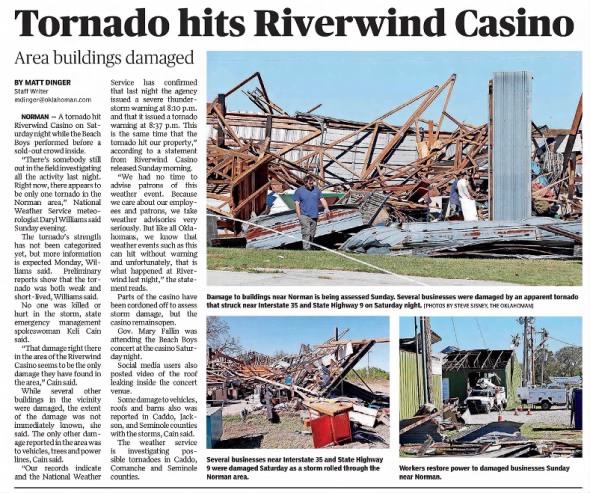