On the afternoon of July 27, 1936, two tornadoes hit Washington and Fayette Counties in Southwestern Pennsylvania. They caused over $1,000,000 in damage. I was made aware of these twisters while reading “Tornadoes of the United States” by Snowden Flora. They were shown under a list of “Especially Damaging Pennsylvania Tornadoes.” These tornadoes were not included in Significant Tornadoes by Thomas Grazulis. However, they produced damage that was likely in the F2 range, and one of these was a killer tornado. The tornadoes were likely embedded within a squall line (QLCS tornadoes) as there was a lot of wind damage in surrounding areas. They began around 5:00 pm ET and moved in tandem along parallel paths about 6 to 7 miles apart.

Coordinates based on descriptions in newspapers:

This tornado formed near Scenery Hill, snapping trees and telephone poles. It also destroyed several silos and outbuildings. Passing through Beallsville, it toppled two huge poplar trees onto the highway. Here, it also tore the roof off a house and dropped it 100 yards away. At Richeyville, the brick walls of a theatre under construction were blown away. The storehouse at the Rosefield Beach Gas Station was turned upside down. The clubhouse had roof damage at the Nemacolin Country Club, and trees were torn down.

A farmer in Centerville saw a “big black cone.” He said, “you could see corn stalks, pieces of wood, whole branches of trees flying in the air like confetti.” At the historic Taylor M. E. Church in Centerville, the roof was blown off, and windows smashed out. The McCutcheon Monument, a 60-foot tall obelisk located in the cemetery, was destroyed. Its huge blocks were scattered over a considerable distance, and other tombstones were lofted and scattered “like pebbles.” Across the street from the church, a house was unroofed. A garage was blown away, but the car that was inside was unscathed. Corn crops in the area were leveled. Scores of trees were toppled, some of which smashed through roofs and porches. At the Dorsey Brothers Orchard, three miles west of Brownsville on Route 40, over 100 trees were leveled. Several homes through this path were collapsed or destroyed.

Near Grindstone, at the Newcomer Farm, the large dairy barn was leveled, killing three horses and two cows. The south side of the farmhouse was “blown away.” The Methodist-Protestant Church at Rowe’s-Run, a brick structure, was thrown off its foundation and down a hillside. Several other houses in the Grindstone and Rowes’ Run area sustained varying degrees of damage.

At Smock, an 8-year-old boy and a 23-year-old man were killed and one other person injured when a grandstand was blown apart. A nearby warehouse was destroyed. The Union Supply Store was unroofed. Part of the roof was carried 100 feet and landed on the Colonial 3 Hotel. From Smock, the twister continued producing minor damage for about three more miles before it lifted. In addition to the two fatalities, at least 17 people were injured, nine severely enough to be hospitalized. 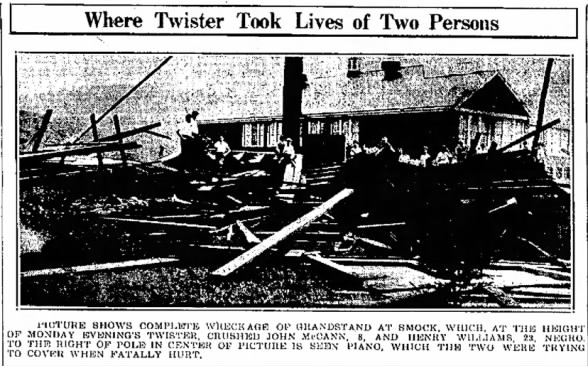 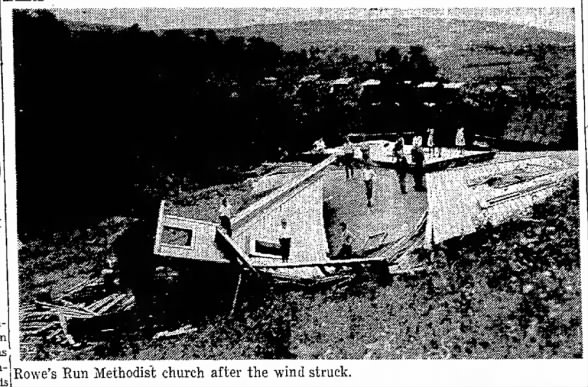 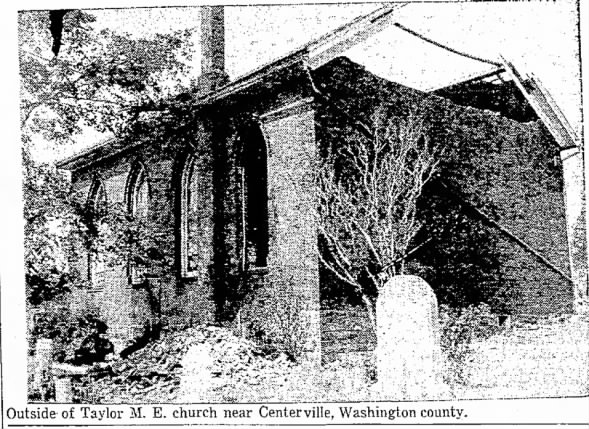 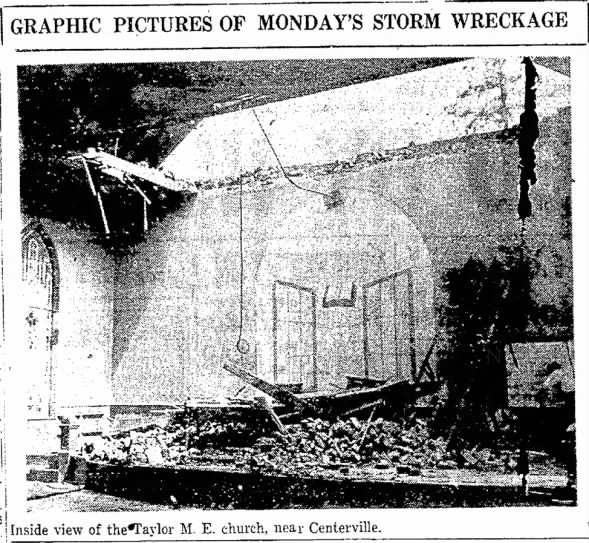 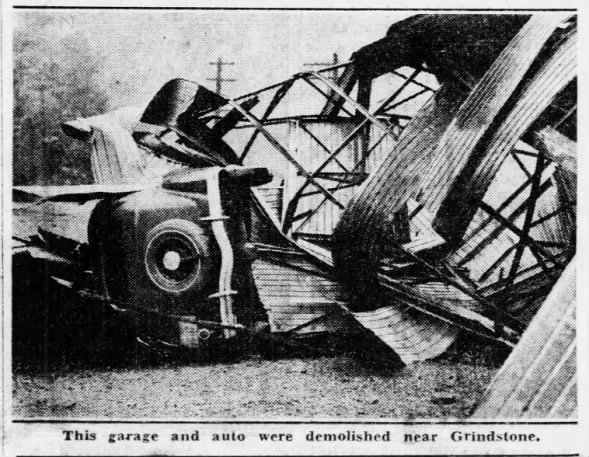 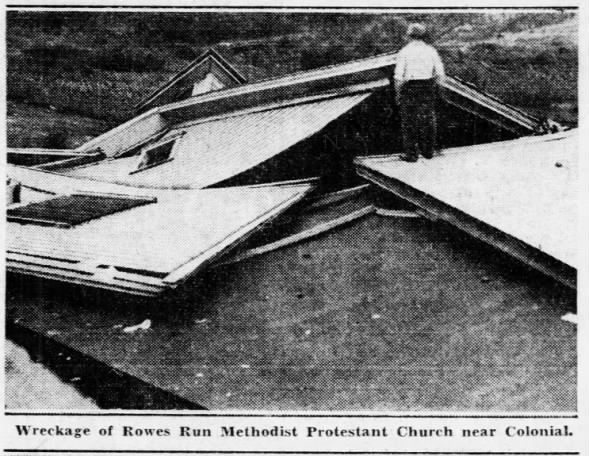 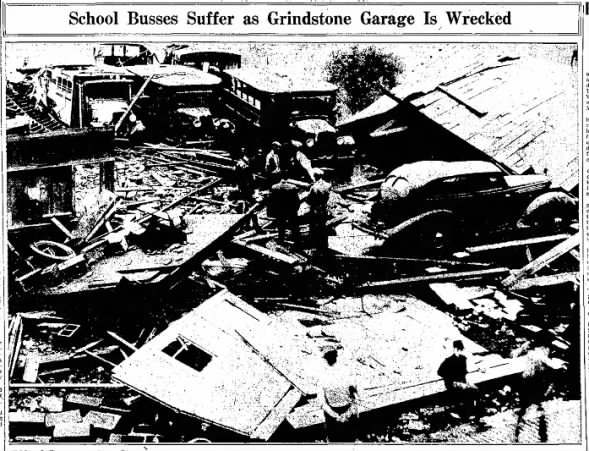 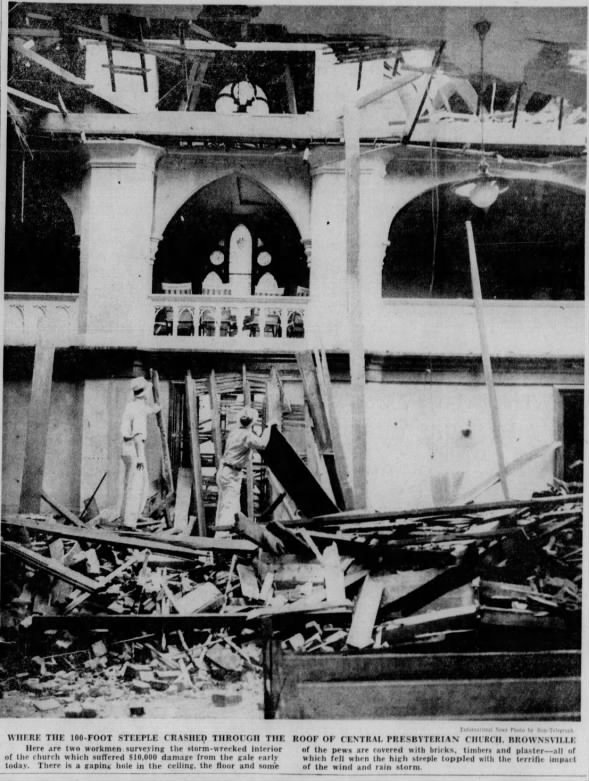 This tornado began in Charleroi and then swept through Perryopolis and Connellsville. At Charleroi, trees and power poles were uprooted. Some homes had soffit damage. This damage in the Charleroi area would classify as F0 to F1. As the tornado crossed the Monongahela River, it clipped the corner of Westmoreland County. It skirted past Belle Vernon, where there was minor damage, mostly from falling trees/branches.

At least a dozen homes were damaged at Perryopolis. A sleeping porch was demolished on one home here. Most of the damaged homes were unroofed. Windows were blown out at the Perryopolis School, and the spire was torn off of the Greek Catholic Church. The town’s drug store had its windows shattered. Well drilling machinery at the Perry Township WPA water project was blown over. Several farm buildings were leveled. Hundreds of trees were uprooted and thrown across the streets in this area.

The tornado was close to a mile wide as it swept through Dawson. Extensive damage occurred at the Dawson Driving Park, home of the Fayette County Fair. The large grandstand was leveled with pieces thrown 300 feet away. Two other buildings here were unroofed. The poultry building at the park was moved off its foundation and turned almost entirely around. Three homes in Dawson were unroofed. In Liberty, two homes and the East Liberty Presbyterian church were unroofed. Many roads were blocked from falling trees. In this area, countless chimneys were blown away, and other minor damage occurred to dozens of homes.

Near Amity Drive, witnesses described a cloud on the ground with trees and branches spinning around it. In this area, a house was destroyed, and extensive damage occurred to trees and crops. A firemen’s carnival was blown down at Connellsville. The high-pitched roof of the Church of the Brethren was torn out, and a huge section of it smashed into a house across the street. At the Ford Motor Company on the west side of town, three cars were destroyed, and windows were blown out of the showroom. A few homes were also unroofed in this area. A boy was injured from a live power line that fell on him.

The Rotter-Brookvale area was hit hard too. A home was unroofed, and the chimney fell, injuring a woman. A boy was injured when he was caught outside in the tornado, and a tree fell on him. Numerous windows were blown out of houses, with the flying glass injuring at least three more people. Many trees were downed. A blacksmith shop, corn crib, and chicken coop were leveled at a farm. A concrete block building was also destroyed. Across the highway from the farm, a beer distributor, a 40X100 foot concrete building, was destroyed. An employee saw “white and dark clouds moving in crisscross directions.” Three people took shelter inside and were uninjured.

The tornado crossed the railroad tracks, where it demolished a large, 60X100 foot frame-brick building that housed machinery for the Corrado & Galaridi Construction Company. It then moved through a residential area, downing trees, and damaging homes. It unroofed a school carrying the roof away, and it blew down a large billboard. A large warehouse was shifted off its foundation, and a farm was leveled. Soon after, the tornado lifted. 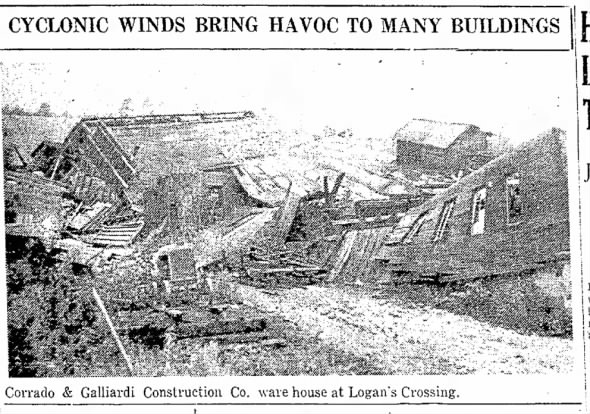 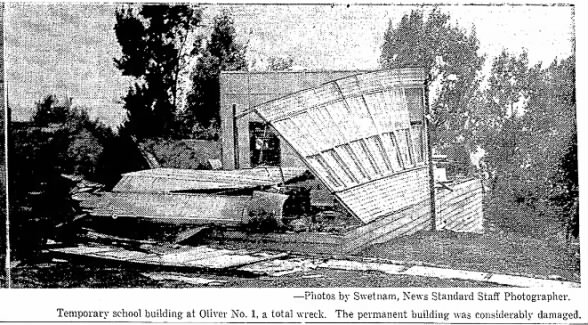 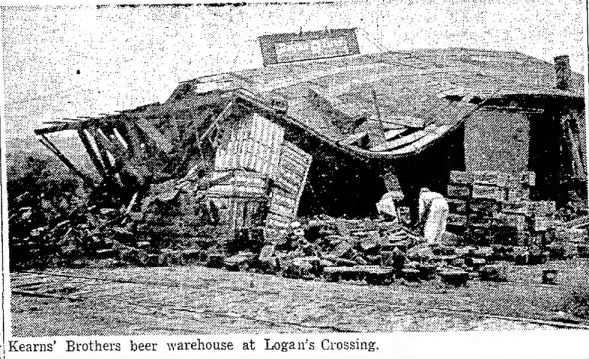 The McCutcheon Monument once towered over Centerville