Per the SPC Database, 20 tornadoes occurred on April 22, 2011.  The strongest, an EF4 hit parts of the St. Louis Metropolitan Area.  It reached maximum intensity as it tracked through the community of Bridgeton, just west of Lambert St. Louis International Airport, in St. Louis County.

Total path length was 21.3 miles through parts of St. Louis County (MO) and Madison County (IL).  The width was 1/2 mile at its max.  There were 5 injuries and no fatalities reported.

The tornado developed along the northern edge of Creve Coeur Lake.  It tracked due east, moving at 40 mph.  It intensified at Maryland Heights.  EF3 damage was produced to many homes and businesses in this area.  It crossed I-270 about 1 mile south of I-70.

Peak intensity was reached at Bridgeton along Old St. Charles Road.  It continued parallel to I-70 through St. Ann and then moved toward the Lambert Airport.  Many of the large windows in the main terminal building were blown out or damaged by flying debris and a large section of roof was peeled from Concourse C.   Most at the airport were evacuated to lower levels and to interior rooms before the tornado hit but there were still 5 people injured by flying debris.  Damage to the airport was estimated at $35 to $40 million.

The tornado left the airport and moved into Berkeley.  I crossed Interstate 170 between Airport Road and Scudder Avenue.  EF2 damage was reported along Fourth Avenue.  Near Ferguson, there was extensive roof damage to the Newger Materials Building and the First Baptist Church.  The tornado partially removed the roof at Griffith Elementary School.

The NWS survey discovered EF2 damage east of Dellwood.  4 large utility poles were snapped and there was significant tree damage.  There was tremendous roof damage in Bellefontaine Neighbors.

The tornado crossed the Mississippi River from the far northern part of the City of St. Louis into Madison County, IL.  It continued to move to the east 1/2 mile north of the intersection of Illinois Route 203 and Pontoon Road.  There were numerous uprooted and snapped trees and 3 homes lost their roof.  Approximate 100 homes were damaged in this area.  Max damage was in a neighborhood along Bern and Dawn Avenues.

The tornado moved to the southeast and ended near the intersection of Alton Street and Pontoon Road.  The Illinois portion of this tornado was given a rating of EF2. 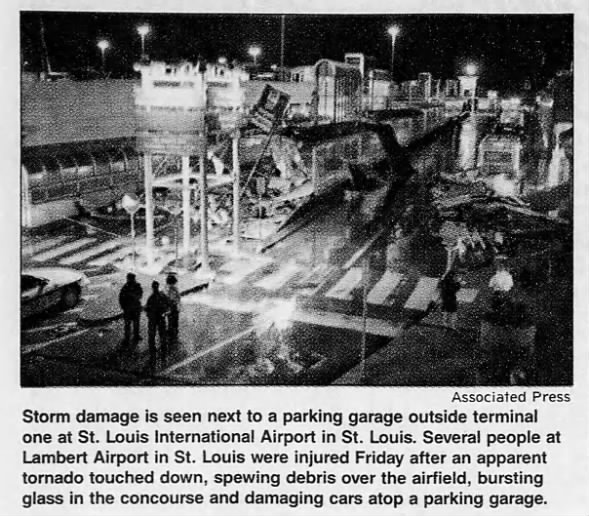 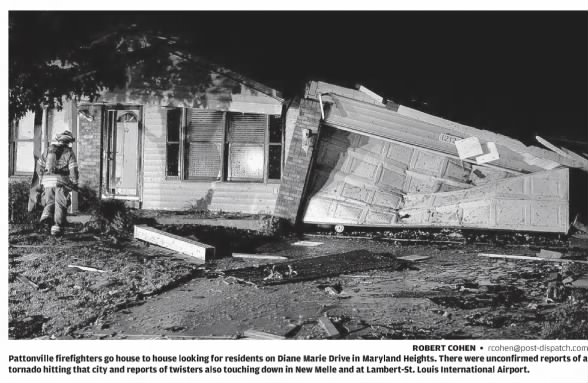 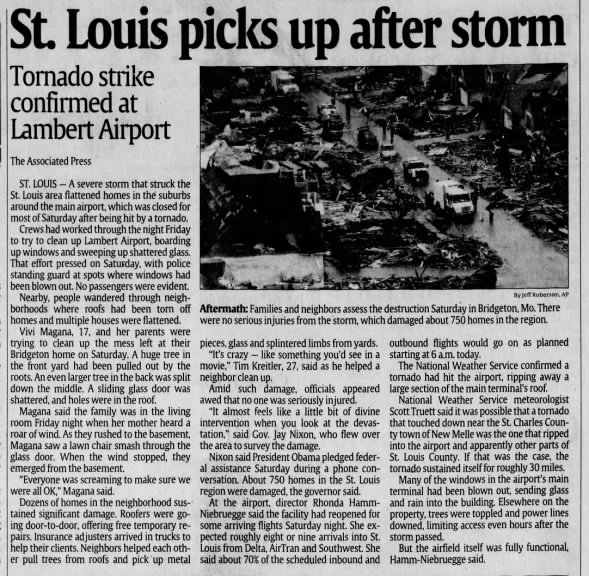