Per The Storm Prediction Center there were three tornadoes on September 3, 1963. This summary looks at the strongest, an F3 that hit Elk County in Central Pennsylvania. This tornado occurred exactly one month after an F3 hit Glassport, PA. There are some discrepancies with this event, which will be discussed below.

The tornado developed along a hillside about a mile north of downtown Ridgway, west of the State Police Barracks. Trees were ripped up along the hillside. It crossed the Clarion River, where water was reportedly sucked up. The tornado crossed Route 219, near the Police Barracks. Here, a car was lifted off the ground, spun around, and dropped about 15 feet off the highway. Damage in Ridgway was mainly to trees and powerlines. Before getting to the Lynchville neighborhood, the tornado slashed through the Henry Foster Farm, as it crossed Johnsonburg Road. A herd of 14 cows were killed when they were picked up and “dashed” into the ground. An aerial photograph of the farm shows damage indicative of low-end F1 strength. Many trees were toppled, and the large barn had some roofing blown off.

The tornado continued moving east and plowed into the Lynchville area. This was also where the tornado reached its peak intensity. The tornado is officially rated at F3, however, Thomas Grazulis in Significant Tornadoes rates the tornado an F2. His F2 rating seems to be correct. Photographs we’ve uncovered show damage fluctuated between F1 and F2. We could not find any photographs that show F3 damage.

In Lynchville, between 100 to 150 buildings were damaged or destroyed. Homes had shingles and siding stripped off, some were unroofed, and others were shifted off their foundations. At the St. Mary’s Cemetery, 20 tombstones were knocked over. On Huston Street, a motorcycle shop was leveled. Along Benzinger Road a small home was collapsed. The tornado passed over a trailer park along Buck Tail Road. Two of the trailers were blown onto their sides, one was flipped off of its foundation and destroyed, and seven others had windows or siding blown off. One trailer from here was supposedly thrown 3/4th of a mile and was thrown into a house. We find this claim to be dubious. There is no corroborating evidence of this. The contextual evidence does not support this claim. Other trailers along the path of the storm were thrown up to 100 feet and destroyed. At least 20 trailers were reported to have been destroyed. Five empty railroad cars were also toppled.

The tornado dissipated about 4 miles east-northeast of downtown St. Marys. A total of 20 people were injured, though only one seriously enough to be hospitalized. The tornado left a mark on the community, as this event is still widely talked about in the “If you grew up in St. Marys, Pa., you remember…” Facebook Group. This is only one of two tornadoes since records began in 1950 that affected the town. The other one occurred on July 26, 2009, which was rated EF-1. 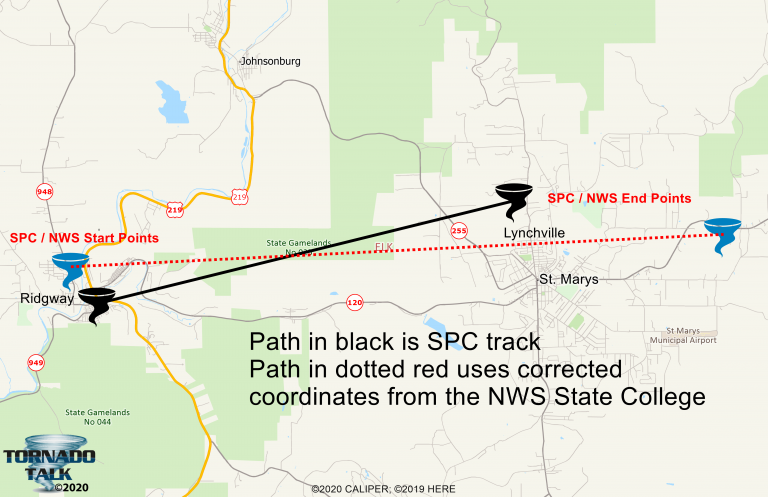 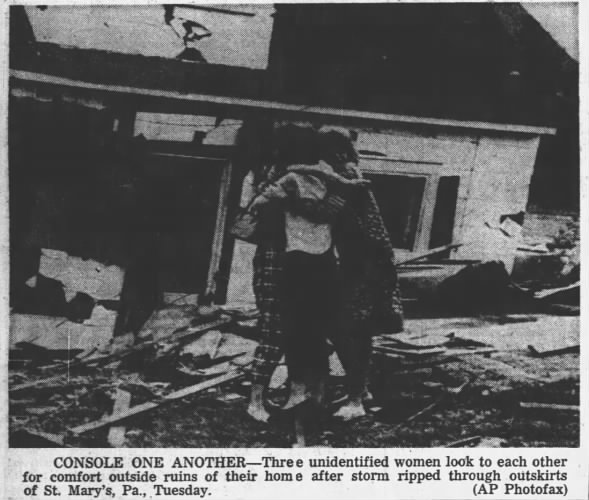 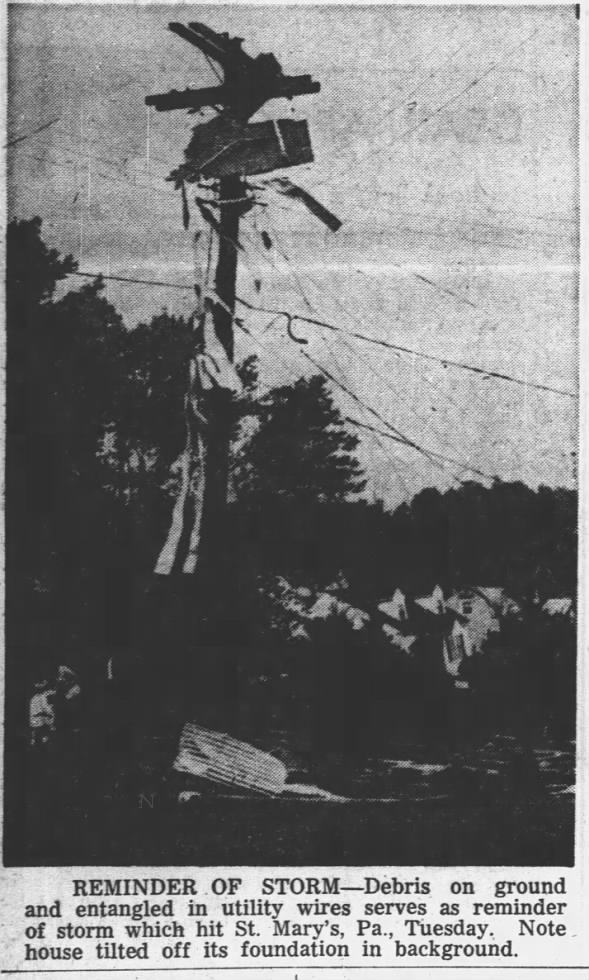 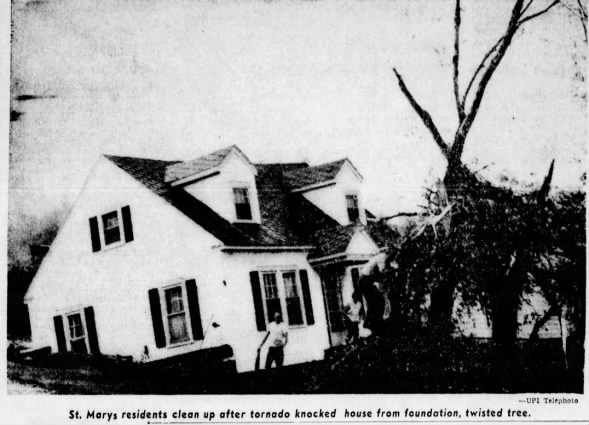 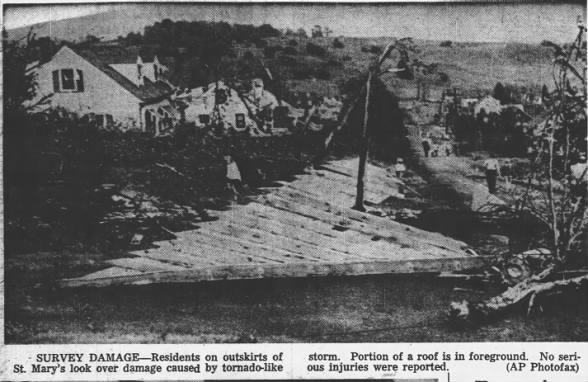 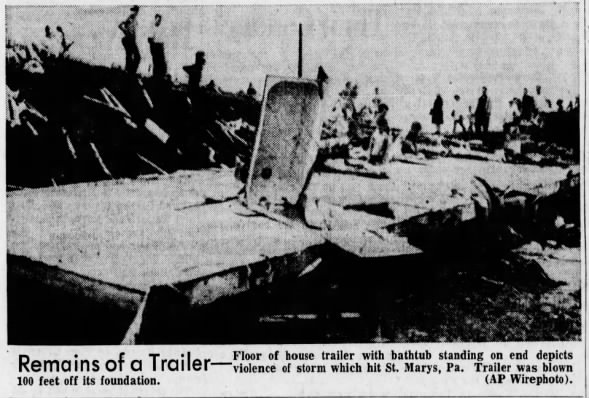 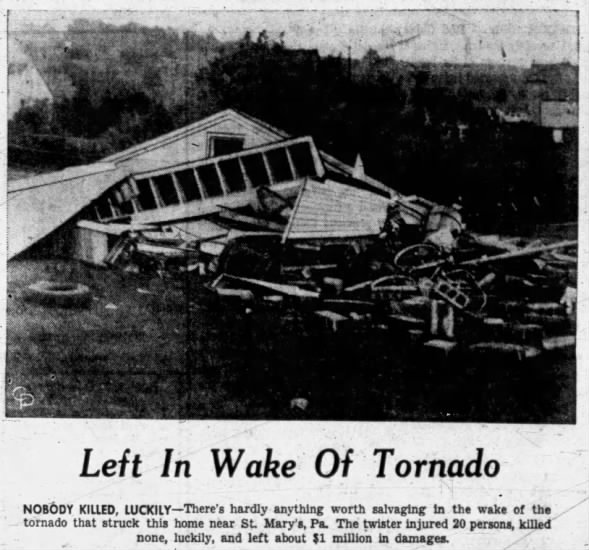 We gathered the information for this event from the SPC & NCDC Databases, the NWS State College Tornado Database, the September 1963 Storm Data Publication and Thomas Grazulis in Significant Tornadoes and found the following differences: