Note: The SPC database lists this singular tornado as two tracks. As this is purely an unintended error and supposed to be one tornado, the statics of the two are combined.

On September 17, 2004, the largest tornado outbreak in Virginia history swept across the state. Per the SPC, 38 tornadoes formed across Virginia. This outbreak was spawned by the remnants of Hurricane Ivan, a former Category 5 storm that decimated portions of the Caribbean and Gulf Coast. Ivan holds the world record for most tornadoes from a single tropical cyclone – 120. Officially, the most powerful of the Virginia portion of the event was an F3 that struck Remington, VA. However, this summary shows Stanardsville was likely even stronger. In fact, as difficult as it was to find information on this tornado, it could be one of the more powerful ever documented in the region. While surveyed and rated as a single tornado track by the National Weather Service (NWS), the track was divided into two separate tornadoes along the Madison/Greene County border in the SPC Database. This is why there are two SPC stats listed, but only one tornado.

The tornado began 1.7 miles to the southeast of Stanardsville at a landfill, where the roof was ripped off of a building. Initially narrow, it crossed Highway 33 tearing part of a roof off of a home. Trees were sporadically snapped and uprooted for this first mile of the track before the twister became an entirely different animal. Within a half-mile of distance over a large section of trees, the width of the lighter damage more than quadrupled to 520 yards (3/10ths of a mile) wide. The intensity of the tree damage increased dramatically, with entire sections uniformly flattened in distinct cycloidal patterns.

After another mile, the tornado crossed Robin Lane with a width of roughly 700 yards (4/10ths of a mile). A mobile home was splintered into unrecognizable debris and a two-story home was pushed entirely off of its foundation. The most severe damage here was to a walkout basement single-story house. That house belonged to Winston Morris. Mr. Morris had only just crouched in a basement corner when he felt the house beginning to shudder. Per the Greene County Record, he described the sound of the tornado as “a loud roaring noise with popping and snapping sounds. It was like the world was twisting. I was scared.” Despite being in the basement, Mr. Morris’ glasses were blown from his head and never found. It is fortunate for Mr. Morris that he had a basement, received enough forewarning to act, and took that warning seriously. All portions except for parts of two rooms along the far back left corner were swept away and smashed into a pile of rubble. Appliances were also removed from the floor. In one section only a brick chimney was left standing, which itself had been sheared off. The intensity of this damage is such that I can only assume that this house was never surveyed, for this should easily qualify as F3 damage. F3 damage is defined by the SPC as when “Roofs and some walls torn off well-constructed houses… most trees in forest uprooted.” Considering the vast majority of the walls on this home are gone including many appliances, it would seem that regardless of construction this would fit that definition. After all, only a home with some level of attachment could sustain such complete wall failure and not be slid from the foundation. 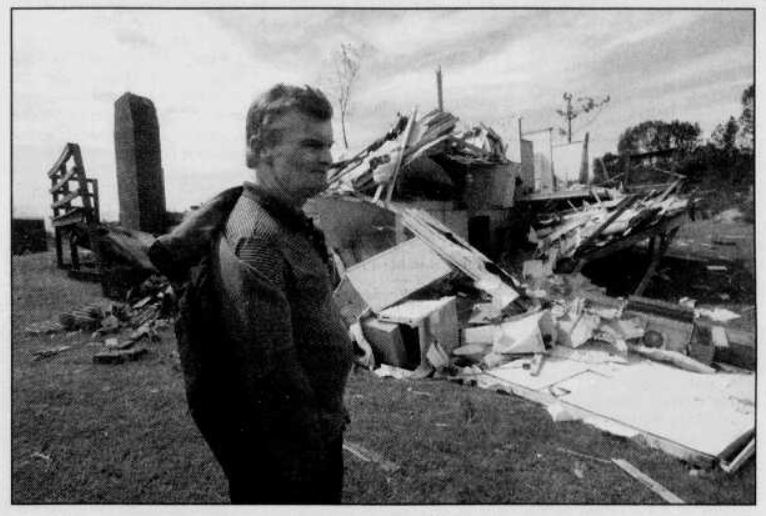 Mr. Morris and his home. Image from the September 14, 2004 Bluefield Daily Telegraph via newspaperarchive.com

Several more homes were damaged or destroyed as the tornado crossed Dundee road, where a man in his car was injured after a tree fell on his vehicle. On the other side of the road was the Greene Hills Club golf course. The very small corridor of the most intense winds narrowly missed the main buildings of the course. The clubhouse had one wall, most of the tin roof, and the chimney removed. Nearby, the 19th Hole Restaurant had much of the brick facade stripped. The door was blasted into the building along with large tree branches. Along a path leading to the main building, a few hardwood and softwood trees were partially debarked with only the stubs of the largest branches remaining. Some of the oak trees destroyed at the course were believed to be over 300 years old.

The tornado continued to the north-northwest and hit the cinderblock exhibition building at the Greene County Fair Grounds, which was destroyed. A tractor-trailer full of cattle grates was overturned. Crossing Madison Road a cornfield was flattened, with some leaves appearing to have been stripped from the stalks.

There may have been some slight weakening as the circulation curved more to the north and moved into Madison County, though no houses would be directly hit. Treefall became somewhat more spotty and disorganized, at least one aluminum garage was destroyed, and a rock chimney was topped off.

The dip in intensity was short-lived, and it began to ascend the outer ridges of the Blue Ridge Mountains and the Rapidan Wildlife Management Area. Less than half a mile after beginning to weaken, the intensity began to dramatically increase. Trees were snapped and uprooted in vivid circular patterns, with some areas of the forest completely flattened through the valleys and sharp hills. In about a mile, the rising and falling hills took the center of the tornado from an elevation of roughly 800 feet to a ridgeline of 1,361 feet. Even more incredible was the elevation gradient along the width of the tornado. At one point along the southeastern slope of Kirtley Mountain, the altitude of the left edge of the tornado was about 800 feet higher than the right side.

The tornado exceeded 1,000 yards in width as it reached peak intensity and descended over 500 feet into a valley. A stationary vortex developed at the bottom of the ridge. Some trees were uprooted and even thrown. Any that were not felled were cleanly snapped at various heights, and some appeared to be partially debarked. The trees in this mature forest were both hardwood and softwood. Today, 100% treefall of a mature forest can be used as a basis for an EF3 rating on the Enhanced Fujita scale.

Soon after the stationary vortex, the tornado achieved a maximum estimated width of 1200 yards (nearly 7/10ths of a mile). It is worth noting that it is extremely rare for a tropical-spawned tornado to achieve such a width, and makes it one of the widest tornadoes ever recorded in the area. Within that broad area of light-moderate damage were several more swaths of heavier destruction. Much of the path was logged, so the full extent of those portions is somewhat unclear. Soon after reaching its maximum width, the tornado began to gradually narrow and weaken. The intermittent areas of highest intensity continued but gradually became smaller and weaker. Still, the tornado continued for almost three and a half miles further into the mountainous forest areas. Larger areas of straight-line wind blowdown also began to encompass the path of the decaying tornado, making it challenging to map. Eventually, it dissipated at an altitude of 2,167 feet above sea level, 8.5 miles northwest of Madison. The lowest ground elevation of the center of the tornado along the path was 562 feet, making for an overall elevation change of 1,605 feet. The path length was 11.5 miles, making this event unusually long-tracked, intense, and wide for a tornado spawned by a tropical cyclone. The estimated average forward speed of the tornado was 40-50 mph.

Ultimately, the storm caused an estimated 9 million dollars of damage in the Stanardsville area. Three people were injured, five homes destroyed, and 40 others with some form of damage. Had the tornado began further south or the track shifted a mile west, the impact could have been vastly worse. The community quickly banded together and recovered in remarkable time from the disaster. A pastor from Charlottesville, VA brought money collected from his congregation to Winston Morris. Both the American Red Cross and a local restaurant bought him food. With the help of his family, he was able to quickly rebuild his home. The Red Cross also assisted others in the aftermath of the tornado. The Greene Hills Club was also able to bounce back. Although thousands of acres of trees were logged along the path of the tornado, the forest areas fully recovered as well, today bearing little to no trace of what happened on September 17, 2004.

A special thank you to the editor of the Greene County Record, Terry Beigie, and the Warning Coordination Meteorologist of the NWS in Sterling, Christopher Strong, for their help. 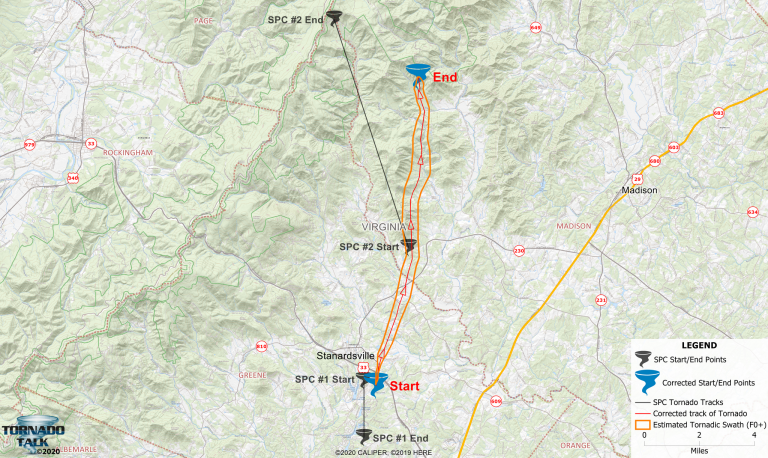 We gathered information for this event from the SPC & NCDC Databases, the September 2004 Storm Data Publication (SDP), and old NWS Baltimore/Washington even summary page, and Nelson Tucker’s analysis and found the following differences: