What we thought was going to be a rather straight-forward tornado event, has turned out to be a difficult one! There have been 2-F3 tornadoes that have occurred on November 8 on record. We chose one of these as the topic of this summary.

It was an F3 that according to the SPC Database moved through parts of Wilson, Edgecombe, and Bertie Counties in North Carolina.  As we started to explore the details of this event though, we began to notice some irregularities in the record. So, it was time for us to put back on our Sherlock Holmes hat and try to deduce what happened.

We will lay out all of the data and show that we actually had two tornadoes move through this area not just one.

Here are the SPC stats on the event:

Note: The CDNS gives the location as Wilson, Edgecombe and Bertie Counties. There is NO mention of any towns. So, it is very unclear based on their summary where all of the damage occurred.  You have to go to other sources to try to figure that out.

They list a path length of 40 miles, slightly shorter than SPC.

Here is some additional information from Thomas Grazulis in Significant Tornadoes:

So, we already have discrepancies in the total path length and the counties to include in the path. We started looking at newspaper articles and found damage reports near Rocky Mount (Edgecombe County) and in the Saratoga-Stantonsburg Community (Wilson County). It is in this Wilson County community where we find the damaged school mentioned in CDNS. It is called the Speight School. We did not find any reports of damage in Bertie County. That doesn’t necessarily mean there wasn’t any. Our search on newspapers.com did not yield any reports.

We seem to be narrowing in on the areas that had damage.  We mapped the SPC coordinates to see if that included the communities that were mentioned in newspapers articles and by Grazulis.  Here is that map: 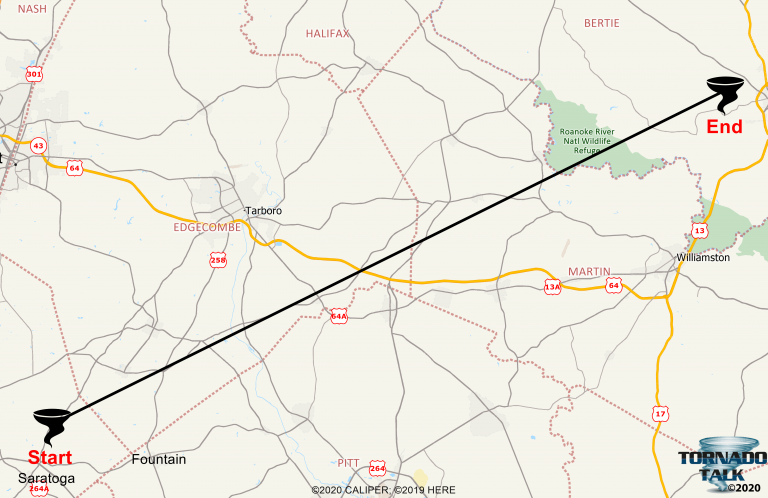 This doesn’t really help capture how the tornado traveled. The SPC path is nowhere near Rocky Mount. The starting point is north of Saratoga/Stantonsburg. The path barely clips Edgecombe County. It goes into Martin County and that is not included by any source as being in the path.

There are 2 conclusions we can make here:

We may never know for sure but our leaning is toward two separate tornadoes. We have read through several newspaper articles. Based on their descriptions of what happened, the Stantonsburg tornado and Rocky Mount tornado were looked at as different events.

In the November 10, 1957 edition of the Rocky Mount Telegram, it includes an article entitled, “Nature Forces Still Tough.”  It states, “Nature gave North Carolina a little roughing-up as the weekend started – a series of tornadoes, twisters and windstorms”.  The news swirling at the time indicated more than one tornado in the state. Officially, the CDNS recorded three wind events and one tornado for the state on November 8, 1957. 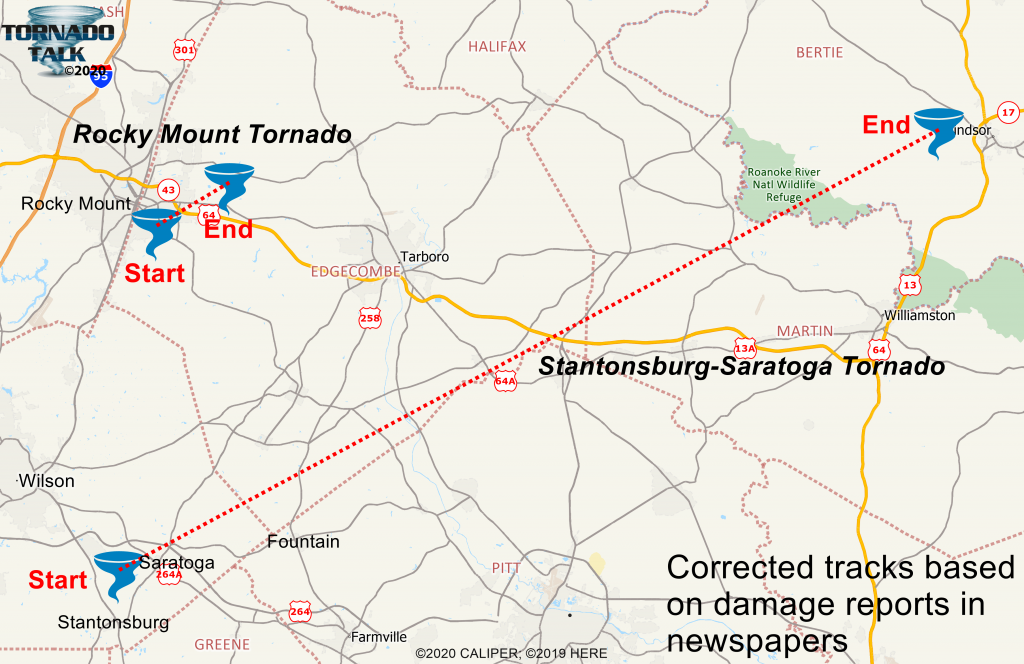 Note: End point is same as SPC. No details are available in newspapers of the damage in Martin and Bertie Counties, therefore a corrected end point can’t be determined. The Starting point has been updated to take the track over the Speight School that was destroyed.

Coordinates based on damage reports in Newspaper:

Here are some of the details from newspaper reports.

Details below from the November 9, 1957 edition of the Rocky Mount Telegram accessed via newspapers.com.

Details below from the November 9, 1957 edition of the Rocky Mount Telegram accessed via newspapers.com. Note:  They talk about the Speight School and mention it is near Saratoga.

Details below from the November 9, 1957 edition of the Gastonia Gazette accessed via newspapers.com.

One of the most detailed accounts from Wilson County comes from the November 10, 1957 edition of the Rocky Mount Telegram accessed via newspapers.com.  We have added a clip of the entire article below. 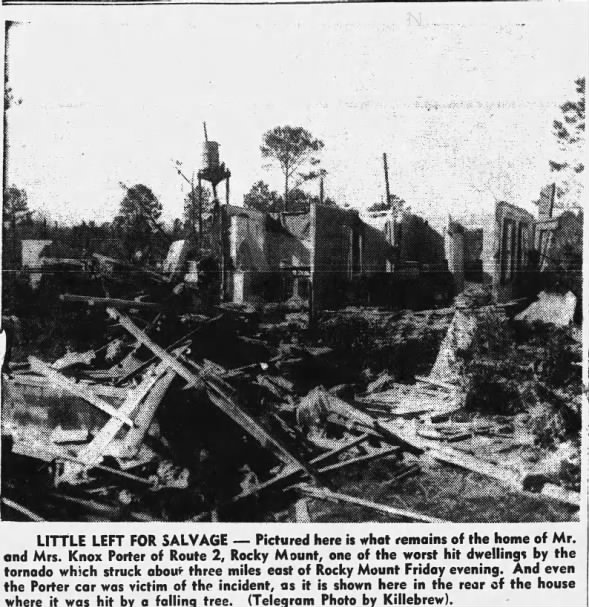 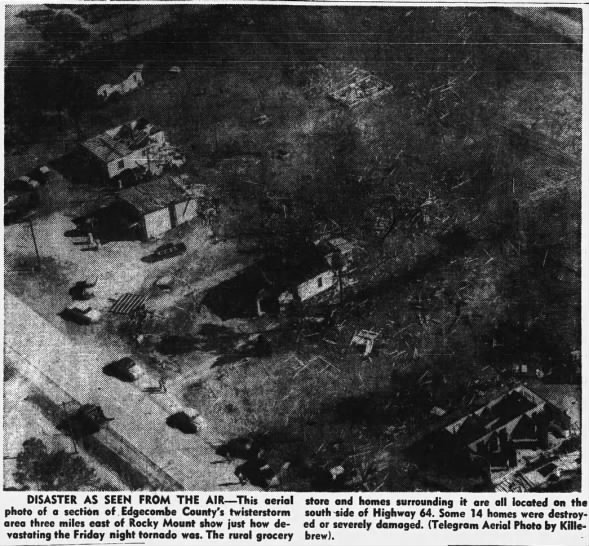 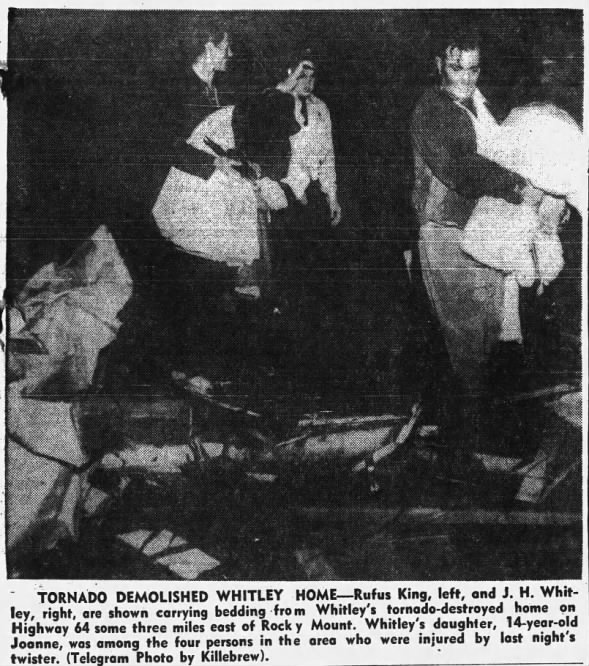 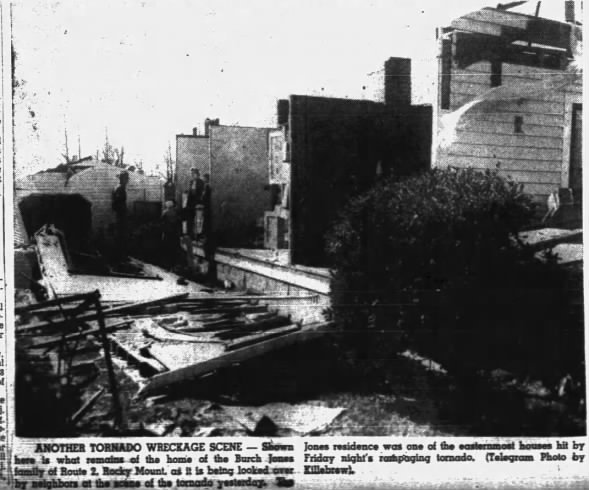 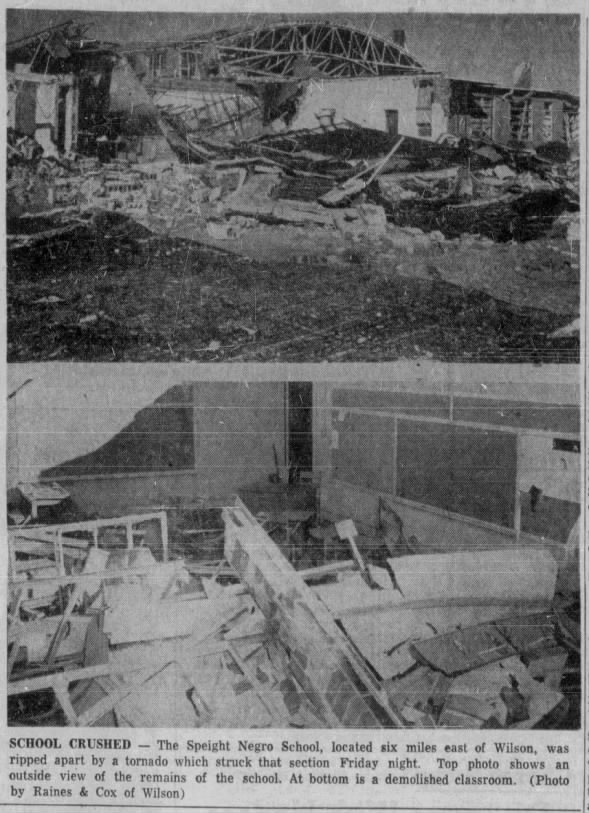