15 tornadoes occurred on March 11, 2006.  Half of them were in the state of Missouri.  We look at one of the strongest for the day and the event where fatalities occurred.

There was a little confusion on which counties to include in the path: the starting latitude and longitude point in the SPC database lands in Perry County, MO.  Though, the NWS summary states that the tornado began in St. Genevieve County and moved into Perry County.  There is an entry in the NCDC database for St. Genevieve County with a starting lat/lon of 37.75 / -90.12.  The ending lat/lon is 37.78 / -90.05.  The SPC entry is incorrect.

Per my research, this tornado started in St. Genevieve Co., MO, and traveled 4 miles.  It then moved into Northern Perry Co., MO, where it tracked 7 miles. At Old River, it moved into Randolph County, IL, for 22.5 miles and then made a trek into Perry Co., IL., where it dissipated as it crossed Route 51.  The track here was 20 miles long.

I have changed the starting lat/lon on my map to equal what I have above for St. Genevieve County.  The path ends in Perry County, IL, and I use the SPC coordinates.

One last note:  I found a summary page from the NWS St. Louis on their website.  They state the path length was 57 miles. This may have been written before the tornado event was submitted into Storm Data.

Here is the full summary from the NWS:

The fourth tornado from the Southeast Missouri supercell formed in extreme southwest Ste. Genevieve County and went on to be the longest and strongest of the four tornadoes.  The tornado formed about 9:20 pm CST just east of Route WW and one mile north of Holmes Road.  On Kramer Road, just off Route N, the tornado produced F2 damage that was at least 400 yards wide.  A double-wide mobile home was rolled about 150 yards and completely destroyed.  Two occupants suffered serious injuries.  Two other mobile homes in the area were also destroyed, along with two barns, a machine shed, and a detached garage.  The tornado continued northeast and tracked into northern Perry County.

The tornado entered Perry County from Ste. Genevieve County near Highway NN and just west of the community of Giboney.  The tornado moved northeast, crossing Interstate 55 only about one-half mile from the Ste. Genevieve County line.  Two fatalities and F3 damage occurred in the vicinity of where the tornado crossed U.S. Route 61.  The two fatalities occurred on U.S. 61, where a vehicle was picked up and thrown into a propane tank.  The truck in which they were riding was likely picked up, flipped over, and slammed into the ground several times.  The coroner stated that the victims died instantly.  One of the victims was ejected from the truck, which then struck the top of a large propane tank.  Because of the ensuing propane leak, the victim still in the truck could not be removed until the following day, when the propane was off-loaded from the tank.  Both of the victims in the vehicle were residents of a mobile home who were trying to flee the tornado.  The home from which they fled sustained only minor damage.  At least four other people were significantly injured as they were picked up by tornadic winds and hurled 100 yards.  Their injuries were compounded by wind-blown debris.  Eight victims were admitted to a local hospital to remove debris which penetrated their bodies, and two others were sent to regional hospitals for serious injuries.  Three mobile homes were flattened, a brick house had its roof and several walls blown off, and numerous vehicles were tossed around.  A total of about a dozen residences were destroyed or severely damaged in Perry County.  Perry County was designated a federal disaster area, enabling individual residents to apply for relief.  The dashboard camera in a sheriff deputy’s patrol car captured the tornado on film as it crossed U.S. 61 at F3 intensity.  Peak winds were estimated near 170 MPH.  The tornado crossed into Randolph County, Illinois at Old River, near some railroad tracks about 1.5 miles southeast of St. Marys.

The fourth tornado from the Southeast Missouri supercell crossed into Randolph County Illinois about 9:47 pm CST moving across the southern portion of Kaskaskia Island.  Debris originating from near St. Marys, Missouri was found in some fields on the island.  Numerous snapped or uprooted trees were found on the island.  The tornado crossed the Mississippi River on the north side of Chester with a damage path about 300 yards wide.  F2 level damage was found just north of the Chester Correctional Center where a number of trees were leveled or snapped off.  The tornado produced F1 damage at the Gorden Bud Cohen Recreational Complex where three wooden light posts were snapped off near the base, and several ball fields backstops and fences were blown over.  Just to the east, three large pole barns and several outbuildings were destroyed, and a house had roof and exterior damage.  The damage at this point was 300 yards wide and rated F2.  The tornado continued to produced F1 to F2 damage along the remainder of its path through Randolph County with a nearly continuous 300 yard width.  A Notable area of F2 damage were found just north and northeast of Bremen along Highway 150.  This damage consisted of metal high power electric towers blown down, a destroyed mobile home, a number of destroyed barns and metal outbuildings, roof and exterior damage to several homes, and numerous trees uprooted. F2 damage was also found near Highway 150 about 1.5 miles west of Steeleville.  The rear portion of a house had considerable roof and structural damage, several detached garages were destroyed, at least 5 metal outbuildings were destroyed, several barns destroyed, signs broken, and trees and power poles snapped.  The tornado finally exited Randolph County about 1.5 miles south of Highway 154 on County Line Road about 10:15 pm CST.

The tornado entered Perry County, IL from Randolph County about 1.5 miles south of Highway 154.  The Perry County segment of the tornado was rated at its maximum intensity and width shortly after crossing the county line.  Shortly after crossing into Perry County, some coal trucks were blown over, and a modular home was totally destroyed on Route 154 near Route 150.  Two persons in the home were trapped inside for a time, but they sustained only minor injuries that were treated at a local hospital.  Route 150 was closed for 12 hours due to downed trees and power lines.  Within a few miles of the destroyed modular home, some hogs were killed at a hog farm, and an empty grain bin was picked up and blown 100 yards into a field.  Several eyewitnesses at this location reported two funnels.  As the tornado continued its northeast movement, passing northwest of Pinckneyville, it weakened to F1 intensity.  Near where it crossed Illinois Route 13, trees were uprooted, roofs were blown off, and power poles were snapped.  Siding was blown off a house.  Near the end of the tornado track, just northwest of Tamaroa, a metal building was destroyed.  Debris from the building was blown about 400 yards.  A nearby house lost all of its shingles.  Along the 20-mile path through Perry County, dozens of barns and outbuildings were severely damaged or destroyed.  Dozens of homes sustained varying degrees of damage, ranging from minor to major.  Hundreds of trees were uprooted or snapped.  Peak winds on this county segment were estimated at 140 MPH, mainly near the Randolph County line.  The average path width was close to 200 yards.  A deputy sheriff reported a tornado crossing U.S. Highway 51 north of Tamaroa.  This was the last evidence of the tornado, which likely dissipated as it crossed Route 51. 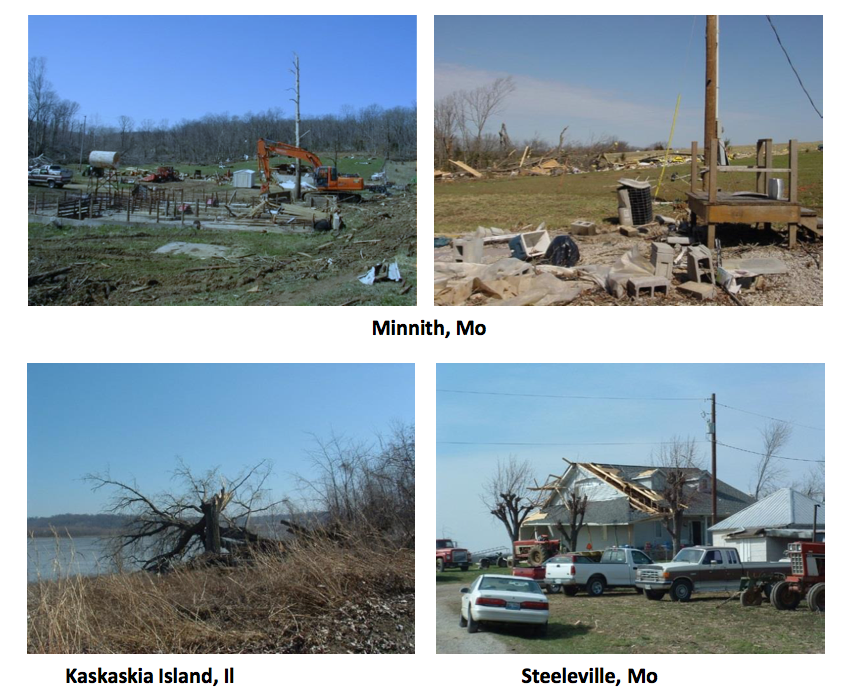 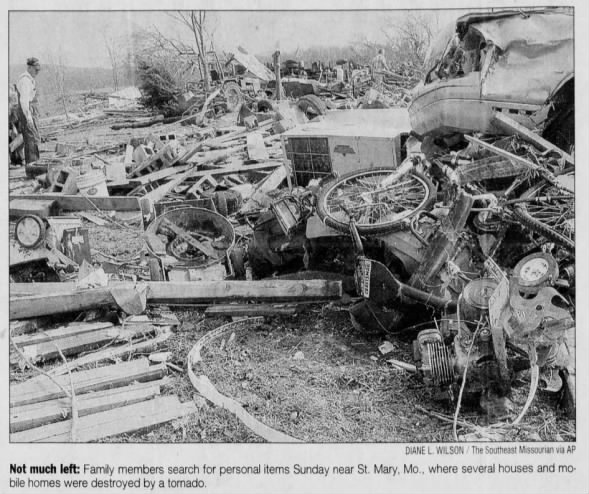 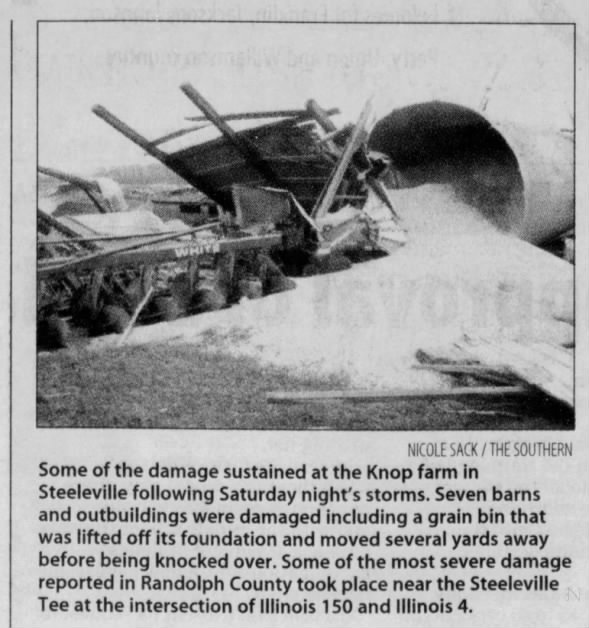 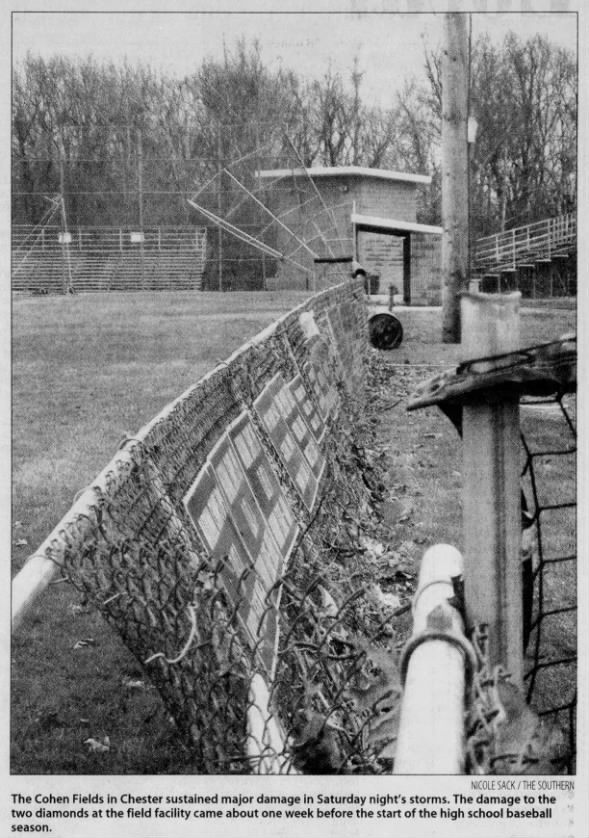