During the midday hours of April 24, 2010, a destructive long track tornado made a 149 mile journey across 1 parish in Louisiana and 8 Counties in MS.  It formed just south of I-20 west of Tallulah in Madish Parish, LA and dissipated 5 miles north of Sturgis, MS in Okitebbah County.  Actual time on the ground:  2 hours and 44 minutes.  In Yazoo County, MS, the twister reached its maximum width of 1.75-miles – the widest in the state’s recorded history at the time. It held that record for the widest in state history until April 12, 2020, when an EF4 that had a width of 2.25-miles, hit Bassfield. Along the path there were 10 fatalities reported and 146 injuries.  The tornado was rated EF4 with estimated max winds of 170mph.

The start of the long-track violent tornado began around 6 miles west of Tallulah, just to the south of I-20. This tornado did not waste any time becoming strong and quite wide as it downed a few high tension truss towers on the south end of I-20. As the tornado crossed the interstate, a tractor-trailer was flipped over and thrown opposite of the initial traveling direction. The driver of the truck was injured as this occurred. The tornado then traveled quickly northeast and crossed Highway 80 and Willow Bayou Road, just to the northwest of Tallulah. Here, several homes were heavily damaged along with several vehicles and tractors damaged. The tornado continued to the northeast and crossed Highway 65 and then tracked across the Mississippi River and into far northwest Warren County at Eagle Lake. This tornado destroyed a chemical plant near Highway 65 and the Mississippi River levee, in the community of Omega. A few rail cars were rolled off the track at this location and a large crane was flipped over and destroyed. Several storage tanks were severely damaged as well at this location.  The tornado produced mainly EF3 and EF2 damage across Madison Parish with maximum winds around 155 mph. Timber and power line damage along the path was substantial with dozens of power lines taken down along with thousands of trees snapped and uprooted.

The tornado crossed the Mississippi River and entered northwest Warren County at Eagle Lake. Roughly, thirty homes were damaged or destroyed in this area along with 13 mobile homes. In addition to the damaged structures, hundreds of trees were snapped and uprooted along with many power lines taken down. The damage across this part of Warren County was in the EF2 range with maximum winds around 130 mph.

The tornado moved into Issaquena County from Warren County and mainly tracked across forested portions of the county. The tornado did track across US Highway 61 just a couple miles south of Valley Park. Thousands of trees were snapped and uprooted along the path with one abandoned agricultural building destroyed. The tornado had EF2 intensity with 130 mph winds across Issaquena County.

The tornado moved out of extreme southeast Sharkey County and into west central Yazoo County and gained intensity as it tracked northeast. The tornado caused significant home damage northwest of Satartia, and again as it crossed Highway 3 near the Crupp Community. The tornado then moved through a rural area southwest of Yazoo City, causing major damage or destruction of a number of homes, as well as intense tree damage. As the tornado approached the intersection of US Highway 49 and Highway 16, on the south side of Yazoo City, it reached its widest point and maximum intensity. Here the rating peaked at EF4 with maximum winds around 170 mph. The tornado had a maximum width of 1.75 miles. Several buildings, including a church and several businesses, were totally destroyed. The tornado continued moving through residential areas on the southeast side of Yazoo City, heavily damaging or destroying numerous homes. The tornado continued northeast through rural northeastern Yazoo County before it tracked into Holmes County.  A total of four fatalities occurred in Yazoo County. All of the fatalities were individuals who were in mobile homes.

The tornado continued northeast into rural southern Holmes County, causing intense tree damage and damaging or destroying a number of rural residences. The damage across this area was in the EF3 range. As the tornado moved by the Franklin Community, in rural Holmes county, it again reached EF4 intensity. It completely destroyed two brick homes and heavily damaged or destroyed a number of other homes. The tornado then crossed Interstate 55, causing significant tree damage and blowing a number of vehicles off the road. As the tornado approached the area just south of Durant and crossed US Highway 51, it narrowed and reached one of its weakest points. One fatality occurred in Holmes County.

The tornado moved into Choctaw County and crossed Black Road around 128 pm. Here, minor damage occurred to a brick home. Tree damage in this area was more substantial and was in the upper EF2 range. Thousands of trees were uprooted and snapped. Many trees were also splintered in this area. The tornado then crossed Highway 413, just east of French Camp. The tornado reached high end EF3 intensity at this point and produced significant structural damage to a number of structures. Wind speeds ranged from 155 to 165 mph at this location. Three well built brick homes were nearly flattened with only 1 outer wall left standing. Other well built structures sustained major damage to the roof. The Crossroads Grocery was destroyed as the cinder-block structure collapsed on itself. Several vehicles were thrown in this area including at semi-truck. A cell tower was snapped in half. The intense damage continued along the track across Stuart-Weir Road and White Road. Several more structures were severely damaged or destroyed in this area along with significant devastation to timber. Along Pisgah and Dotson Roads, some of the most severe damage occurred and this was the location of the 5 fatalities. Here, dozens of mobile homes and conventional foundation homes were destroyed. Multiple vehicles were thrown with a few landing in trees. The widest part of the tornado was in this general area where it was 1.07 miles wide. The EF3 intensity damage occurred for about 4 miles. The tornado weakened as it tracked toward the Chester Community and crossed Weir-Salem Road and Chester-Mills Road. Here the damage was mostly tree damage with a dozen of homes or so receiving minor to major damage. Some homes had a small portion of roof torn off or shingles peeled away. One well built home was shifted off the foundation with a portion of the back of the home collapsed. Again, timber damage was significant with a large area of pine forest heavily damaged. EF2 damaged was noted there. The tornado continued through Chester and toward Highway 9 and Highway 15. Here mainly EF1 tree damage occurred. The only exception was at and just to the east of the intersection with Highway 9 and Highway 790. Here some low end EF2 tree damage was noted. The tornado then crossed Highway 15 and continued just along and to the south of Macedonia Road. EF1 tree damage occurred in this area as well. The tornado continued into Oktibbeha County just east of of the Reform-Sturgis Road.

The tornado moved into west-central Oktibbeha County and tracked along Big Creek Road and Simmons Road before dissipating at Sturgis-Maben Road about 5 miles north of Sturgis. Many trees were snapped and uprooted as the long-track tornado came to an end. 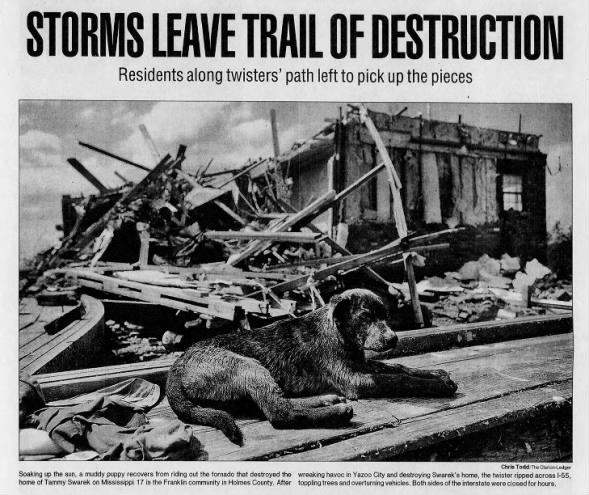 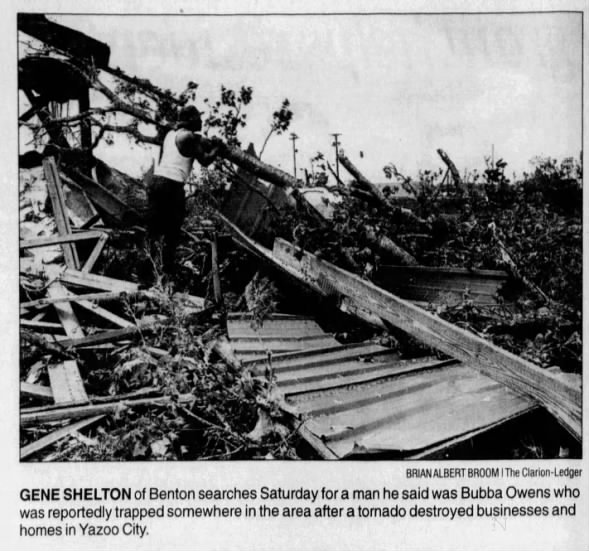 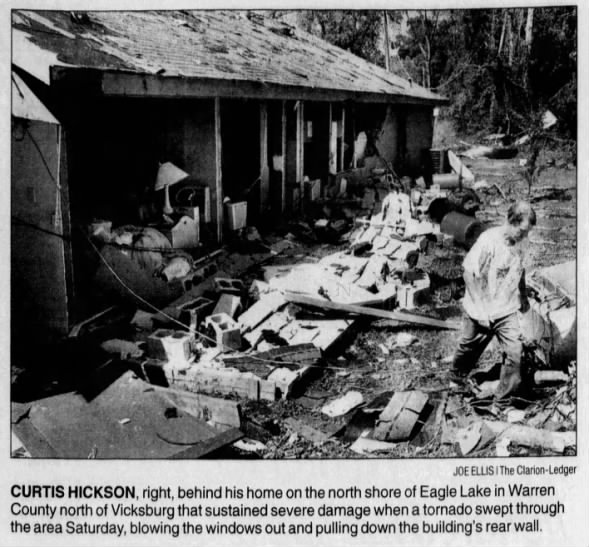 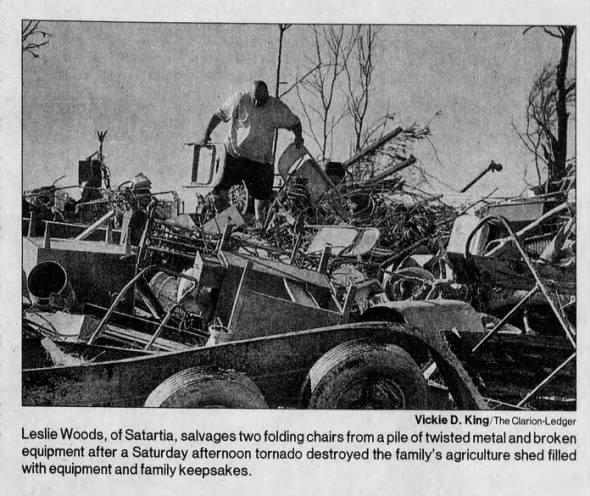 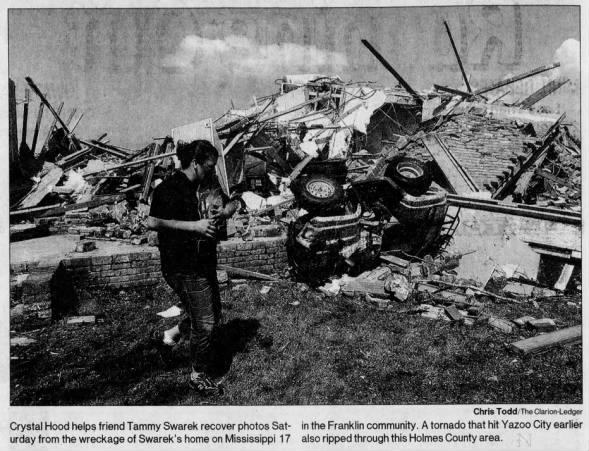 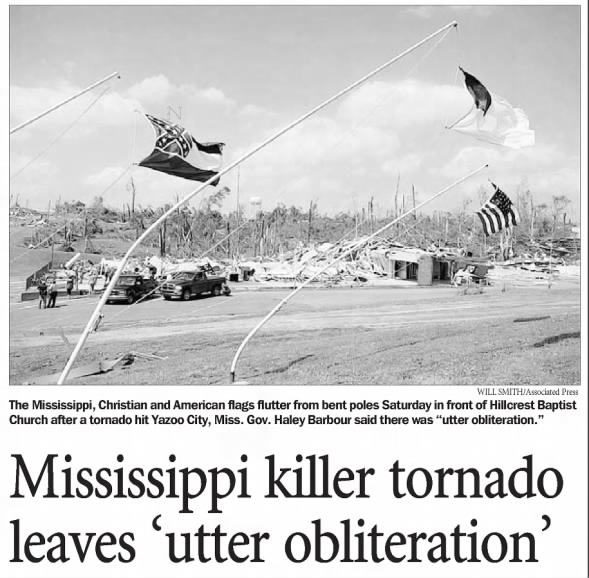