In this summary, we look back at May 6, 1930 and two tornadoes in two different areas of Texas that caused widespread devastation.  They were later given ratings of F4.  Details about the events from Thomas Grazulis in Significant Tornadoes (1680-1991).

This tornado tracked NE from near Bynum, Irene, Mertens and through the town of Frost.  Total path length of 35 miles through parts of Hill, Navarro and Ellis Counties.   The max width was estimated at 500 yards.  There were 41 fatalities and 200 injuries reported.

Several farms were devastated south of Bynum and Mertens in Hill County. 16 deaths occurred in this area.  The entire town of Frost was destroyed.   At least 22 people were killed.  Only three brick buildings remained standing.  “The death toll of 22 at Frost was set only two days after the event.  At that time, there were still over 50 people hospitalized, so the death toll may have gone higher.” (Grazulis, 834)

Near Frost, three teachers and 75 students huddled in culverts and ditches as the school was hit.  Two teachers and 20 children were injured by flying debris.  It was mentioned that the roar was heard 10 miles away.

Other deaths were reported south of Rankin, south of Bardwell and near Ensign (Ellis County).  Also in Ellis County, a train, seeing the tornado in the distance, backed up  toward the southeast, allowing the twister the right-of-way. 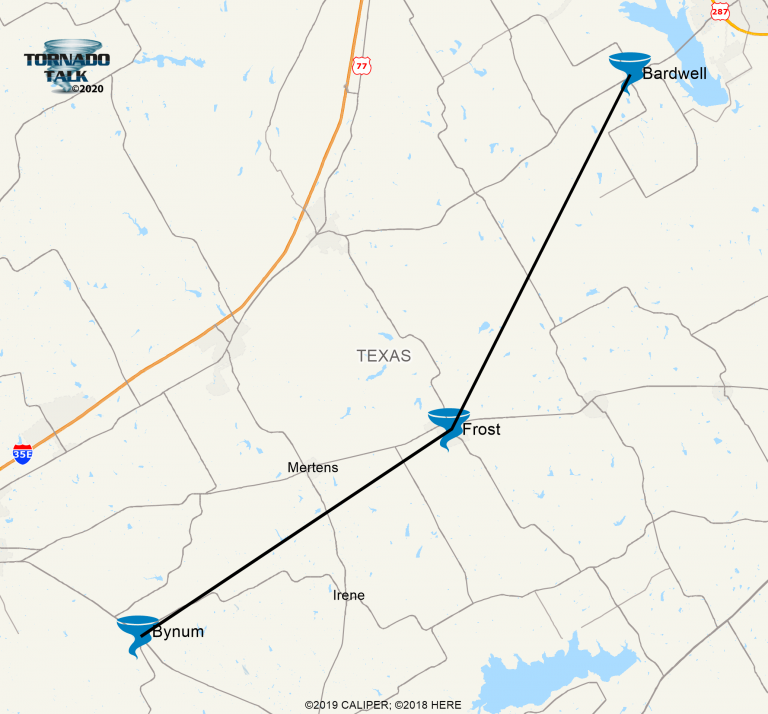 This is an estimated tornado path based on communities mentioned in Significant Tornadoes.  Put a start point at Bynum.  The tornado went through Frost.  Ending point near Bardwell. 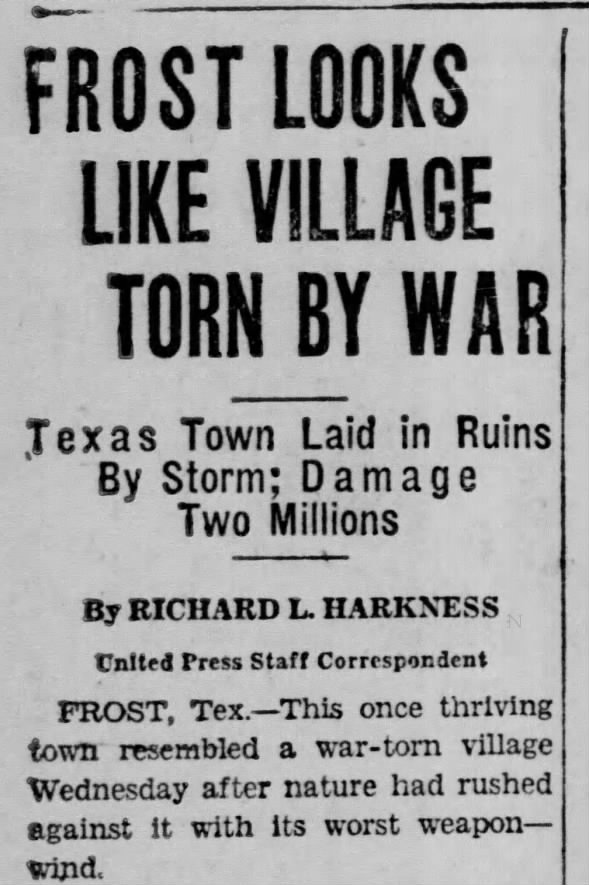 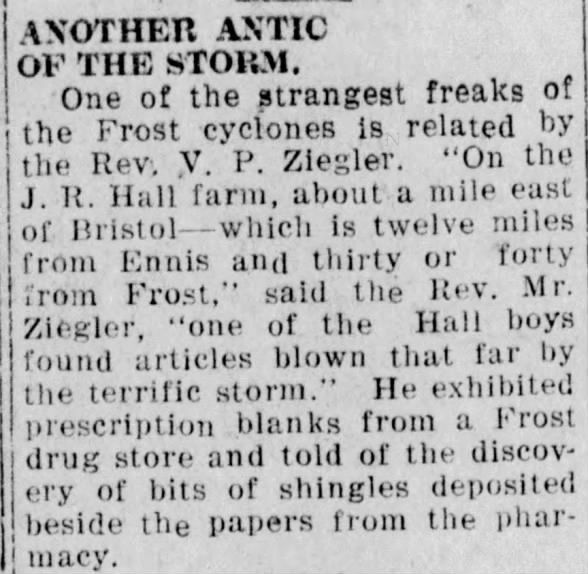 Stats from Thomas Grazulis on this tornado:  Had a 20 mile path through parts of Karnes and DeWitt Counties.  The max width was estimated at 300 yards.  There were 60 injuries and 36 fatalities.

This tornado tracked through frail housing causing utter devastation.  Many homes of all different sizes were swept away.  Most of the damage was to the homes of “Mexican tenant farmers”. There were located 3 miles north of Kenedy, 3 miles south of Runge and 3 miles south of Nordheim.

“One home had nine deaths, and the bodies were scattered across 300 yards of adjacent fields.” (Grazulis, 834). Another 7 people were killed in 5 homes that were “just swept to bits.” 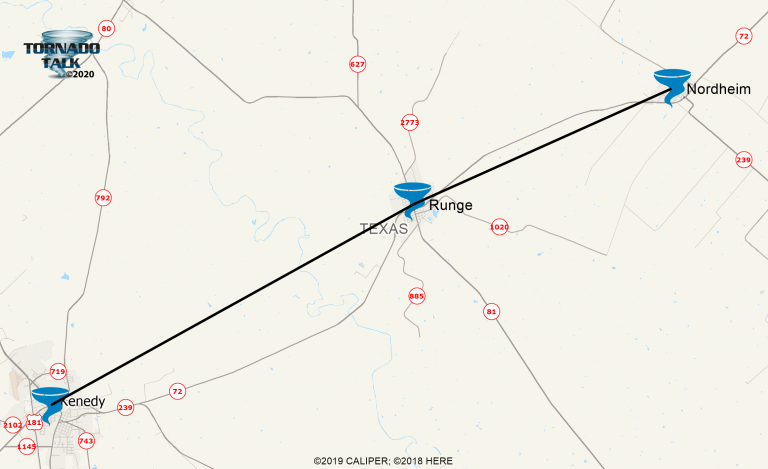 This is an estimated tornado path based on communities mentioned in Significant Tornadoes.  Damage found 3 miles N of Kenedy, 3 miles S of Runge, 3 miles S of Nordheim.  Placed points in those locations. 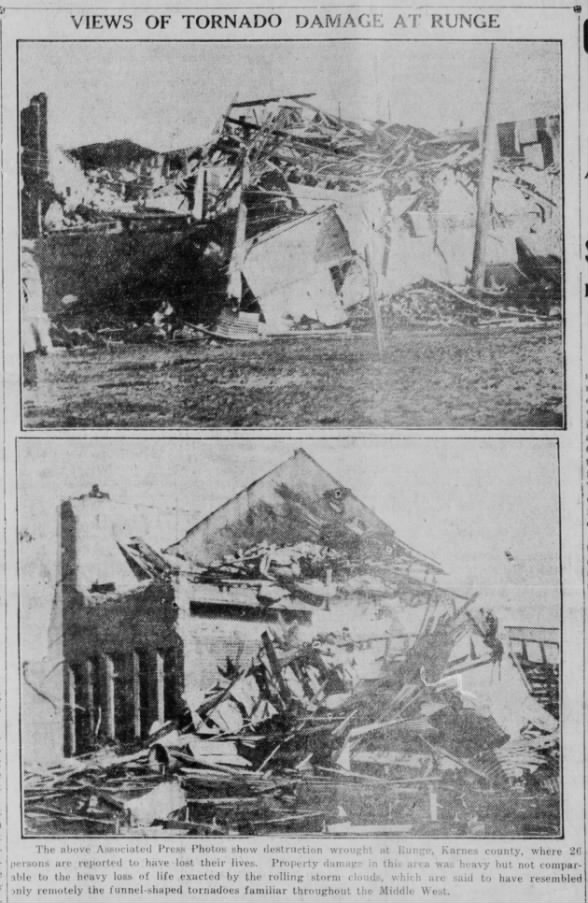 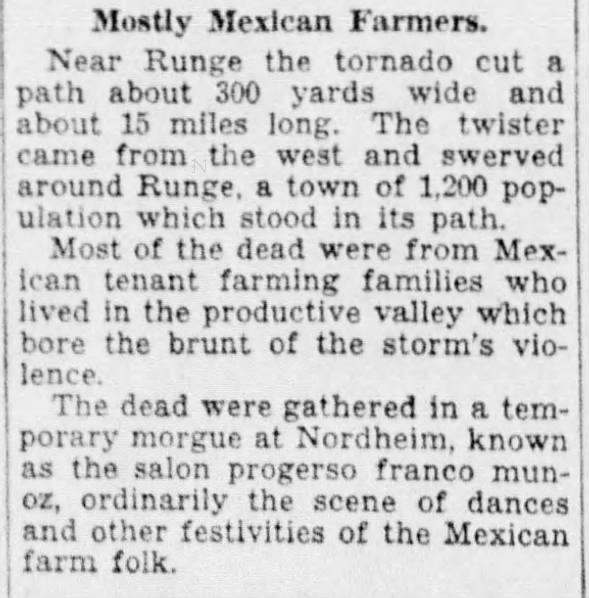