Say the words “Pilger” and everyone in the weather community knows what you’re talking about.  On the afternoon of June 16, 2014, a supercell thunderstorm would produce 5 tornadoes, one rated EF-0 and four rated EF-4, across northeastern Nebraska.  The town of Pilger was hardest hit when it took a direct strike from one of the EF-4 tornadoes.  The third EF-4 tornado, also known as “Pilger East” was likely the strongest tornado of the outbreak, but fortunately remained in rural areas.

The most remarkable thing about this outbreak was the “twins”. Tornadoes 2 and 3 (known as Pilger and Pilger East respectively) became two photogenic twins, at times moving around each other, and crossing paths. After tornado 3 dissipated, tornado 4 (Wakefield) and tornado 2 were twins for a short period of time.

GIF via the NWS Summary showing the supercell that produced the tornadoes.

On the Tornado Project website, Thomas Grazulis has an update about Significant Tornadoes 1680-2019.  He states the following:  “The cover of Volume II has photographs that are more personal.  The upper photo is Aaron Rigsby’s shot of the twin F4 tornadoes near Pilger, NE on June 16, 2014.  The two tornadoes crossed paths.  Many old newspapers told of tornadoes on the plains with huge multiple funnels and complex movements.  It was impossible to draw the path properly.” 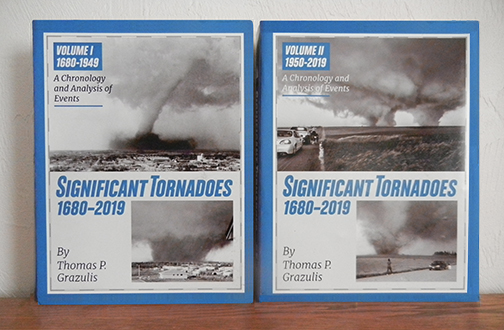 Significant Tornadoes 1680-2019, via the tornadoproject.com

This was the first violent tornado of the family.  It touched down at approximately 3:42 pm CDT and began moving northeast towards the town of Stanton.  It was initially weak, producing only EF-0 damage as it snapped some branches off of trees.  An area of high-end EF-1 damage was recorded southwest of Stanton as some hardwood trees were snapped.  It continued to the northeast towards Stanton, snapping more tree branches off trees.

The first area of significant tornado damage occurred to the west of Stanton, as some wooden power poles were snapped and a barn was completely destroyed.  Moving northeast, the tornado produced high-end EF-3 damage to the northwest of Stanton as it completely leveled 2 houses.  A nearby barn was completely destroyed and trees surrounding the area were snapped.  The tornado weakened to EF-2 intensity as it severely damaged the roof of one home and destroyed several outbuildings at a farmstead.

The tornado continued to move to the northeast and became violent, producing the first area of EF-4 damage.  2 homes were completely leveled and swept off their foundations, with one home being rated as EF-4 damage and the other home being rated as high-end EF-3 damage.  Nearby trees were severely debarked, and one barn was completely destroyed and swept off its foundation.  Continuing on a northeast track, the tornado produced another area of EF-4 tornado damage, as another home was completely leveled, a barn was completely destroyed, and trees were severely debarked.  Another house in this area that was hit by the outer edge of this tornado suffered minor damage.  The tornado weakened rapidly afterward, destroying one more barn before dissipating south of the Wayne County line at 4:11 pm CDT. 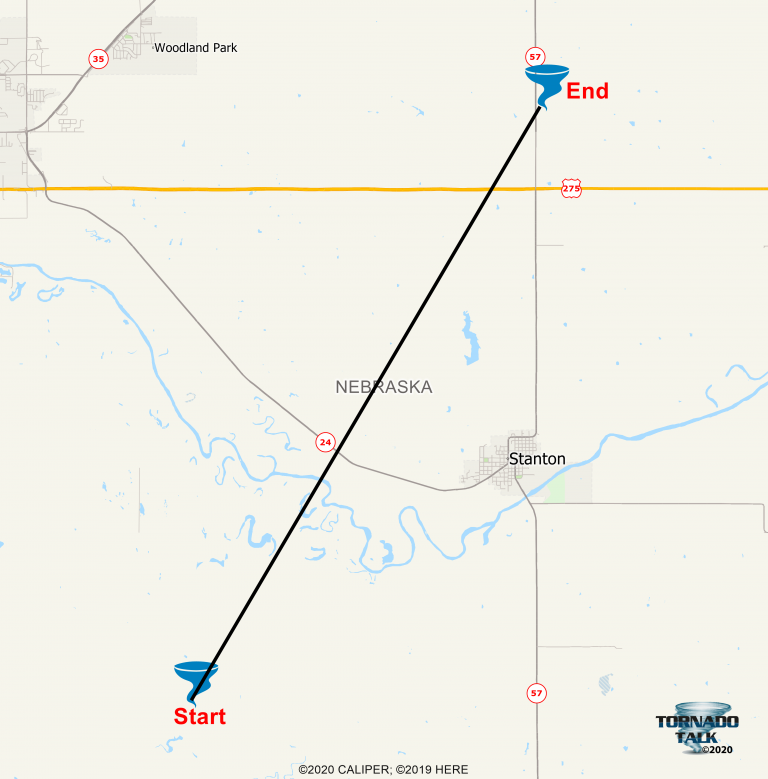 The second violent tornado and third overall of the tornado family touched down around 4:00 pm CDT about 5.5 miles to the southwest of Pilger in Stanton County, immediately showing a multi-vortex structure on video. Moving northeast, it rapidly intensified into a large stovepipe stripping corn from a field.  It completely destroyed multiple outbuildings as it passed over the Pilger Sand and Gravel Inc.  The average forward speed of the tornado was 28 mph.  It began to narrow as another tornado developed to its southeast.

Crossing over a river and Highway 15 with an already long swath of heavily disturbed dirt fields, the tornado made a direct hit on Pilger.  An exceedingly violent motion was captured on video along with an immense debris cloud. A narrow swath of high-end EF-4 damage occurred when over a half dozen homes were swept away leaving exposed basements or an empty slab; most had no connections, and the ones that did were poor.  In fact, video evidence shows one of these homes getting lifted into the tornado and being spun out.  An RV was blasted by the debris of one building, stripping away most of the body and dragging the chassis a short distance.  Hardwood trees were completely denuded and delimbed, snapped, and in some cases left very heavily debarked by the tornado.  A five-year-old died as the mobile home she had been in was obliterated.

The tornado continued through the heart of Pilger, striking a large grain facility in the center of town.  Massive silos were crushed, shredded, and large portions were thrown hundreds of yards by the tornado.  Cars and trailers were rolled and hurled.  One silo hit the eastern section of the Pilger Middle School, taking out the top story of that portion.  Multiple businesses were heavily damaged and more homes leveled.  A church was swept completely clean as the tornado left the town, leaving nothing but a bare slab and the nearby brick bell stand.  Debris was also wind-rowed hundreds of yards from multiple structures as the tornado left the town, churning up more unplanted fields as it moved along.

Tight but clear cycloidal markings were left in fields to the northeast of Pilger as it narrowed a little more, crossing into Cuming County.  Very intense tree debarking occurred in a grove of hardwoods.  It continued to shrink and weaken as the Pilger East Tornado grew still larger, then suddenly expanded into a large wedge of equal ferocity to its counterpart. An anchor bolted home was completely leveled at high-end EF4 intensity with a car thrown into the basement as the simultaneous EF-4 tornadoes passed within a mile of each other.

Crossing the path of the Pilger East Tornado, the Pilger Tornado continued on a north-northeast path into Wayne County, sweeping another home clean and debarking trees while the other tornado dissipated.  Another initially weak tornado developed to its east.  Pronounced cycloidal scouring marks were produced as a very sharp turn to the east-northeast was made, becoming very narrow in rope form as yet another home was swept away at EF-4 intensity.  It continued in this direction, collapsing a metal truss tower. Destroying another outbuilding and curving still more to the northeast as it rotated around the south side of the stronger Wakefield circulation, the Pilger Tornado dissipated after 39 minutes on the ground. 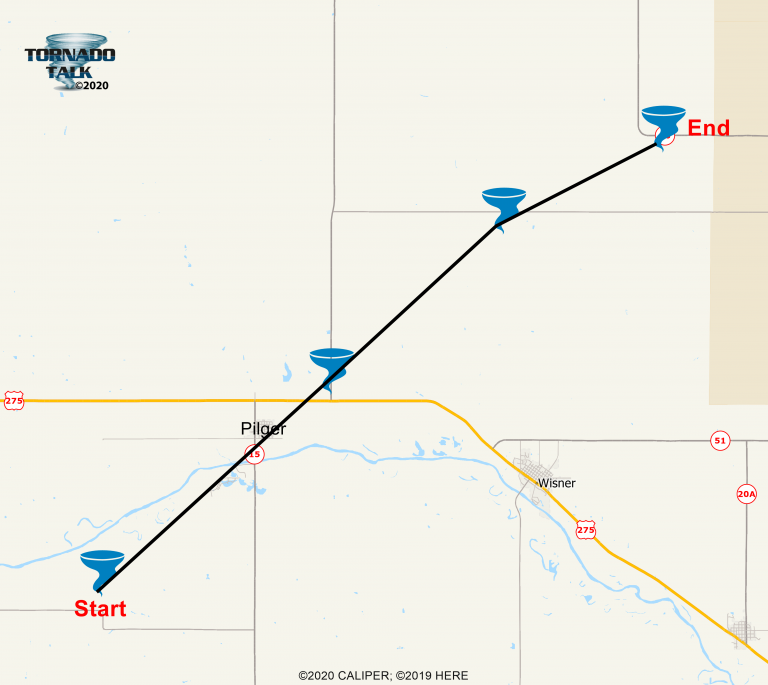 This tornado developed 2 miles southeast of Pilger as the tornado that impacted the town was ongoing.  It did not impact Pilger itself, but this tornado and the “Pilger” tornado had parallel tracks for several miles to the northeast of town.

In Stanton County, the tornado produced EF-1 damage as it struck one farm, destroyed outbuildings and blew down trees and power lines.  The tornado intensified as it crossed into Cuming County.  It crossed the Elkhorn River about 3 miles west of Wisner and then crossed Highway 275 where significant damage was done to a cattle ranch.  Over 300 head of cattle were lost here, as well as numerous outbuildings.

The tornado continued to the north northeast, running nearly parallel to the “Pilger” tornado for a time striking several farmsteads along 4 1/2 Road.  As the tornado neared X Road along 4 1/2 Road, violent damage was inflicted on two farmsteads.  The homes were completely destroyed down to the foundation.  Outbuildings were demolished.  Vehicles were lofted and trees were debarked.  It was in this area that this tornado produced what is arguably the most intense damage caused by any of the tornadoes on this day.

The funnel crossed into Wayne County, about 7.5 miles north of Wisner, and it weakened to an EF-2.  It continued for about 2 miles into Wayne County before roping out and dissipating.  As the tornado crossed into Wayne County, it hit a cattle ranch to the north of Y Road where over 300 head of cattle were killed.  Several outbuildings were destroyed.  As the tornado moved north northwest, while slowing, it impacted a brick home between 847th and 848th Roads.  The second story was removed as well as some outside walls.

A 74-year-old Clarkson, NE resident was killed when the vehicle he was driving was flipped by the tornado.

The NWS Summary, SPC and NCDC list the path length as 11.5 miles.  On the Damage Assessment Toolkit, the length is 12.05 miles.

The NWS Summary, SPC and NCDC list the path width as 500 yards.  The Damage Assessment Toolkit have a width of 990 yards. 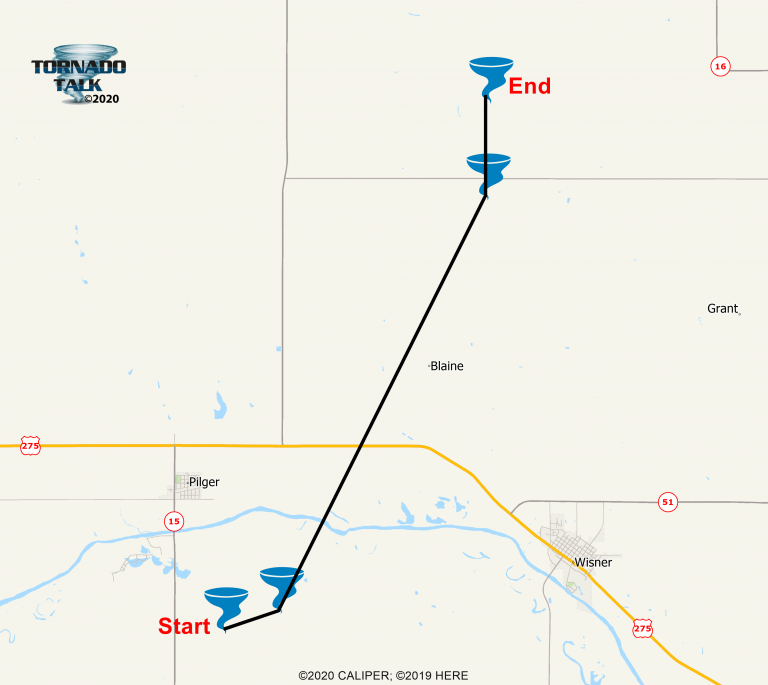 The last violent tornado of the family developed 11 miles south of the town of Wakefield.  It touched down right onto a barn, immediately causing EF-1 damage as the walls were collapsed.  Heading almost due east, it then began a smooth curve, to the north-northeast and a large barn was completely obliterated in EF-2 fashion.  Wood poles were damaged for the next mile of the path as the tornado moved due north.

Widening greatly, the Wakefield circulation sharply pulled the high-end EF-4 Pilger tornado around it to the south, which eventually dissipated as it drew closer.  For the next four and a half miles, spaced homes were consistently damaged at EF-2 strength as the circulation paralleled Highway 16.  It then dramatically intensified to EF4 strength.  Three homes in this area were completely destroyed and trees were partially debarked.  It intensified further and another home was fully swept away with partial ground scouring.  No more than EF-2 damage would be done to homes for the next few miles as the tornado passed about two miles east of Wakefield.

The last six miles of the tornado’s life was largely uneventful.  It had a somewhat narrow path and while causing distinct cycloidal swaths in fields for long distances, struck no DIs (Damage Indicators) capable of showing more than EF-1 damage. Telephone poles were snapped and crops were damaged.  The tornado dissipated about 6.75 miles east-northeast of Wakefield. 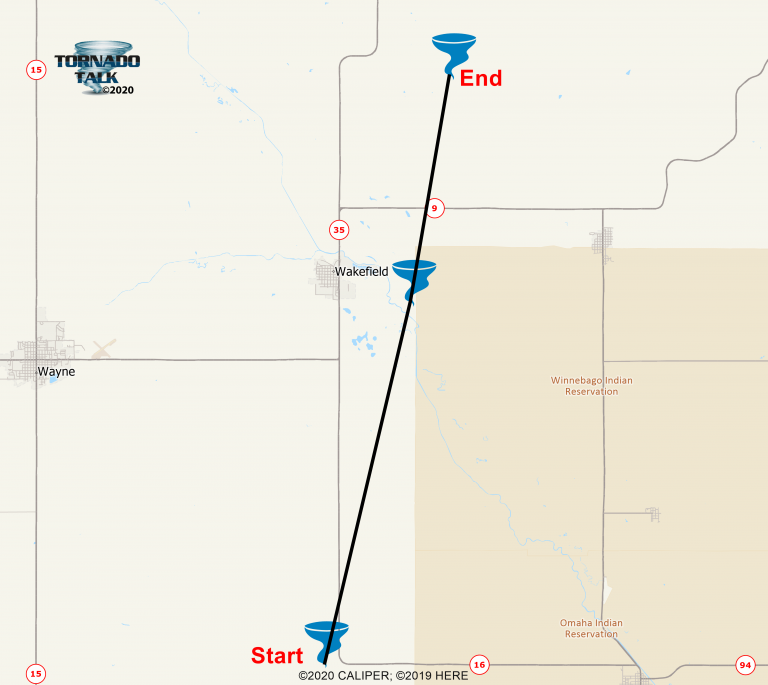 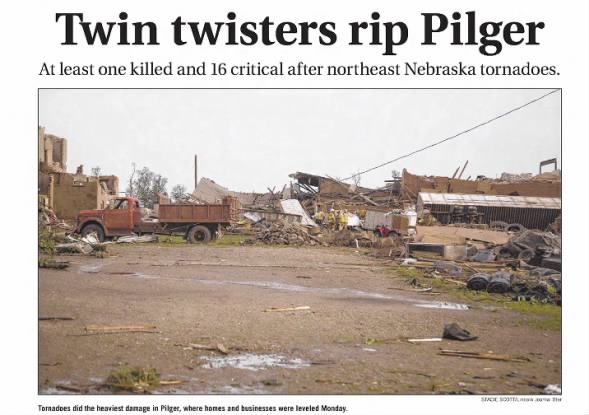 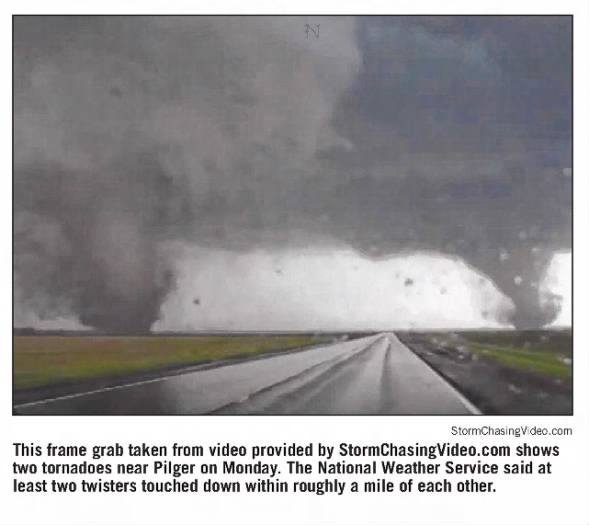 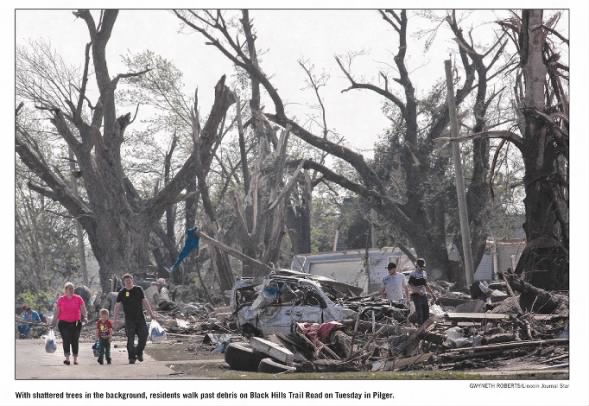 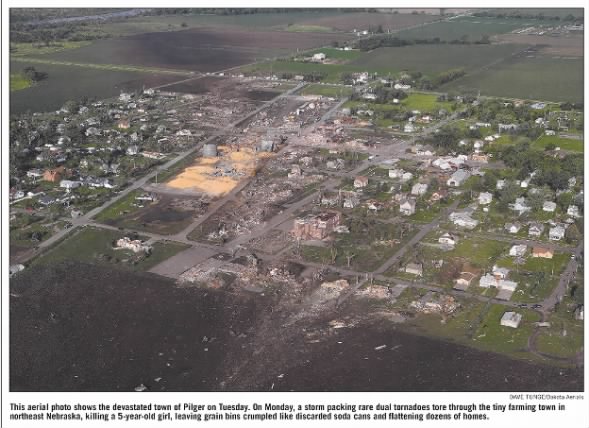 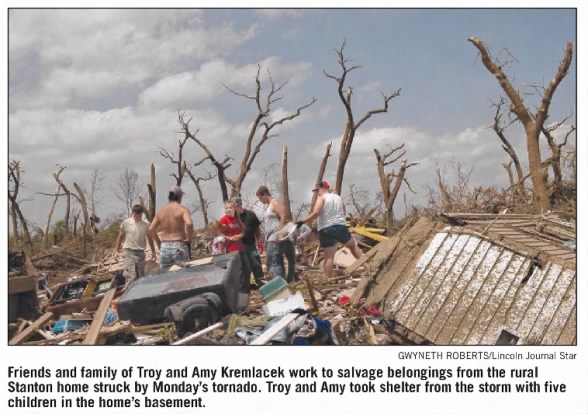 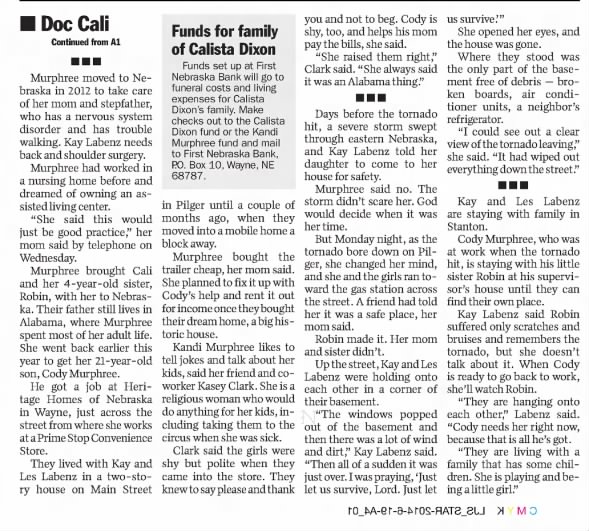 NWS Omaha Summary of the Event

The gathering of information, data and images for this summary was a collaborative effort.  Many thanks to Jacob Crawford, Gio Rizzotti, Nelson Tucker and Nick Wilkes (The Tornado Talk Crew) for putting together this overview.