The Red River Valley Tornado Outbreak, one of the most significant outbreaks on record for this region, occurred on April 10, 1979. Per the SPC Database, 25 tornadoes occurred mainly in TX and OK with one lone tornado in KS. Below are some quick facts about the event from the NWS Norman:

The focus of this summary will be on one of the tornadoes that occurred during this outbreak and one of the most devastating tornadoes in history:  The Wichita Falls F4 Tornado.

“The damage path was one of the widest I have ever seen, and its intensity was almost equal to that of the giant storm that leveled Xenia, Ohio, in the 1974 tornado outbreak.” – Ted Fujita

“The suffering and destruction caused by the Wichita Falls tornado is nearly inconceivable. The passage of a violent tornado through an 8-mile section of a city is an almost unheard-of natural disaster. In addition to the 42 fatalities directly caused by the tornado, three more people died of heart attacks and other illnesses during the stress of the tornado’s passage. The number of reported injuries approached 1,800 although hundreds of additional minor injuries were never recorded.” – Don Burgess, National Severe Storm Laboratory [Ret.]

I recommend the following in depth synopsis of the Wichita Falls Tornado from Don Burgess, NSSL [Ret.] – Link

Details from the Storm Data Publication:

The tornado began beneath the southwest flank of thunderstorm #3 about 3 miles east-northeast of Holliday in Archer County.  Witnessess say that several distinct small vortices were visible during the formative stage of the tornado, as it moved along the fort Worth and Denver Railroad into Wichita County.  Two oil-storage tanks were blown away and several homes were unroofed near Farm Road 2650 as the tornado approached Wichita Falls.  Six cross country steel transmission towers were destroyed just east of 2650.

About the time the tornado entered town, it changed in appearance, becoming one large black cloud of condensation and debris.  The tornado was about 0.5 miles wide when it struck Memorial Stadium, snapping the light snadards and causing heavy damage to the field house.

McNeil Jr. High School was next in the path of the tornado and the school was severely damaged.  The western portion of the school building was crushed by the intense winds.

The tornado then moved east-northeast into the Western Hills neighborhood, south of Southwest Parkway.  Several apartment complexes and many homes were destroyed, with several of the first deaths occurring in this area.  The tornado expanded in size as it crossed Southwest Parkway, throwing automobiles about and leveling a number of businesses including a bank and fire station.

The twister was almost 1 mile wide when it entered the Faith Village neighborhood on the north side of the east-west oriented Southwest Parkway.  Most of the homes in Faith Village were demolished.

Ben Milam Elementary School was heavily damaged as the cafeteria-auditorium was completely destroyed and exterior classrooms were pummeled by flying debris.  The inner hallways would have been the ony relatively safe shelter in the building.  Surprisingly, very few fatalities occurred in Faith Village.  Most people heeded the warnings and took shelter inside interior, small rooms in their homes.  Most of the destroyed homes had some of these interior walls still standing after the tornado.

Inside the mall, portions of the Pennys store collapsed while other stores sustained light to moderate damage.  Noone was killed and only several major injuries occurred among about one thousand shoppers who were in the mall.  The mall was on the north side of the tornado path and appeared to escape the most violent winds.  Near the center of the tornado and about 0.5 miles south of the mall, a church was demolished with one person killed inside of the building.

The tornado then crossed a short span of open fields before moving into the Colonial Park area.  More widespread home destruction occurred in Colonial Park and several more apartment complexes were demolished.  Heaviest damage in the apartments was to the second story of the two story buildings.

The tornado next swept through the Southmoor area, destroying homes and a shopping center.  After crossing Highway 281, the twister struck the Sun Valley neighborhood and destroyed additional homes, apartments, and businesses on the south side of Highway 287.  A large number of cars were smashed and some people were killed along 287.  Some of these people had stopped their cars under and overpass on the highway, seeking shelter from the storm.  The tornado leveled a mobile home park on the north side of 287, but residents had evacuated that area and no fatalities occurred in the park.  The tornado then destroyed several industrial plants before moving into Clay County just south of Highway 79.

The tornado was up to 1.5 miles wide as it passed through 8 miles of residential area in Wichita Falls.  The intense damage averaged between 0.25 and 0.5 miles in width.  42 people were killed outright by the storm and 3 other died of heart attacks.  Further statistics revealed that 25 of the deaths were auto-related.  16 of these 25 were people who entered their cars trying to evade the tornado.  11 of these 16 people left homes that were not even damaged.  8 persons were killed outside, 4 were killed in homes or apartments, and 4 others died in public buildings.

The tornado continued into Jefferson County, OK.  Here is the Storm Data Entry for that portion of the tornado path:

Tornado first touched down 3 miles east northeast of Holliday, TX and traveled northeast where it struck Wichita Falls, TX at 6pm.  It crossed the Red River into Oklahoma at 6:30pm.  Over 100 trees on both side of the river were uprooted.  After crossing the river, it made a gradual left turn to the north northeast and passed just to the southwest of Waurika.  It dissipated just before 7pm to the north northeast of Waurika.  Heavy rain and large hail, up to 3 inch diameter, were reported with the storm.

The path of the tornado in Oklahoma covered 11 miles.  The hardest hit area in Oklahoma was to the southwest of Waurika along Noble Wray Road.  Civil Defense reported some 20 homes damaged or destroyed in that area.  A new brick home was completely demolished.  A pickup was lifted off the ground and smashed into a nearby car.  Several mobile homes were destroyed.  One frame was twisted badly and carried 1/4 miles to the southwest of its original position.

Photos via the NWS Norman Overview

From the Texas Archive of the Moving Image – The reel, filmed the next day for KRLD-TV news, is composed of unordered clips of raw camera footage, both silent shots of the affected area as well as interviews with citizens who survived the storm. 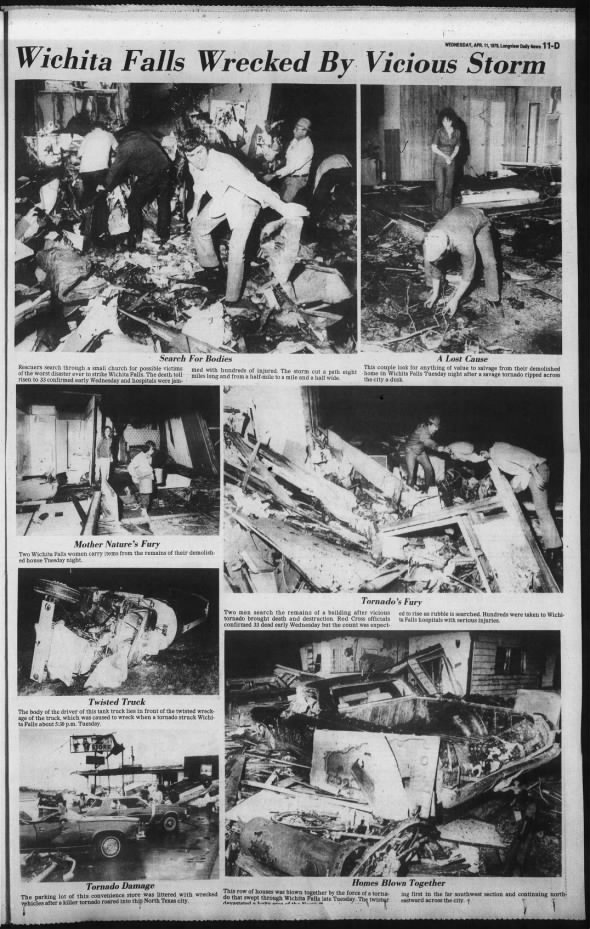 In Depth Overview of the Outbreak from NWS Norman