Coordinates Based on Correspondence with Thomas Grazulis:

On August 10, 1924, a localized tornado event took place in eastern Colorado, devastating the community of Thurman. While small in terms of how many tornadoes were documented, this was a historical event and remains the deadliest in Colorado state history.

During our exhaustive research, new details have emerged about this twister. It has been determined that an additional fatality can be attributed to this tornado, raising the death toll to eleven. We have consulted with Thomas Grazulis in Significant Tornadoes, and he accepts that evidence. He has also re-examined the path the tornado took, and those adjustments will be revealed in this summary. A big thank you to Jen Narramore and Thomas for their contributions to the historic findings in this summary.

In the 1880s, a group of Amish Mennonite settlers from Nebraska, Iowa, and Illinois sought cheap agricultural land. They homesteaded in Thurman, Colorado. Before 1888, they had established a church about one mile north of the town. In the early years of formation, the congregation experienced hardships such as crop failure and epidemics. By 1894, several families had left the community for more-promising agricultural lands. Later in 1916, a prairie fire ultimately razed the church, which was rebuilt in 1917. Despite all the hardships, the congregation eventually reached 64 members in the 1920s. During this time, part of the congregation included a farmer, Henry Kuhns, and his family.

The Kuhns were renting a home four miles east-northeast of Thurman. On Sunday, August 10, 1924, the family joined with others from their congregation for a celebratory feast to close the harvest season. A 27-person party of four families gathered at the Kuhns’ homestead.

While the women of the house were cleaning dishes and watching after the children, the nine men of the party were outside when they spotted at least one funnel in the area of a neighboring ranch to the north. From their perspective, it was unclear if what they had seen had caused damage. The men rushed to investigate to see if any immediate assistance was needed, leaving the 18 women and children back at the Kuhns home.

Upon finding no damage, the men made their return, only to see a tornado heading straight for the farmstead with their families inside, oblivious to the danger just outside. Per Thomas Grazulis, this tornado developed southwest of Thurman and passed south of town. It traveled east-northeast, right in the direction of the farm.

When the tornado moved over the property, the men were within 200 yards of the one-story house’s front gate. According to multiple sources, the home was lifted and thrown from its foundation, hurling the occupants inside through the air into nearby fields. All farm buildings on the Kuhns property were destroyed, including the home, multiple barns, and a chicken house. The visiting families’ three automobiles were tossed into surrounding fields and destroyed, chickens and hogs were killed, and crops were ruined. Additionally, communication lines were downed before the tornado continued away from the property through open fields, causing no further damage before dissipating.

An interview with 14-year-old Ervin Kuhns appeared in the August 15, 1924 edition of the Morgan County Republican. He was a member of the party who drove north to check on a neighboring ranch and witnessed the heartbreak unfolding at his family home.

“As we got near our home, suddenly, another one came tumbling and roaring from the west. My father turned in at the gate. The cloud passed over us almost taking away our breaths. There was a terrible crash and the barn and grain house in front of us were torn up by the black bottom of the cloud.

Then another crash, and the house where my mother and sisters and the other people were washing dishes was rent asunder. I remember seeing parts of the house and even indistinct figures of people whirling in the cloud.

Then my eyes blurred. Things seemed to begin falling from the air. Father drove to what we once called home but only the foundation was left. We heard moans and screams. We ran a little way from the house and I found mother.

Father and I took her up and she seemed to know who we were. She smiled and I think she faintly murmured, ‘God has willed it so.’ Those were her last words.”

When doctors and physicians arrived from the nearest towns of Akron and Flagler, they found everything demolished, with bodies scattered about. Immediate survivors were taken to nearby farmhouses to receive care for their injuries.

Initially, 10 of the 18 people at the Kuhns house were killed, with nine of them being children. The remaining eight people in the home suffered varying degrees of injuries. Henry Kuhns lost his wife, Maggie, and two of his children, Delmar and Stella. Of the guest families, Frederick Garrett was left to mourn both children, Opal and Zelda. Joseph Yoder and his wife Belva lost all four of their children, Blanche, Ray, Robert, and Vera. Young Nellie Birky, daughter of Reverend Amos Birky, also passed away. Left with arguably the worst disaster in Washington County’s history, the community grieved for those lost in an outdoor funeral. It was the largest gathering locals could recall, attracting more than 1,000 people who paid their respects to the victims.

Four months later, Leola Inatha Braman Garrett, the mother of Opal and Zelda, died from her injuries on December 13th, bringing the total number of deaths to eleven. According to a Brush Tribune article published on December 26, 1924, Leola had been taken to the Denver hospital for treatment after suffering from a deep scalp wound, a dislocated hip, and many bruises from the tornado on August 10th. During her recovery, she had developed a bone disease which could not be overcome.

There were no additional fatalities or injuries aside from those on the Kuhns farmstead. To this day, this tornado remains the deadliest in Colorado state history.

We discovered a narrative written in the Oregon Mennonite Historical and Genealogical Society by Neil Birky in April 2005. He was a distant cousin to Amos Birky and his father, Reverend Nicholas Birky, served at the Thurman Mennonite Church from 1918-1935. Neil was only two years old when the tornado hit but recalled details passed down to him.

“There was the time, August 10th, 1924, when a tornado struck the home of one of the members, while several other families were there as guests for Sunday dinner. It was a terrible tragedy. Ten members of the group were killed then, one died later of injuries. Some were adults, some were children. A brother and sister were buried in one grave, four members of another family were buried in another. Tornados do strange things. One four-week-old infant, still wrapped in her blanket, was found hanging on a barbed wire fence, practically unharmed with the exception of a few scratches, and, as far as I know, she is still living.” 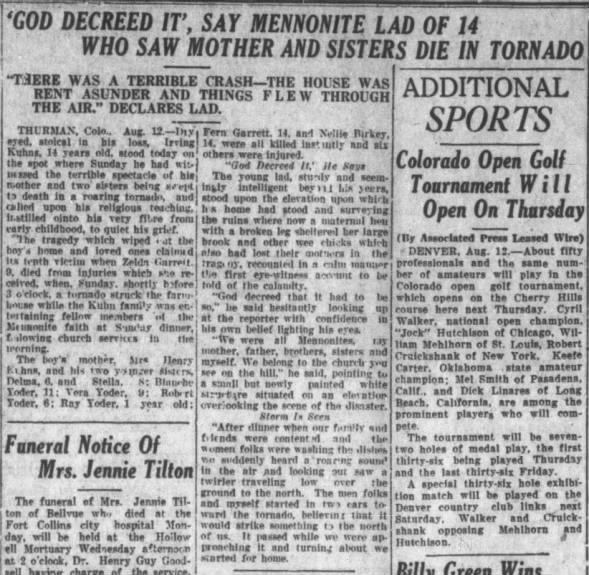 Article from The Brush Tribune, Volume 39, Number 26, December 26, 1924 about the passing of Leola Garrett. Clip from Colorado Historic Newspapers Collection.

Death Notices from The Denver Post on December 15-16, 1924. Clips scanned and sent to us by Stevie Gunter at the Weather History and Geneaology Department at the Denver Public Library.

We gathered information for this event from Significant Tornadoes, 1680-1991 by Thomas Grazulis, NWS Denver/Boulder, Find a Grave, Ancestry.com, and Newspapers.com and found the following differences:

Weather History and Genealogy Department at the Denver Public Library

Thanks so much for finally sharing a story from Colorado!! This was actually south of my town about 35 miles.

Hi Paul! Thank you so much for your comment! I am so glad we finally got a Colorado story done as well and that was a big one! Thanks for all of your support!! – Jen