This summary explores tornadoes from February 1, 1955. They are not a part of the official SPC Database.

Here are details from the February 1955 Climatological Data National Summary about what they denote as a wind and hail event:

“Linesquall began in Arkansas near town of Felton, extending about 75 miles north-south line and moved east-northeastward across northwestern corner of Mississippi and southwestern corner of Tennessee. Hail occurred at scattered places with high winds in counties named, but damage mostly minor, except at Commerce Landing in Tunica County and Lewisburg in DeSoto County. At Commerce Landing path of destruction was 1/2 to 3/4 mile wide and 2 to 3 miles long; in Lewisburg path 100 to 700 feet wide and 3 1/2 miles long. All debris carried eastward and investigation by meteorologists resulted in opinion storm was not a tornado. Deaths were 20 with 141 injured, mostly school children, at Commerce Landing, and 3 deaths with 25 injured at Lewisburg. Near Holly Springs 3 persons injured by high winds. Altogether 99 homes destroyed and 120 badly damaged (most of these were substandard tenant house); 140 other buildings destroyed, and 177 damaged. Moved eastward.“

There are only two tornadoes listed in the SPC database for February 1, 1955:  An F2 in Bedford County, TN, and an F1 in Grundy County, TN.  The only mention of these twisters in the Climatological Data National Summary is in the above blurb.  Not much detail at all.

In the summary above, there is a mention of enhanced damage at Commerce Landing in Tunica County and Lewisburg in DeSoto County, both in Mississippi.

The summary in 1955 states, “all debris carried eastward, and investigation by meteorologists resulted in opinion storm was not a tornado.”

Thomas Grazulis in Significant Tornadoes believes the damage mentioned above was indeed due to two separate tornadoes:  One in Commerce Landing/Robinsonville and one in Olive Branch/Lewisburg.  Articles from newspapers also support tornadoes.  I have researched several newspaper articles and included information and pictures in this summary.  I also found an article where the Weather Bureau is interviewed, saying it is not a tornado.

Note:  It appears other tornadoes occurred this day that are not in the official record.  Grazulis mentions this briefly in his book.  In the February 1955 Climatological Data National Summary, some entries note damage in other areas (East Central Arkansas, Northern Alabama). Still, they state it was caused by damaging winds, not a tornado.  Here is a snapshot of those entries:

Grazulis commented on our tweet about this event in 2019.  He said, “Motivation for not listing it as a tornado was 100% racial.  Funnel was very visible.  Previous comment was based on personal conversations with long time forecasters now deceased.”

Additional evidence that there were tornado events on this day across parts of Arkansas, Mississippi, and Alabama is shown in an article published in the Monthly Weather Review from February 1955 by Jean T. Lee from the Severe Local Storm Center, Weather Bureau Airport Station, Kansas City, MO.

Lee states in the introduction, “This series of severe local storms, accompanied by tornadoes, destructive winds, hail, and heavy rain first struck near Marianna, Ark, at 1400 CST, roared through Commerce Landing, Miss., across northern Mississippi and on to near Huntsville, Ala., where they evidently dissipated around 1830 CST.”

Lee then provides a figure showing the location and times of reported storms in the midst of the Severe Local Storms Center tornado forecast area on February 1, 1955.  See the image below extracted from the article.  The forecast area is outlined. 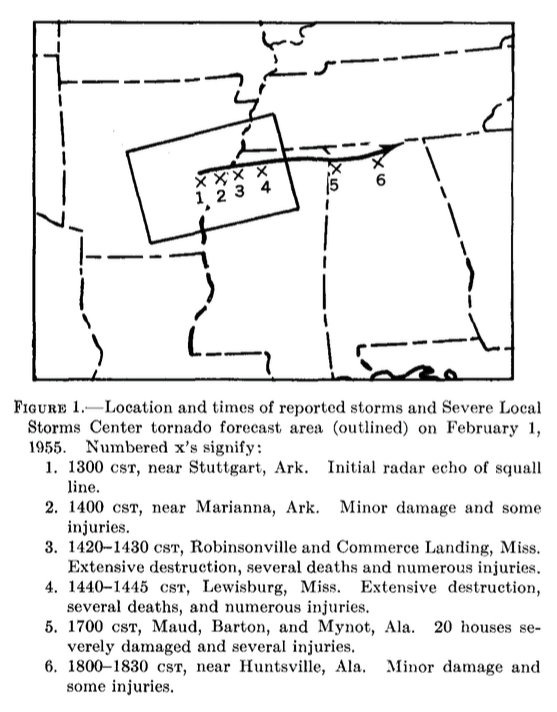 The rest of the paper describes the parameters that were analyzed to forecast tornadoes on this day.  The entire article is archived on the AMS website.  Find it here!

Grazulis notes the tornado cut a path from Commerce Landing, 5 miles West of Robinsonville to Clark.  We based our path map on that information.  There are no official coordinates. Note:  “Clark” is one of several plantation communities that no longer exist.

Fatalities:  Grazulis does not give an exact number of fatalities.  The February 1955 summary states there were 20 deaths, mainly school children, at Commerce Landing.

This is the full summary from Significant Tornadoes.  We have permission to present it in its entirety:

Seen first as a “well defined cone-shaped funnel” over the Mississippi River, this tornado cut a path from Commerce Landing, 5m W of Robinsonville, to Clark.  Most of the deaths were in a plantation school, and several people died in the 45 tenant homes that were destroyed.  About 50 other homes were damaged.  The school was rebuilt and named after the teacher who lost her life trying to get the children into ditches along the road.  Her car was carried 300 yards.  The body of one dead child was carried over a half-mile.  Despite the fact that a funnel was seen, that heavy objects were thrown long distances, and that the tornado was in a forecast box, the event was not officially called a tornado.  A survey team stated that since all debris was thrown in one direction, the event should not be listed as a tornado.  Mississippi losses this day totaled $300,000. 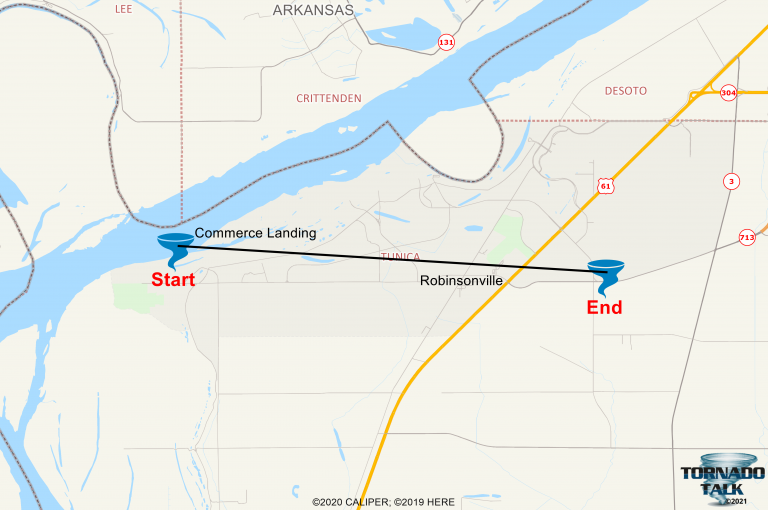 Coordinates based on Significant Tornadoes:

Moved E, passing north of Lewisburg. A plantation school between Olive Branch and Lewisburg was destroyed. The teacher and two students were killed. This tornado is also not on official lists.

We plotted Lewisburg and Olive Branch on the map. Path unknown. 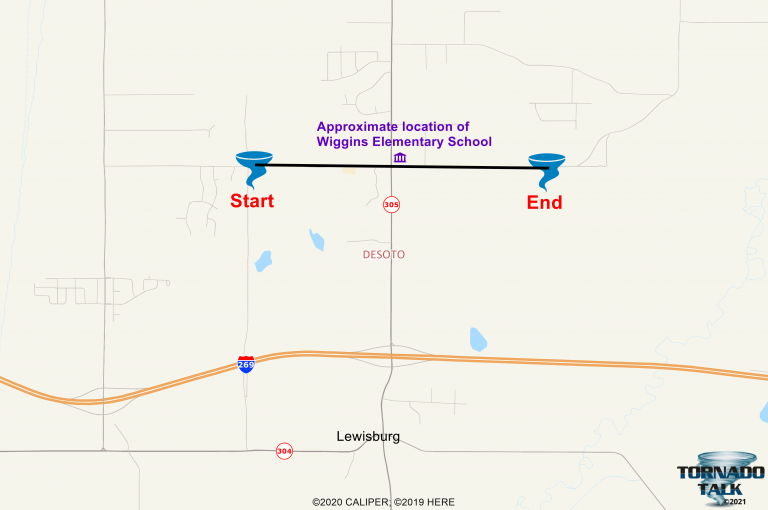 Coordinates Based on Significant Tornadoes

Newspapers.com is a wonderful source for historical narratives. I reviewed several articles, and here is some of the information found.  There were so many devastating stories from these tornadoes but also stories of heroism.  This is just a small sampling of what I found: 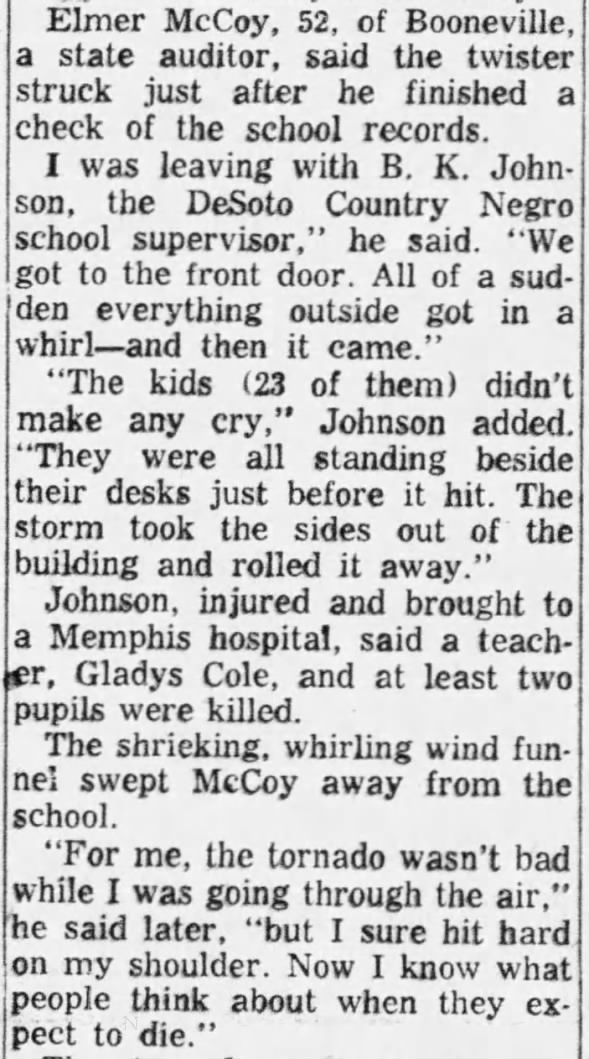 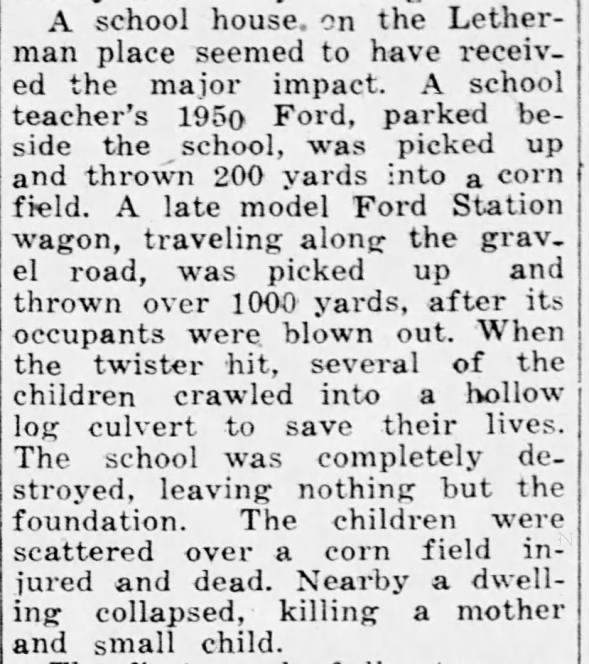 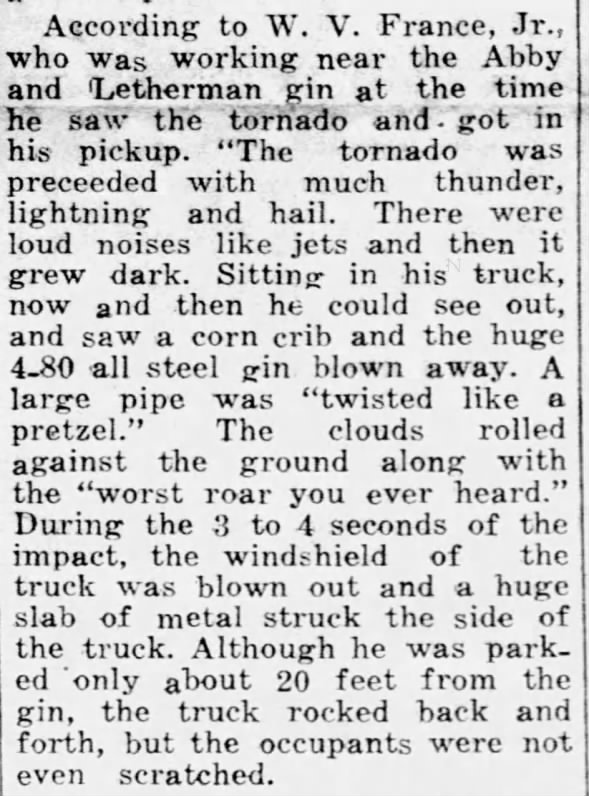 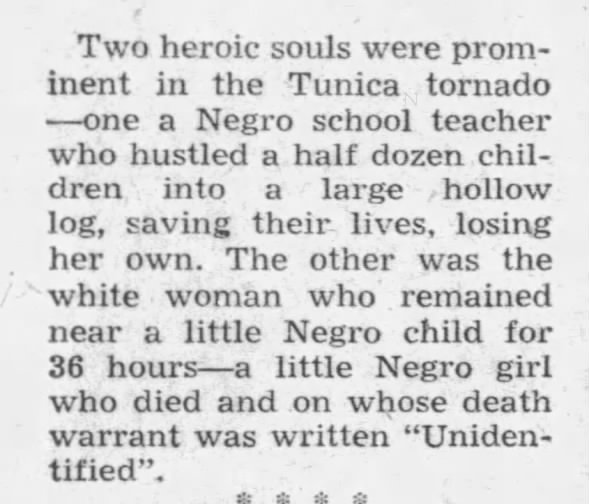 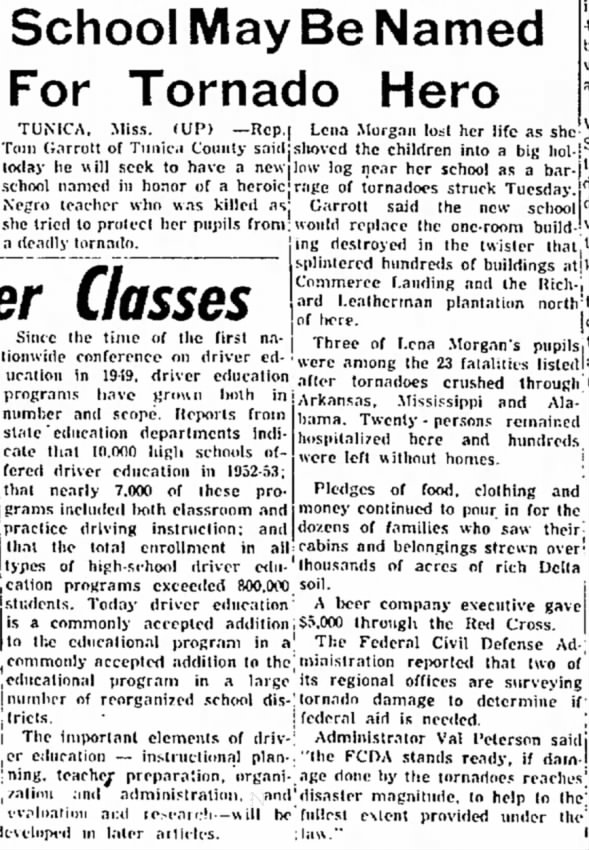 Rep. Tom Garrott, Tunica County, offered a resolution that was unanimously adopted by the house to memorialize the school teacher who helped save the students in Commerce Landing. 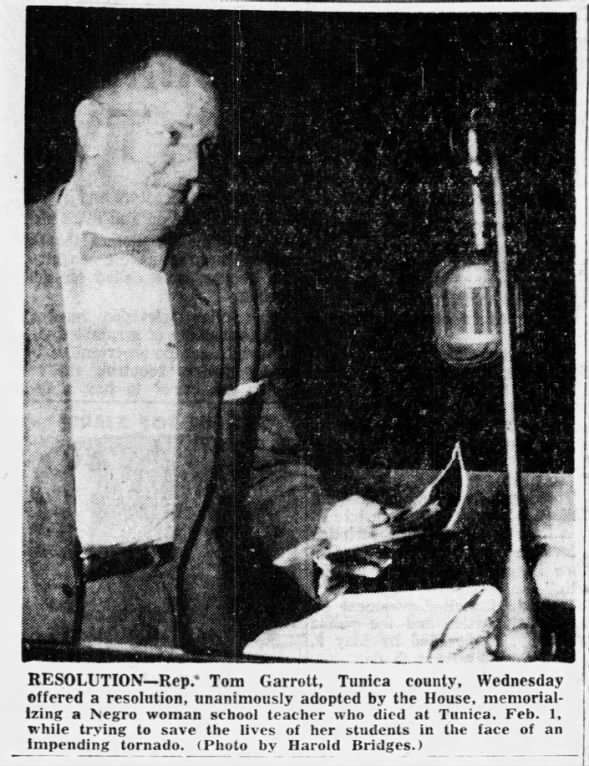 An article was posted in the Greenwood Commonwealth on Feb 8, 1955 quoting a Weather Bureau meteorologist and how this was not tornado damage. Here is the article. 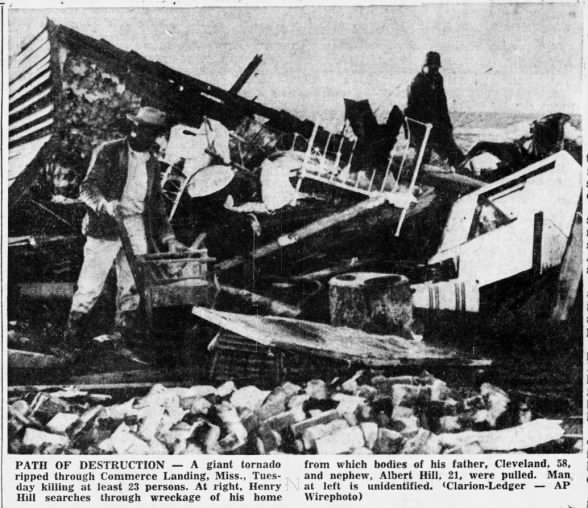 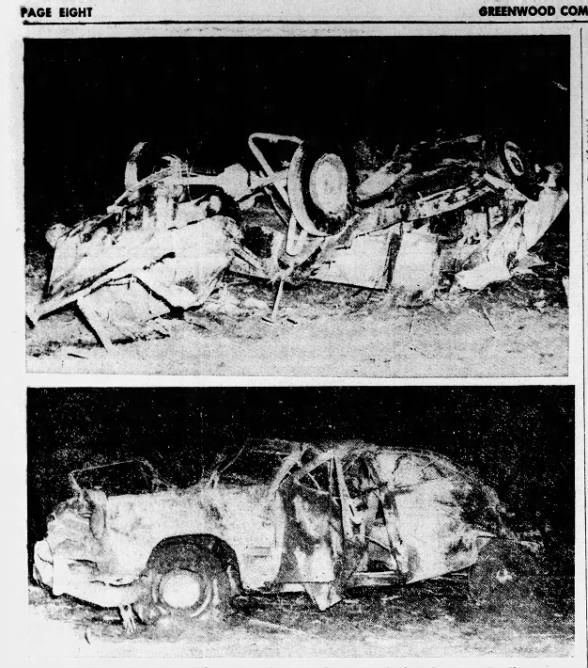 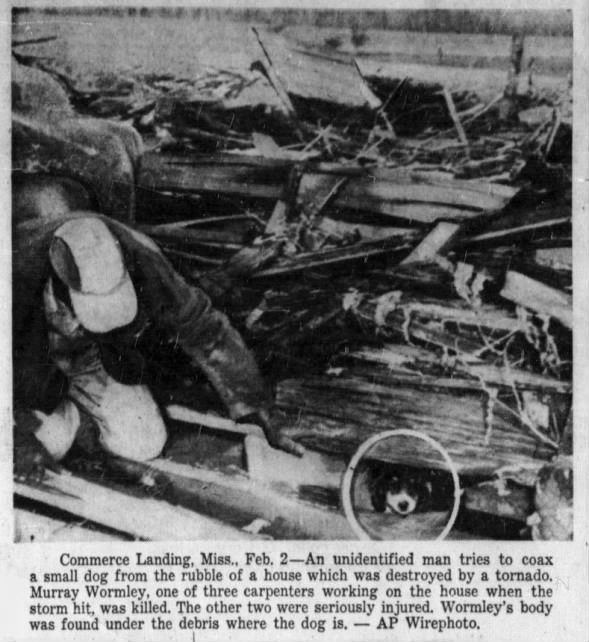 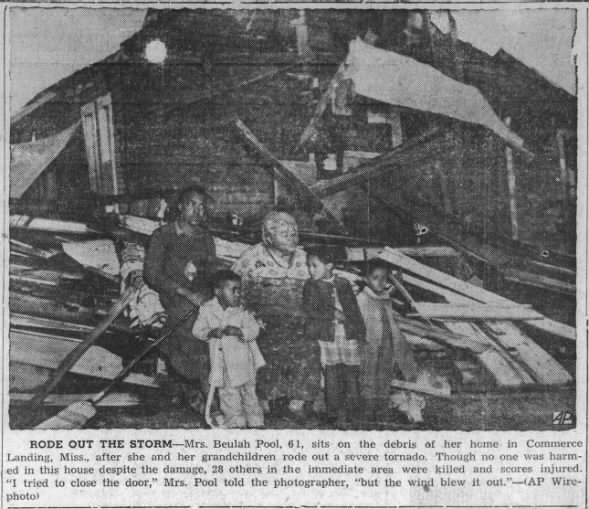 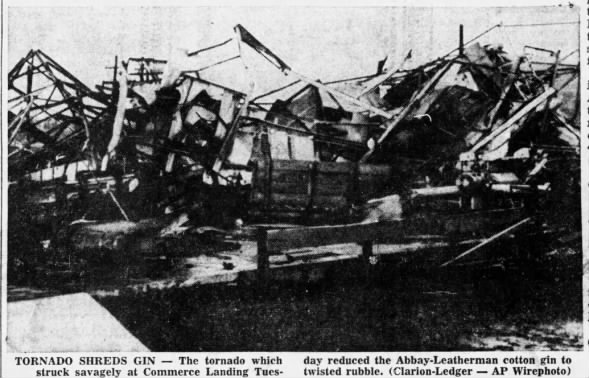 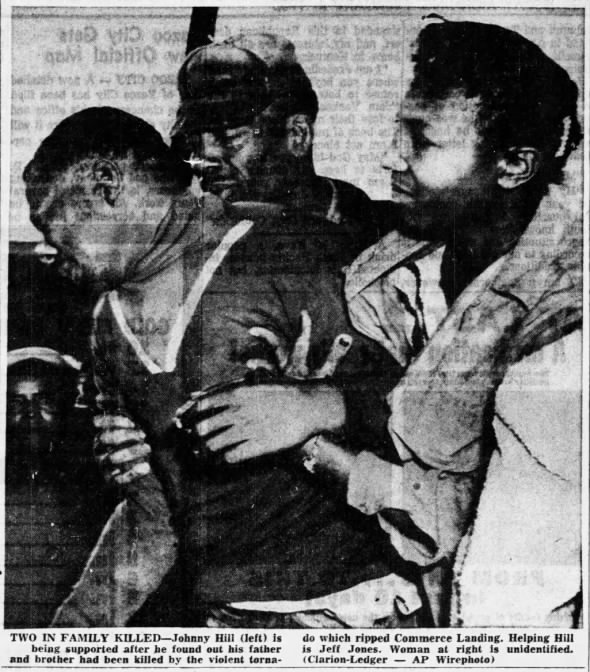 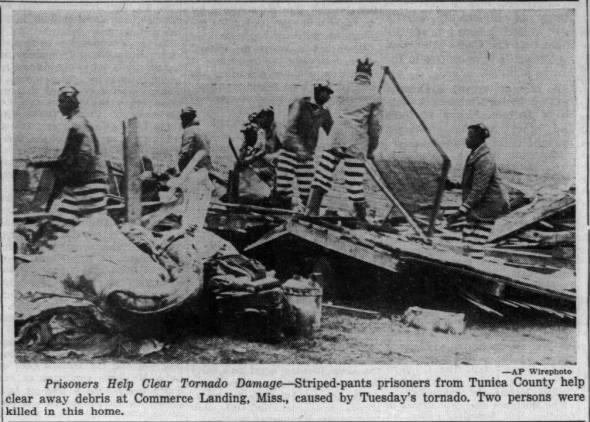 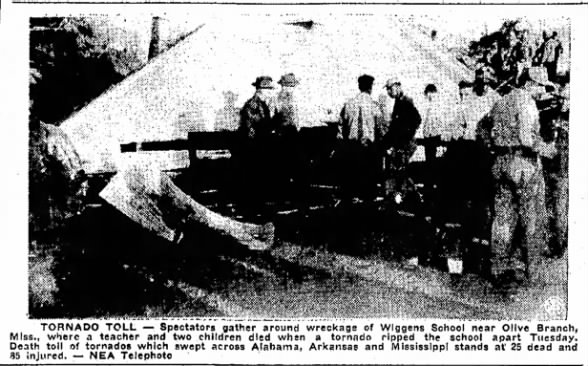