The Weather Bureau’s Monthly Weather Review (MWR) reported 17 tornadoes across Parts of Indiana, Ohio, Pennsylvania, New York, and Maryland this day.  Thomas Grazulis only lists one Ohio tornado and one Indiana Tornado in Significant Tornadoes.  The focus of this Funnel Feature will be on the Pennsylvania Tornadoes. Those are the ones I have done the most research into while working on the Central Pennsylvania Tornado Database.

The tornadoes were spawned between 11 am and Noon and were probably embedded in a Quasi Linear Convective System (QLCS).  In other words, these were twisters embedded within a squall line.  Unfortunately, one of these tornadoes, the Tyrone Tornado, proved to be deadly, killing 5 Hungarian immigrants. This is an interesting event because details about some of these twisters aren’t available as the newspapers only paid attention to the more significant tornadoes.

Due to lack of details, three tornadoes cannot be rated, although the Mercer and Tionesta tornadoes were likely Significant (F2 or stronger).

Coordinates based on MWR

Per the MWR, this tornado struck at 11 am and moved from Neshannock to Mercer.  It was described as “Very Destructive,” but since no real damage description was given and cannot be found in the newspapers, a rating can’t be applied.

Coordinates based on MWR:

Per the MWR, this tornado also hit at 1100 AM and was described as “very destructive” and “the worst storm since 1851”.  As with the Mercer County tornado, since no real damage description was given and cannot be found in the newspapers, a rating can’t be applied. The path plotted here is based on Finley’s Pennsylvania Tornadoes 1811-1888.

Per the MWR, the tornado occurred around 11:00, although newspapers say it occurred between 10:30 am, and 11:00 am. It was “Very destructive.”  Additional Details from newspapers.

The path plotted here is just a best guess, and it may have been longer.

Per the MWR, the tornado was “Very Destructive.”

Per the MWR: One large distillery, one large factory, and several houses were destroyed.  It was noted as a “narrow funnel.”

John Finley listed this tornado on his list of Pennsylvania tornadoes 1811-1888, and the path plotted here was based on his map.  Finley was an early tornado researcher for the Weather Bureau.  The tornado was described as an “inverted cone.”  No other details are available. 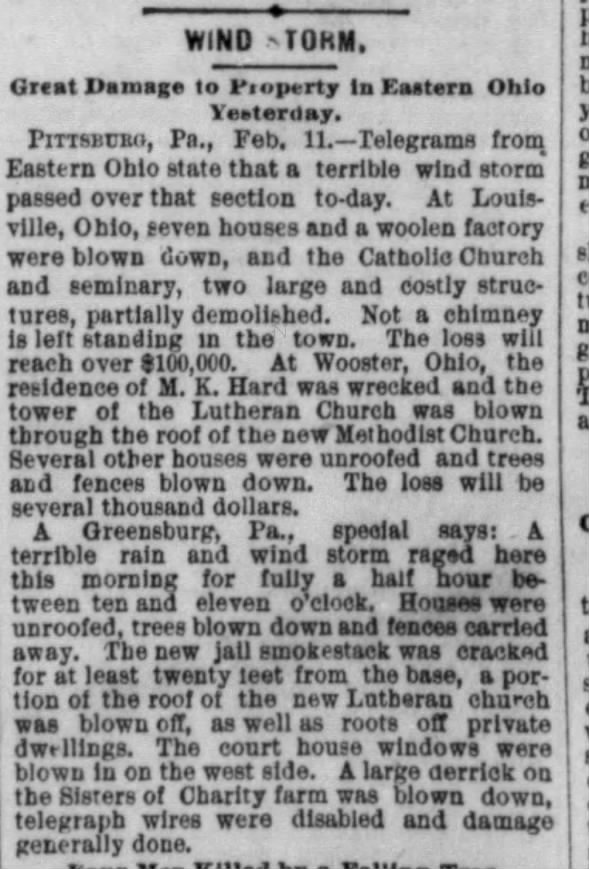