From the Storm Data Narrative:  23 homes were damaged or destroyed.  Other farm buildings and farm machinery were destroyed from near Colome northward to near Hamill.

Per Thomas Grazulis in Significant Tornadoes: 7 farms were destroyed, 3 were swept completely away east of Colome. 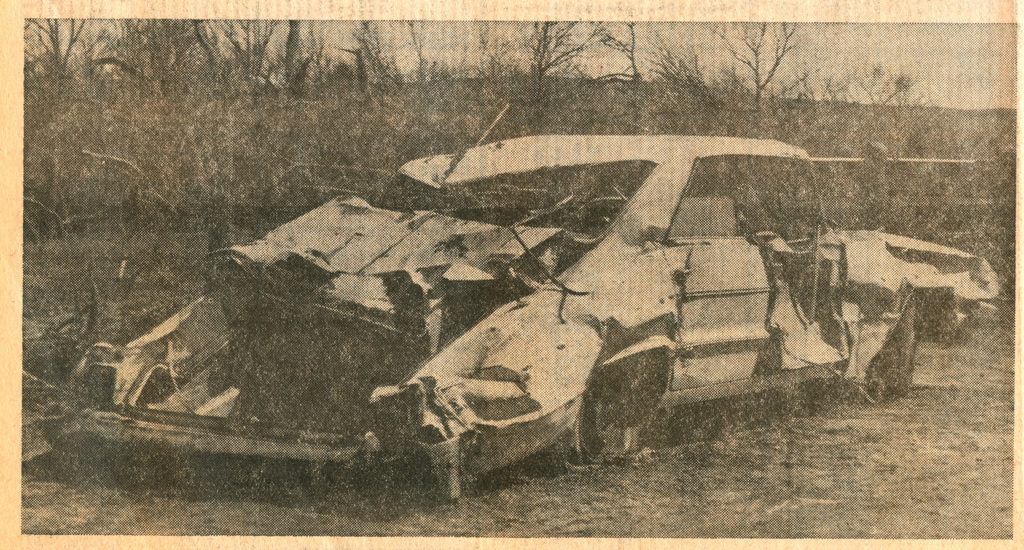 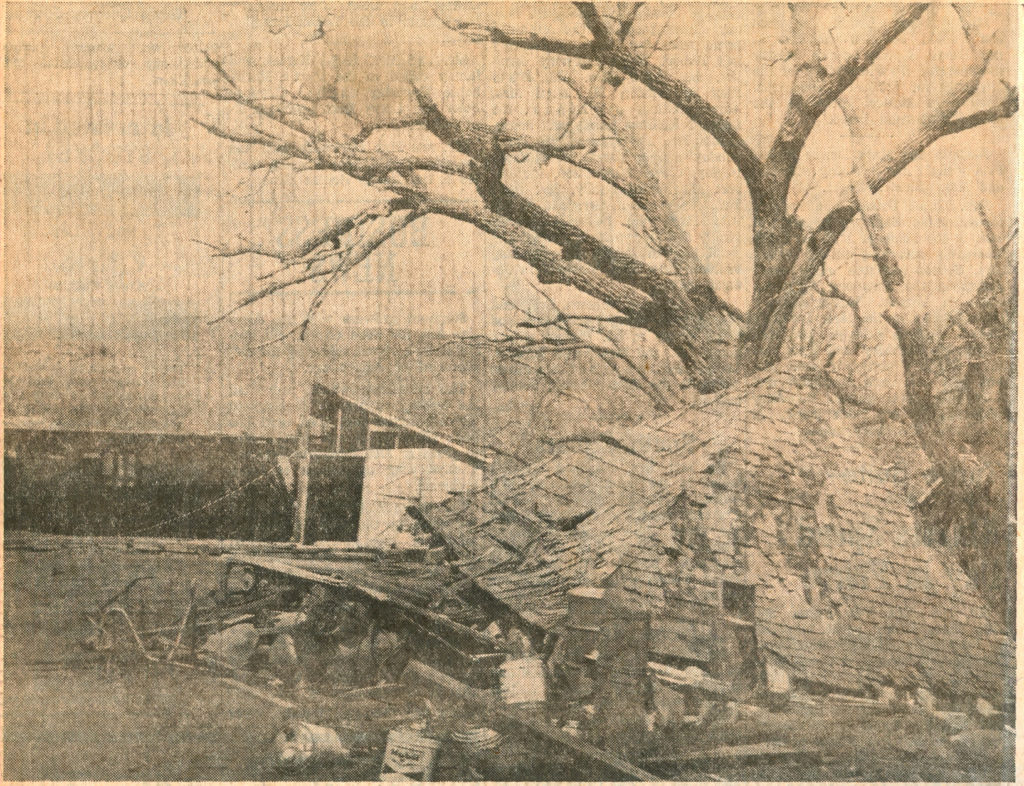 Article About the Event from the Winner Advocate

The thirty minutes of devastation sent one man to the hospital and completely destroyed seven farm homes while ripping to shreds outbuildings on farms from the Nebraska boarder east of Wewela on north of Highway 18 east of Colome.

The only injury that required hospitalization from the storm was to William Musilek who lives about ten miles south of Colome. He was taken to the Gregory Hospital with several broken ribs and a punctured lung and is currently reported in satisfactory condition.

The injured man was returning home in his car, when the tornado struck, tossing his car on top of highline wires and flinging it near his house. Musilek was able to crawl from the auto to the house where his family had taken refuge in the basement of the home.

While the fury of the storm spent itself in eastern Tripp County, Winner was being blasted by hail and high winds which caused thousands of dollars of damage to windows, roofs, store signs and hundreds of autos.

The hail, which reportedly was the size of golf balls, buried the western half of Winner in over two inches of ice and slush while the eastern half of the city received lesser hail amounts.

Winner’s official weather observer, Mrs. Rollin Key, stated that three inches of rain fell throughout Saturday with 1.60 inches falling between 6 and 7 p.m. An inch and onw-quarter was reported prior to the 6 p.m. drenching and an additional .15 fell after 7 p.m.

While Winner was receiving three inches, the tornado area south of Colome received only twenty hundredths of an inch. A report from the Millboro area indicated that about three and one half inches fell in about 45 minutes between 4:30 and 5:15 p.m. A small amount of hail was reported in that area with the heavy rains causing some roads to be washed out.

A report from the Hamill area stated that a twister was sighted in the area of the John Fiala and the Jack Lynass farms about eleven miles east and four miles north of Winner. Damage at the Lynass farm included a chicken house which was blown over. There was also a report of damaged feed bunks at the Fiala farm and some fences and gates were ripped up at the Joe Orel farm in that area.

Some hail was reported in the Hamill area where nearly three and one half inches of rain were reported. Some places west of Hamill received over four inches from Saturday’s drenching.

A report from the Witten area indicated that about one and one half inches of rain fell between 4:30 and 5:30 p.m. There was no report of hail or high winds in the Witten vicinity.

Insurance agents throughout the Winner area have been deluged with claims from storm damage. The claims, which have been keeping local agents working through the evening hours, range from total losses on buildings and livestock in the tornado area to reports of lesser damage in the Winner vicinity.

The tremendous wind and force which drove the golf ball sized hail in Winner caused damage ranging from minor dents to estimates of over $200 in smashed paint jobs.

Tripp County Sheriff James E. Storms, who worked through Saturday night covering the storm damage in the Colome area along with deputy Louis Hespe and highway patrolman LaVerne Nye, reported that the 730th Medical Clearing Company was called into action on Sunday.

The total damage suffered to farmers south of Colome appeared to be open for possible looting, but National Guardsmen were called in from noon Sunday until late Sunday evening to prevent any possible thievery. According to Sheriff Storms, there were no actual reports of looting at any of the damaged location.

The Winner, Bonesteel and Gregory areas were without power starting at 5:25 p.m. on Saturday evening as a result of the storm.

According to Rosebud Electric Cooperative officials, four large structures on the Bureau 115,000 volt transmission line were snapped off by the high winds. Power was restored to Gregory and Bonesteel fifteen minutes later, but Winner was forced to use their emergency power facilities for a time until power was restored after 6 p.m.

Officials of the Citizen’s Bank of Colome have announced that a fund for the financial assistance of victims of the tornado, has been started at their institution.

They announced that funds have already been arriving for the tornado salvage assistance and added that the entire fund will be distributed to victims of the storm.

Although reports of additional tornado and wind damage are still coming in, a list of victims and damages has been complied by Sheriff Storms. Included in the list of victims are twenty-seven areas both in Tripp County and Nebraska which were hit by the twistrs.

Damage at the Tom Holden farm south of Winner included a total loss of all out buildings and severe damage to the house. Mr. and Mrs. Holden and their two grandchildren were in the home at the time of the storm while a son, Merle, was tossed about in a car as he drove into the yard when the storm hit.

The largest of the two twisters apparently touched down near the John Von Heeder farm in Nebraska where the storm leveled the entire farmstead, including the hosue. Mrs. Von Heeder and a baby were in the house at the time but were not injured.

As the storm moved into Tripp County in destroyed a sheep barn and killed one calf on the Erv Croston farm.

The trail of destruction continued through the Otto Hauf farmstead completely demolishing the farm including the Hauf house and a vacant set of buildings just across the road. Mr. and Mrs. Hauf had driven into Winner and luckily were not at home when the twister hit.

Just one mile north of the Hauf farm, the tornado leveled the farm of Kenneth Kenzy, destroying the Kenzy home and surrounding outbuildings. Mr. Kenzy was ablt to escape the fury of the storm when his father-in-law saw the twister approaching and was able to drive awa with the Kenzy family before it hit. Mrs. Kenzy was not at home at the time.

The farm buildings on the Howard Sorber farm, two miles north of the Kenzy farm, were completely leveled while Mrs. Sorber and her three grandchildren remained in one of the two houses which withstood the tornadic blast.

The damaging twister continued up eastern Tripp County leveling a grainery and corn crib on the Dennis DeMers farm.

Continuing north the tornado completely destroyed the outbuildings on the William Musilek farm injuring Mr. Musilek who was driving home in his auto at the time. Other members of the Musilek family sought protection from the storm in the basement of the hosue which was severely damaged and is considered a total loss by authorities.

The farm of James and Phillip Musilek, located three miles east of the William Musilek farm, received severe damage when outbuildings and fences were torn down. A trailer house on this farm was also twisted from its moorings.

Additional damage was reported to the Donald Kaiser farm near the Musilek place where several outbuildings were lost and a vacant farmstead was completely demolished. The outbuildings of the Phil Shadeed farm neat the Kaiser place were also demolished.

A pole barn at the Charles Hrabanek farm south and east of the Calvary Chapel was picked up by the twister and deposited in a heap near the Hrabanek house.

The entire set of outbuildings at the Harley Fetzer farm were completely wiped out by the storm as Mr. Fetzer was thrown from his auto by the violence of the twister. He was not injured in the incident. Local authorities stated that the Fetzer house was also severely damaged.

Other buildings which were demolished in the storm’s fury included all the outbuildings on the farmsteads of Ray Neyens, Bill Donovan, Leonard Vobr and Vern Bertram.

In a final gust of fury before leaving the scence of violence, the twister completely demolished all the outbuildings on the Joe Stritecky farm north east of Colome. The Stritecky family took refuge in a cave while the storm was in progress. The Stritecky home was also severely damaged by the storm.

Local authorities have not yet placed an estimated on the total amount of damage caused by this tornado may have been the same one seen in the Hamill area which caused some minor damage.

We gathered information for this event from the SPC & NCDC Databases, the May 1965 Storm Data Publication and Thomas Grazulis in Significant Tornadoes and found the following differences:

Many Thanks to the Winner Advocate for emailing me copies of damage photos and an article from their paper.