“Despite the swiftness of the blow, the frightful loss of life, the staggering destruction of property, the people of that city have lifted their heads from grief to face the future in an unconquerable determination to rebuild a better, greater, and fairer city.  Such an unquenchable spirit makes them neighbors to the rest of the world.”

Those words were penned by William Clifford Morse, Ph.D, Mississippi State Geologist in his bulletin about the devastating Tupelo, MS tornado of April 5, 1936.  This significant tornado was part of a larger two-day outbreak.  It occurred on Palm Sunday during the evening.

Per the Monthly Weather Review of May 1936, there were 17 tornadoes across 6 states April 5-6.  In a separate summary, we analyze another event from this outbreak:  The Gainesville, GA Tornadoes.

Information for the Tupelo event were gathered from the following resources:

Hit at 2055 local time.  There were 700 injuries and 216 fatalities.  The path length was 15 miles through parts of Lee & Itawamba Counties. He lists this was more than likely part of a tornado family.  The width was estimated at 1000 yards.  Rating given:  F5.

Per The Storm Prediction Center, the Tupelo Tornado is the 4th deadliest in US History.  There is a question on the number of people that died during this event.  The official record lists 216 fatalities.  Per Thomas Grazulis, when this death toll was set, “there were still over 100 people in hospitals in three states.”   William Clifford Morse, Mississippi State Geologist at the time listed a death toll of 233 in his Bulletin about this event.  He noted that hundreds were still injured.  Per Grazulis, “Since only the names of the white injured were published in newspapers, it is not possible to follow up on the fate of the black injured.  This racial aspect of tornado documentation was common until the late-1940’s, and occasionally present, in some form, until the mid-1950’s.

Here are the details from Significant Tornadoes on the path and damage from the Tupelo tornado:

Bulletin 31 written by Mississippi State Geologist William Clifford Morse, Ph. D. in 1936 reads like an in depth damage survey.  His goal in writing it is stated in his cover letter to Dr. A. B. Butts, Chancellor of Mississippi University.  “I am transmitting herewith a short article on certain phases of the Tupel Tornado, in the hope that it will lead to the building of better and safer cities.”
The Bulletin contains several damage photos, some of which are included in this summary.  It also contains a breakdown of the structures damaged by the tornado.  Dr. Morse describes how different buildings were damaged in different ways based on how they were built.  For example, in describing the partial collapse of the Tupelo High School (see image below), Morse states, “the main cause was inadequate cross partition braces, for the part that failed was the west wall, which was common to the auditorium and the gymnasium.  In  falling, this wall crushed the seats of the auditorium to the floor and covered the free floor of the gymnasium.  The opposite wall, also common to each of these rooms, was forced outward.  The remainder of the building, the front and the east wing, stood more or less completely intact.”
Thomas Grazulis notes that many well-constructed homes were destroyed on the west side of Tupelo.  One area hit hard was the Willis Heights neighborhood.  Per an article in the Clarion-Ledger from April 7, 1936, this area was “populated by a number the prominent citizens of Tupelo.” Tue, Apr 7, 1936 – Page 10 · Clarion-Ledger (Jackson, Mississippi) · Newspapers.com
The Gum Pond area (now known as Gumtree Park) was one of the hardest hit areas.  Gathering the details on what exactly happened in this area has been difficult.  But based on newspaper articles at the time and some current reviews, this was an African-American area.  There were many homes along the edge of the lake and most were swept into the water.  Here are a couple of newspaper clips from April 1936.  Keep me in mind, the language used here was used during that era. 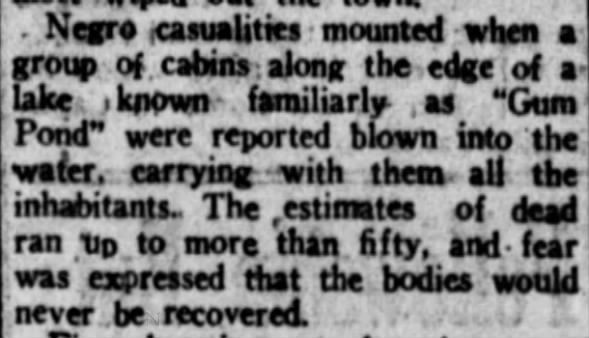 Sat, Apr 11, 1936 – Page 1 · The New York Age (New York, New York) · Newspapers.com
It is unknown how many actually died in Gum Pond.  This adds to the uncertainty to the exact death toll from the Tupelo Tornado.
Thomas Grazulis mentioned in his synopsis of this event the death of 13 members of one family.  This tragedy occurred to the members of the J.P. Burrough family.  Per the Enterprise-Journal from April 6, 1936, Mr. Burrough was a textile worker.  He and his family lived west of Tupelo on a small farm.  He and and his wife Jennie, along with their 11 children (the oldest was 20, the youngest 2) were killed.

Wed, Apr 8, 1936 – Page 1 · Clarion-Ledger (Jackson, Mississippi) · Newspapers.com
One very young survivor of this horrific tornado was Elvis Presley along with his parents Gladys and Vernon.  Elvis was only 15 months old. 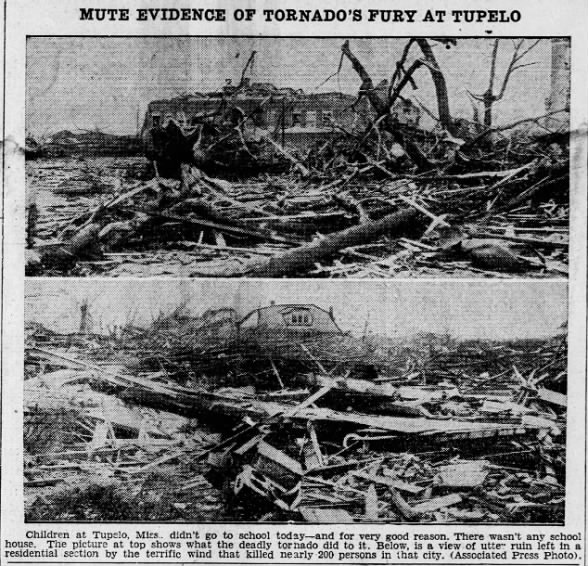 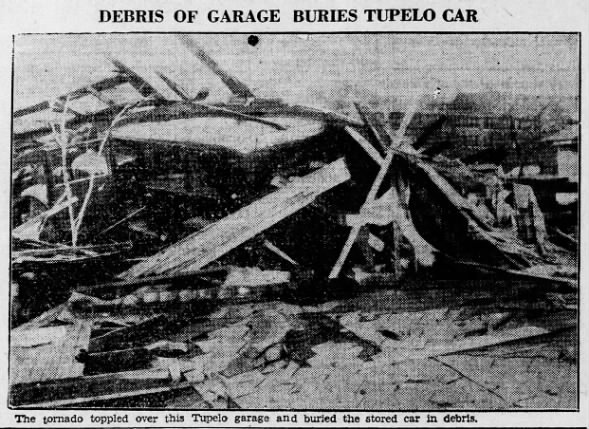 The List of the Strongest Tornadoes Ever Recorded (Pre-1970): Part II – extremeplanet.me