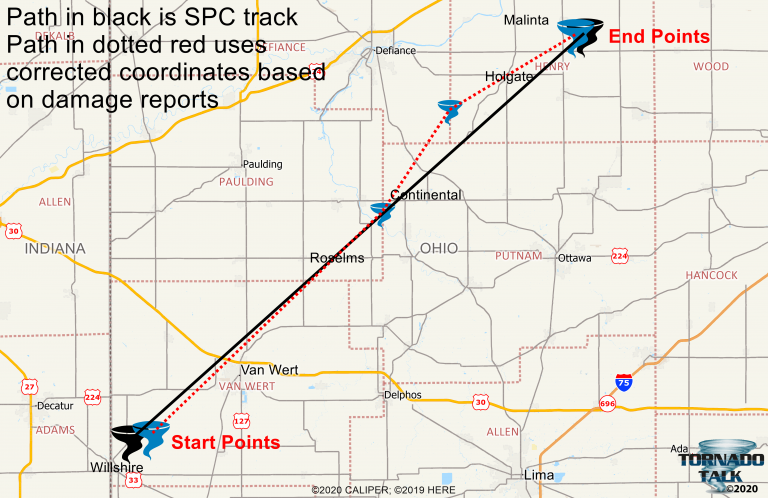 Corrected Coordinates based on text in NCDC narratives:

The Veterans Day Weekend Tornado Outbreak began on November 9, 2002. We have a summary on one of the 10 tornadoes that occurred that day: Cedar Grove-Terry, TN F2 Tornado – November 9, 2002. The outbreak really ramped up on November 10 with 60+ tornadoes occurring. Per the NOAA Assessment of the event, “The Veterans Day weekend tornado outbreak covered a very large area of the eastern United States and can be described as four distinct areas or episodes of tornadic activity. The fatalities associated with the event occurred over a 25-hour period.”

The first “episode” occurred on November 9. The weather set-up on November 10 allowed the other three areas of tornadic activity to develop simultaneously. Here is a radar composite extracted from the NOAA Assessment from mid-afternoon of Sunday, November 10, 2002.

The NOAA Assessment states that just before 6pm CST, “there were 15 different supercell thunderstorms in progress at the same time, each one containing a well-defined mesocyclone circulation capable of producing a tornado.”

The map below shows tracks of supercell thunderstorms and preliminary reports of F2 or stronger tornadoes from Sunday afternoon, November 10 through early Monday morning, November 11.

This summary will focus in on the strongest tornado to occur in the Veterans Day Weekend Outbreak. It was the first killer tornado of November 10. This tornado developed in Van Wert County, OH and tracked 52.8 miles. It produced F4 damage in Van Wert County and F3 damage in Paulding and Putnam Counties. It then weakened to an F0 as it traveled through parts of Defiance and Henry Counties.

Per the Storm Data Entry, the tornado developed 4 miles NE of Willshire in Van Wert County. The twister strengthened quickly to an F4, five miles SW of the city of Van Wert near Zook Road. 75-year-old Alfred Germann was killed when his home collapsed. (News Herald, Port Clinton, OH – November 11, 2002).

The tornado moved into the city of Van Wert as an F4. It hit the Twin Cinemas and the Vision Industrial Park. The tornado was about 1/2 mile wide. From Storm Data, “60 persons watching a movie in the cinema, mostly children, took shelter before the tornado hit, with only minor injuries. Vehicles from the parking lot were thrown into the seats where the children had been sitting.”

The photos shown below are all of the Twin Cinemas, via the NWS Summary.

Scott Shaffer, one of the managers of the cinemas, is credited for helping to save lives this day. 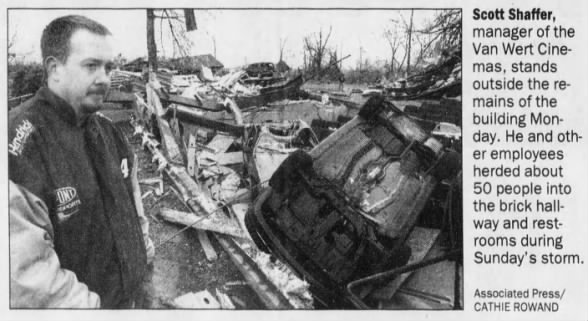 Sadly, Nicholas Mollenkopf, 18 was driving by the cinema when the tornado hit. He was thrown from his vehicle and killed. (Info via Storm Data and News Herald, Port Clinton, OH – November 11, 2002).

Per Storm Data, 164 homes were damaged in Van Wert County and 43 totally destroyed. Five businesses in Vision Park were destroyed.

The tornado moved from Van Wert into Paulding County. Ground and aerial surveys found F3 damage along the entire nine mile path in Paulding County. Per Storm Data, only one structure remained standing in the town of Roselms. This is an unincorporated community in SW Washington Township. In an online article from the Toledo Blade from November 11, 2002, it states, “Sweeping down State Rt. 114, the storm flattened the Washington Township hall and Roselms Church in Roselms.” I found this clip:

The tornado maintained F3 strength as it moved out of Paulding into Putnam County. Near Continental, a mobile home was hit killing husband and wife, Denver and Cretie Branham. (The Cincinnati Enquirer, November 12, 2002).

The tornado finished its track as an F0 in Defiance and Henry Counties. There was damage to a few homes, trees and outbuildings. The tornado had a skipping path through these counties. 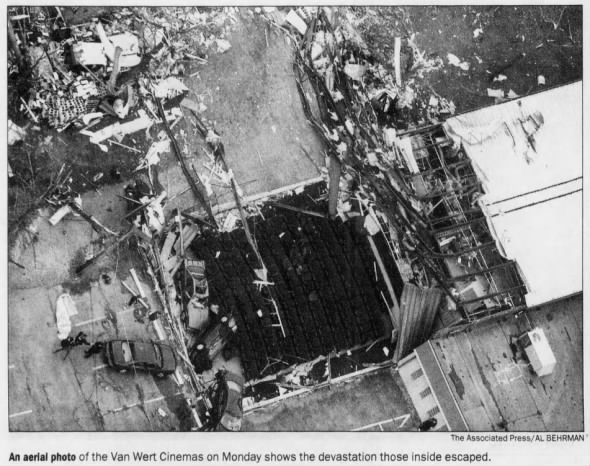 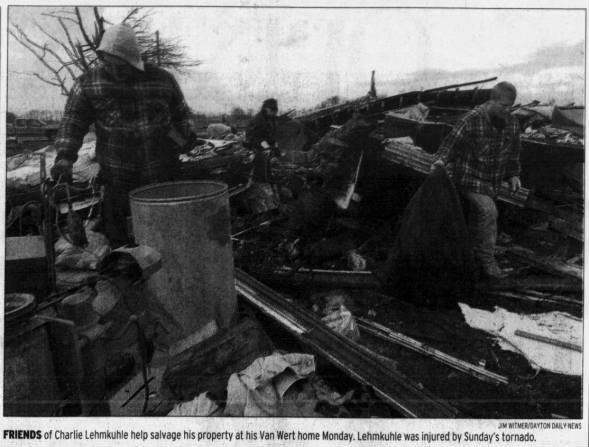 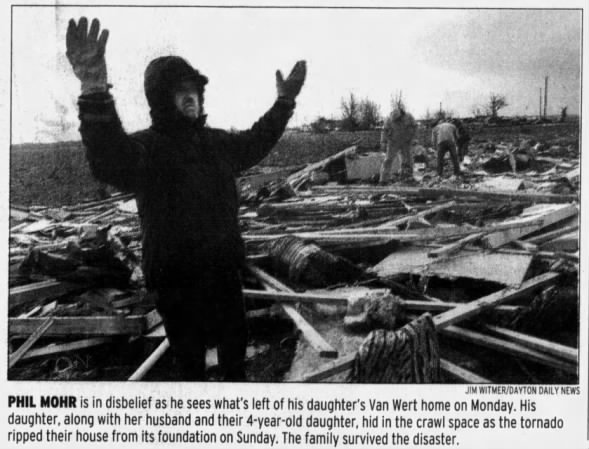 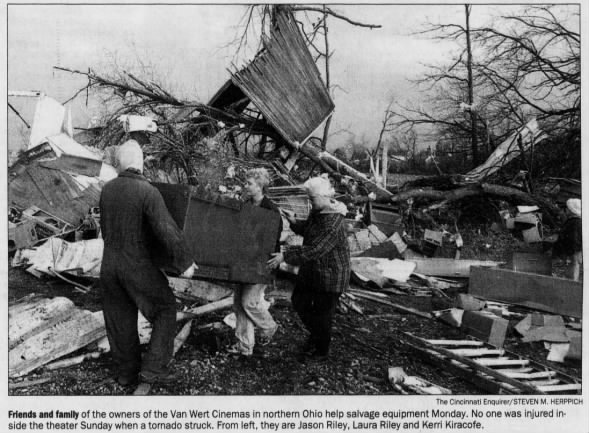 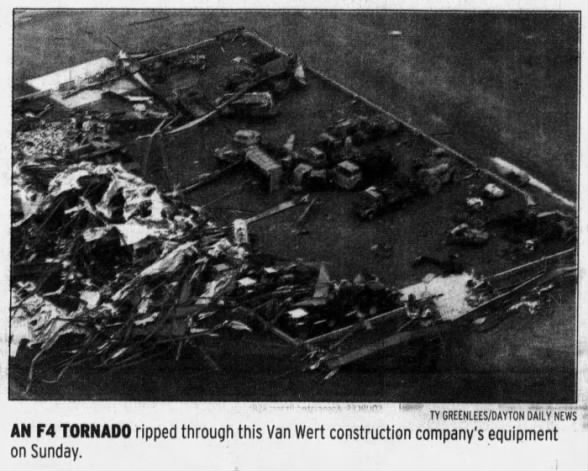 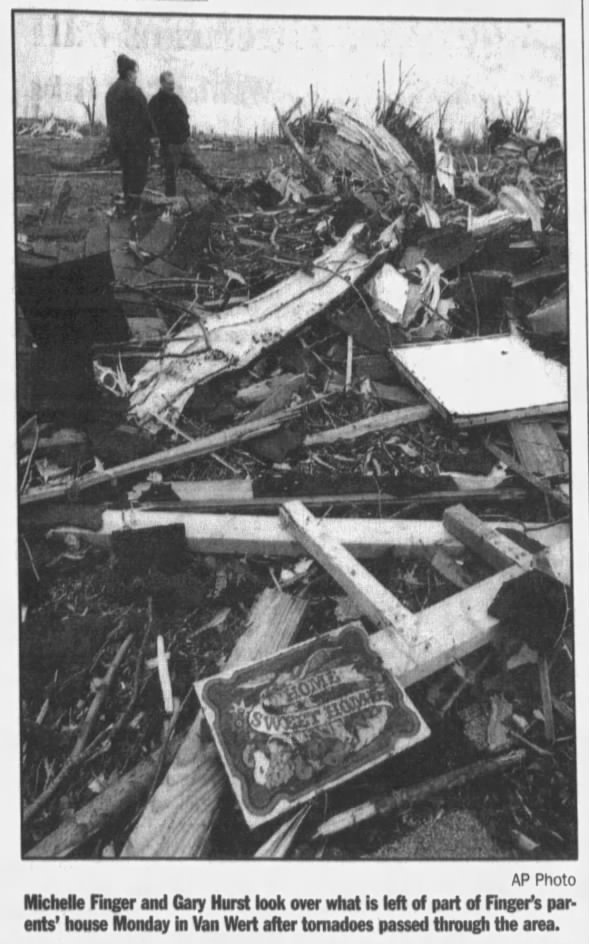 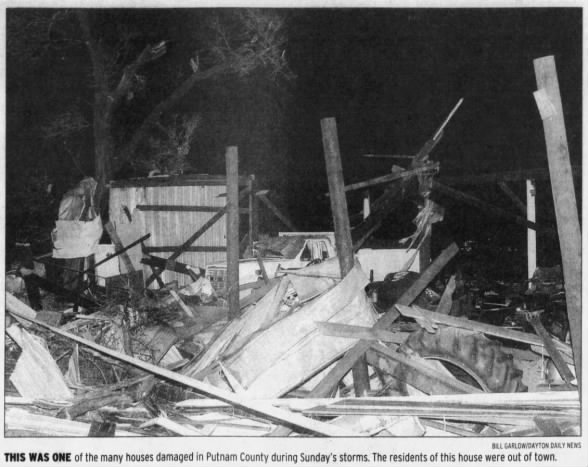 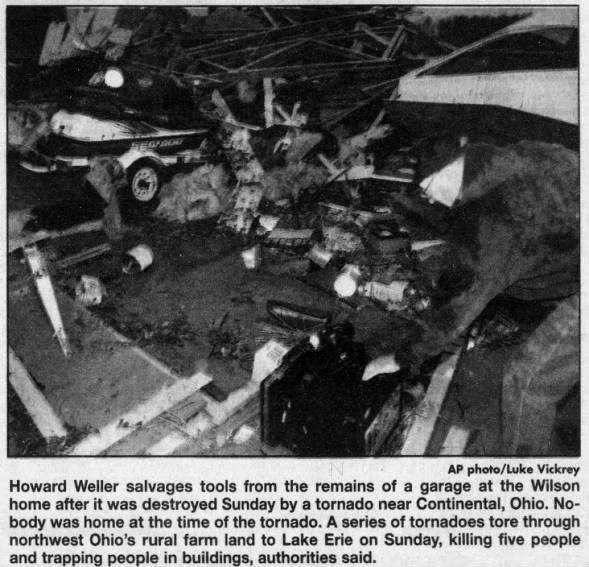 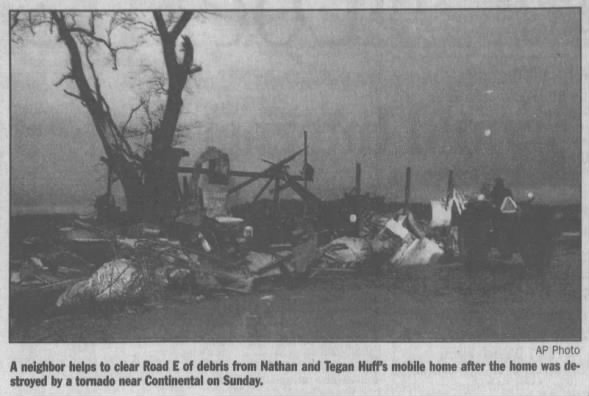 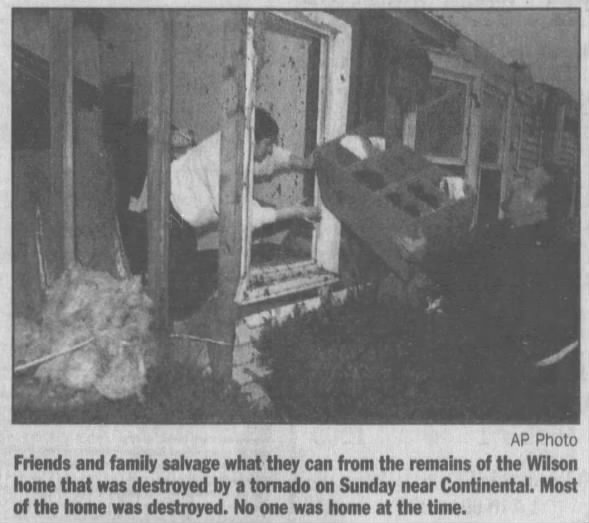