Corrected Coordinates based on Aerial and Satellite Imagery:

Just before midnight on April 27, 2011, an intense EF3 tornado moved through central Georgia. The small community of Vaughn, GA was destroyed. Sadly two people were killed and at least 12 others were injured.

It developed north of Alps Road, 2.17 miles SSW of Alvaton. It was concurrent with an EF2 tornado moving through southern Meriwether County at the same time.

In Meriwether County, the tornado had a path length of seven miles, and it was up to one-half mile in width. It downed hundreds of trees and destroyed outbuildings. The maximum rating in Meriwether County was EF2.

The tornado crossed into Spalding County, approximately three miles south of Digbey. Along Hollonville Road, a large home was completely unroofed and torn apart, and an adjacent metal garage was swept clean off of its foundation.

Just southwest of the intersection of Fairview Road and Line Creek Road, 55-year-old Charlie Green and 22-year-old Jamie White huddled in the bathroom of Charlie’s double-wide mobile home. Jamie was Charlie’s in-home caregiver, and she worked with him during the night. Jamie’s mom, Kimberly Hilton, relayed her daughter’s story to the Daily Citizen News. Jamie called her boyfriend as the tornado approached and told him, “I think a tornado’s coming. We’re so scared. We’re in the bathroom.” Her boyfriend heard a loud noise, and the phone went dead. The mobile home was vaulted 100 yards into a treeline and disintegrated. Tragically, Jamie and Charlie were killed instantly.

Across the street from Charlie’s trailer, a large home was heavily damaged as its roof, and second-story walls were torn off. A second house was demolished, with only interior rooms left standing. Several more homes were destroyed as the funnel passed between Highway 16 and West Mcintosh Road. In this area, it reached a peak width of 1580 yards (0.90 miles). About ¾ of a mile northeast of Mallory Lake, a large two-story, colonial-style house was leveled and partially blown off its foundation.

The large twister then barrelled through the small, unincorporated community of Vaughn shortly after midnight. Vaughn is located at the intersection of Bendview Road and W McIntosh Road, about 8 miles west-northwest of Griffin. Aerial images of the aftermath show a clear multiple-vortex damage pattern in town.

Mike Porter was in his bedroom when all of a sudden, his window fan flew across the room. He ran into his father Paul’s room and yelled “tornado”! Suddenly, the house collapsed around them. Paul suffered a minor finger injury. Mike survived without injury, and he slept outside that night in a sleeping bag.

John English and his wife Brenda lived across the street from the Porters. John watched out the back door as debris spiraled through his yard while Brenda screamed that the tornado would kill them. John and Brenda’s century-year-old home was torn apart. The English’s emerged without injury and slept in the back of their van that night.

Chrys­ostom Sullivan’s house on Bendview Road was destroyed, and he was crushed under a fallen wall. Several of his ribs were shattered, and a metal shard was impaled through his leg. He pulled himself up onto what was left of his couch and laid there as the rain poured down on him for half an hour. When the rain stopped, he sat there in shock for another hour and a half, bleeding and vomiting onto the floor. It took paramedics the entirety of the night to get to Chrysostom due to the number of downed trees blocking the way.

The Barreto’s home, nearby, was also destroyed. Susan and her daughter Shalena rushed to a closet, but they did not make it in time. Shalena was “sucked” under the bed; it broke on top of her and pinned her to the ground. A cinderblock wall fell onto Susan, knocking out one of her teeth. Sadly, one of their dogs was killed.

The 107-year-old Vaughn United Methodist Church was just remodeled and reopened to the public in January 2011. The tornado removed the rear wall and roof, and it smashed out all of the newly installed stained glass windows. Every tree that surrounded the church was snapped or uprooted. Interestingly, angel figurines that were “light as paper” were left untouched on the church’s piano.

In less than a minute, Vaughn was left in shambles. A total of one dozen homes were destroyed, and a few more were damaged. There was severe tree devastation, and survivors reported that the air smelled like Pinesol after the tornado ripped through. Overall, at least six residents were injured in this small community, but thankfully no one was killed. 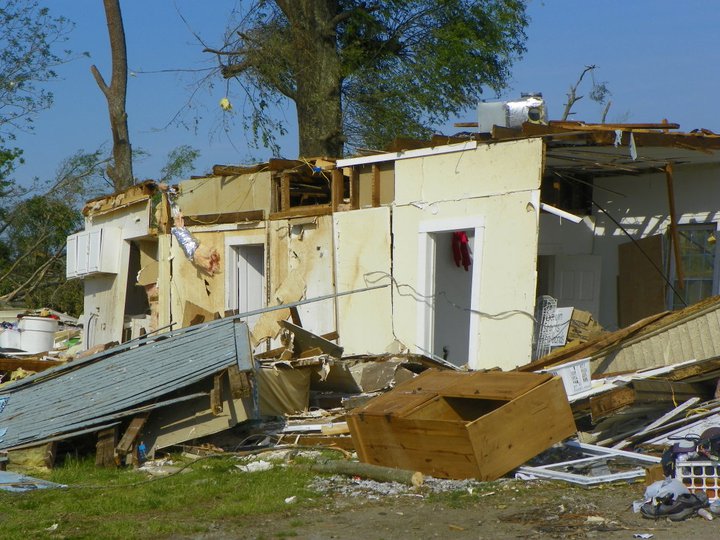 The tornado continued moving toward the northeast, passing north of Rio and skirting past the western side of Heads Creek Reservoir. Several homes were damaged or destroyed, and hundreds of trees were snapped and uprooted in this area. It crossed Highway 92 about ½ mile east of Birdie, where it significantly damaged several cottages and unroofed a large, ranch-style house. The tornado maintained EF3 intensity to about two miles southwest of Sunny Side. It weakened slightly as it moved through the Ponderosa Mobile Home Park on Patterson Road. No less than a dozen trailers sustained varying degrees of damage. Some mobile homes were obliterated, while neighboring ones received only minor damage. At least six injuries occurred at the park.

After hitting the trailer park, the tornado started to narrow, and it took a right turn toward the east-northeast veering into Sunny Side. Several warehouse-type structures were damaged or destroyed along Highway 41 on the western edge of town. One of these warehouses was the Sunny Side RV and Truck Sales business. The shop itself was torn apart, leaving its metal frame twisted and distorted, and 18 RVs were tossed about like toys. A yacht that was also in the shop’s parking lot was destroyed. A neighboring gas station was leveled.

The twister then weakened further as it moved through town. Falling trees mainly caused the remaining structural damage in Sunny Side. East of town, the tornado crossed Slaughter Road, where it slightly strengthened as it downed a large swath of trees in a forested area and knocked down a metal high-tension power pole.

The twister then crossed briefly into Henry County as it roped out. Fallen trees damaged a few homes and took out power lines. Finally, at 12:28 AM, 29 minutes after the tornado began, it dissipated along Hedgewood Drive, about two miles SSE of Hampton.

In the days following the tornado, volunteers showed up in Vaughn. At one time, there were as many as 1,200 volunteers in this community, including 55 church groups, the Salvation Army, the Red Cross, and even prisoners from the Spalding County jail. FEMA handed out grants to the residents that didn’t have insurance, and most decided to rebuild. The Vaughn United Methodist Church relocated to a larger lot and built a larger sanctuary than before. An anonymous donor asked a pastor to hand-deliver checks for undisclosed amounts of money to the town’s residents. Mike Porter collected money from cars passing by to look at the destruction; he collected $1,400, which was split up between everyone.

Meanwhile, in Sunny Side, Jason Miller, owner of the Sunny Side RV and Truck Sales, said that he lost his entire inventory. However, the next day after the tornado, they were able to take in two RVs for repairs, so they did not lose all of their business. The shop was fully rebuilt by October 2011. 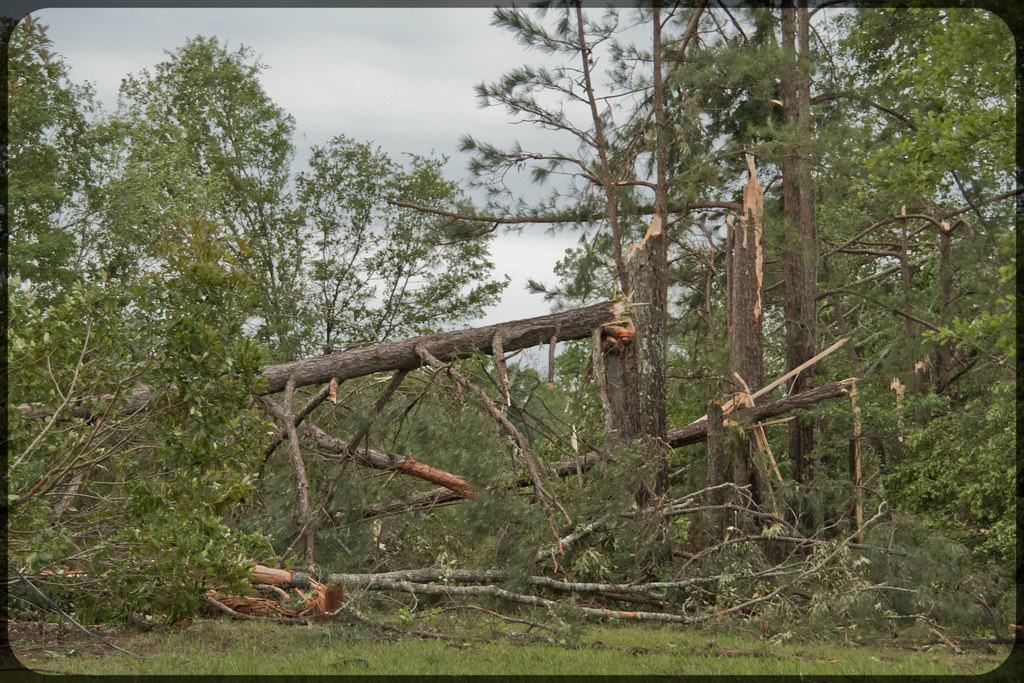 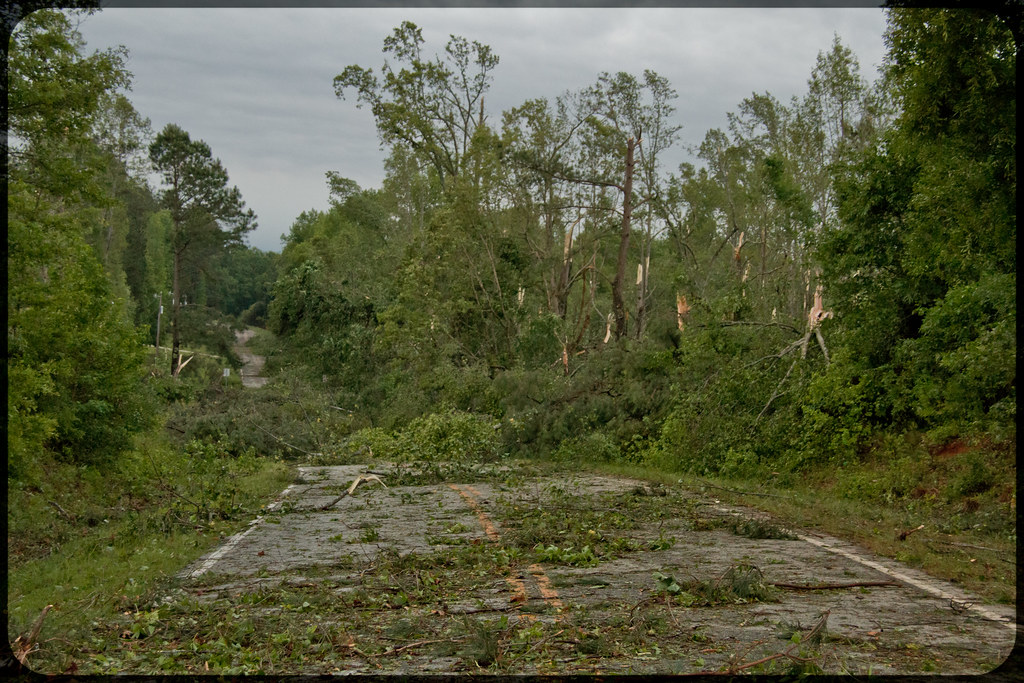 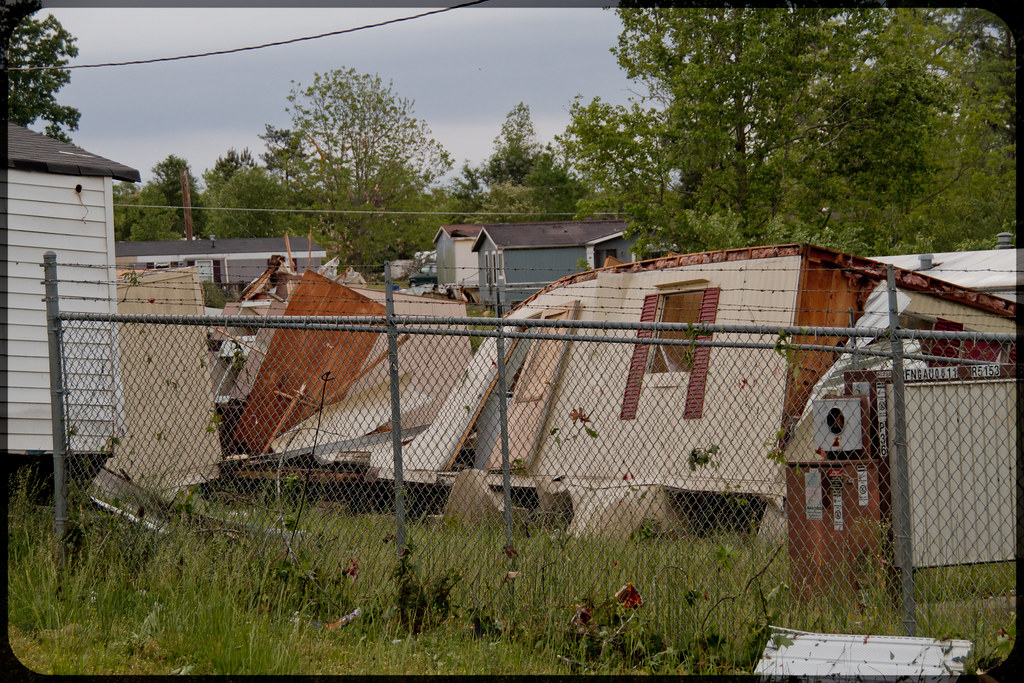 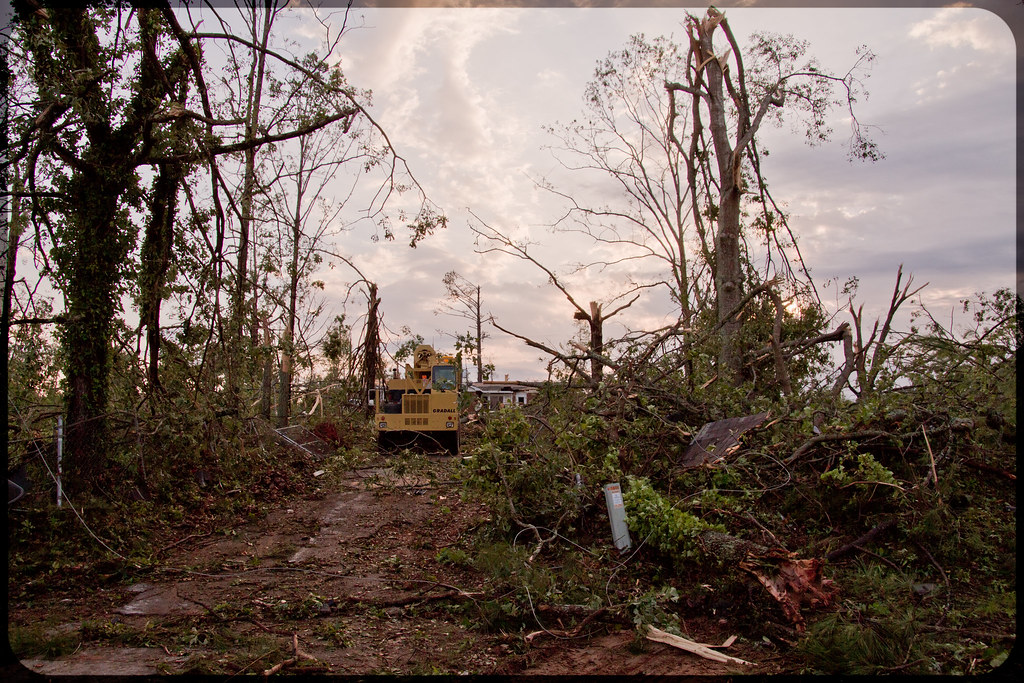 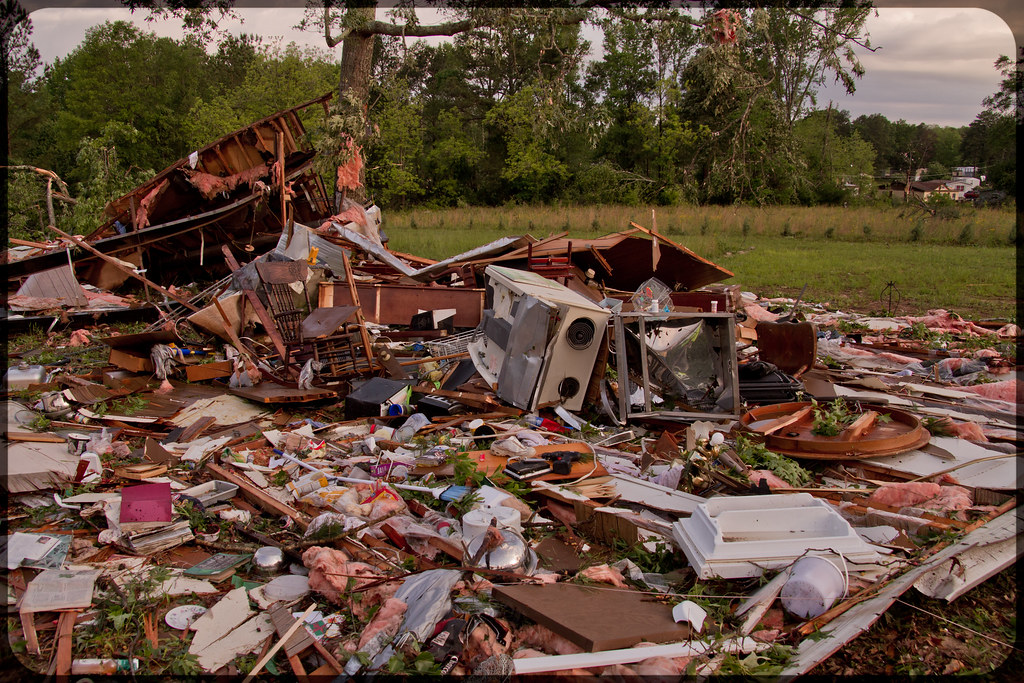 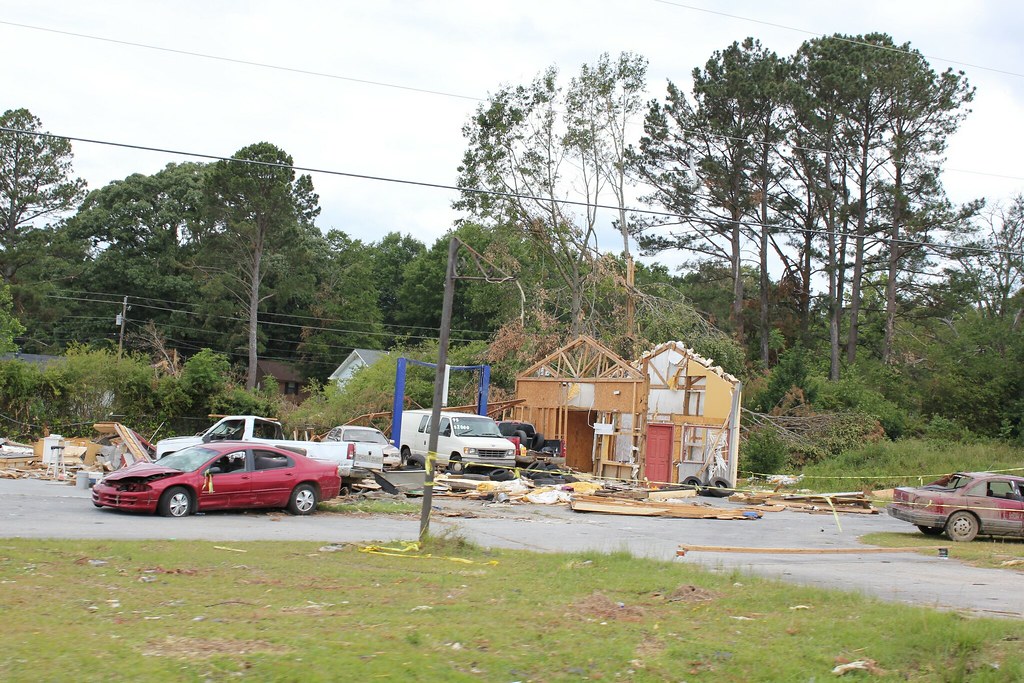 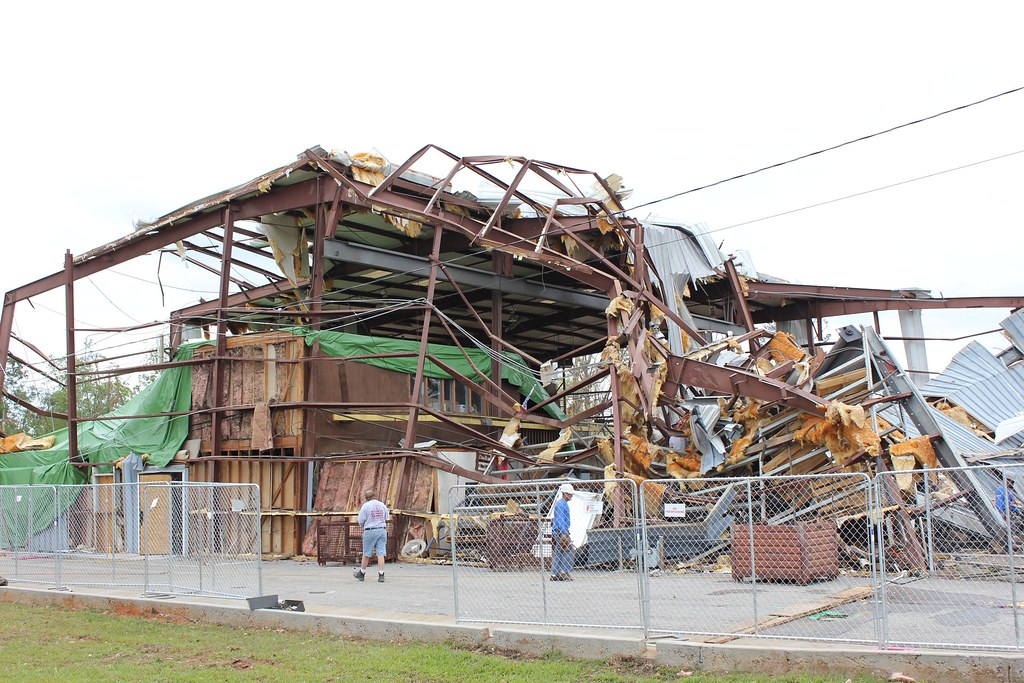 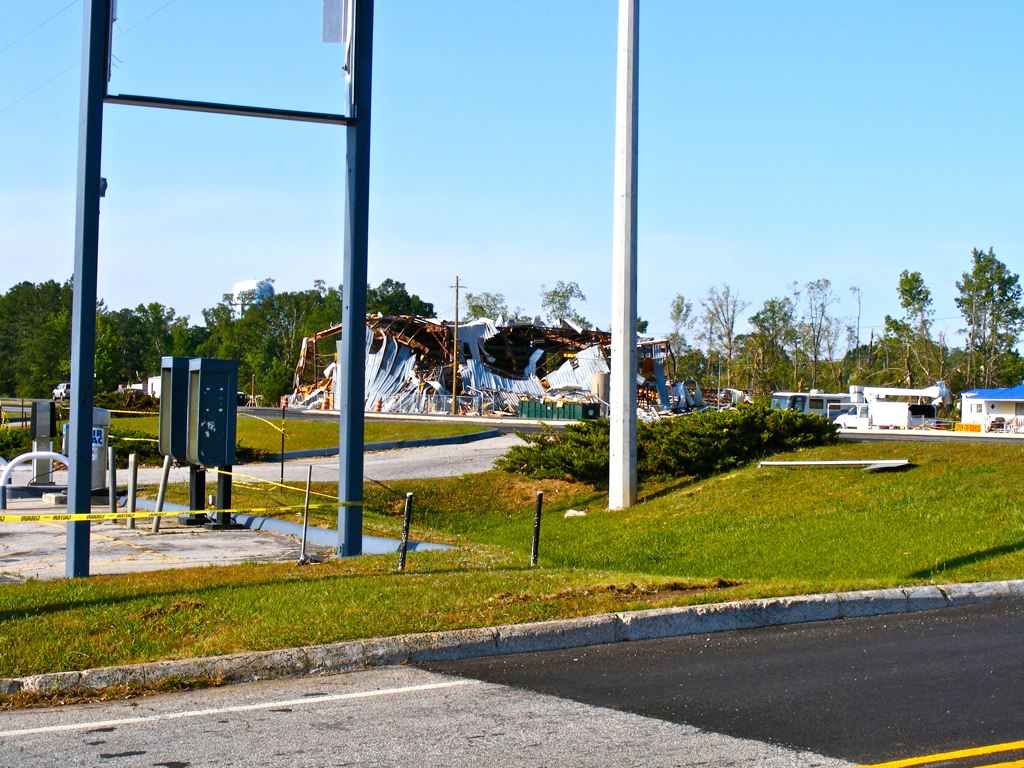 We gathered information for this event from the SPC/NCDC Databases, the April 2011 Storm Data Publication (SDP), the Damage Assessment Toolkit (DAT), the NWS Peachtree City Event Page, and analysis of satellite imagery and found the following discrepancies:

Heckert, J. (2011). The Town that Blew Away. Atlanta Magazine. https://www.atlantamagazine.com/great-reads/vaughn-tornado/