‘They had always said Vicksburg would never have a tornado because of the river’ – Marie Renaud, survivor of the 1953 Vicksburg Tornado

Marie was interviewed by the NWS Jackson for the 60th anniversary of the tornado. She was 11 years old when the tornado hit. She, like many Vicksburg, MS residents believed that the river would protect them from a tornado. Unfortunately, on December 5, 1953, a destructive twister crossed over the Mighty Mississippi and directly hit the town of Vicksburg.

I gathered most of the details about this event from a well-documented summary by the NWS Jackson. You can read it here.

They also have a page dedicated to survivor accounts. There are text and video interviews. Find it here.

At approximately 530pm CT, a tornado developed just west of the Mississippi River in Madison Parish, LA. There is little information about the damage in this area. Per the NWS Jackson, “Because it occurred in a sparsely-populated area, there is some uncertainty with respect to the exact location where the tornado first touched down. However, some accounts of the storm do indicate that damage occurred just west of the river in Louisiana.” The SPC Database does not list Madison Parish as a part of this tornado track. Thomas Grazulis in Significant Tornadoes does.

From this area, the tornado crossed over the Mississippi River bridge and moved to the southern tip of DeSoto Island where several trees were downed. It moved over the Yazoo Diversion Canal. It was in this area that a fisherman was killed. Per the summary, “His car was later found on Levee Street, and days later his boat was found along the Mississippi River near Port Gibson, but sadly he was never found.”

The tornado strengthened as it moved through the industrial area southwest of downtown Vicksburg. There was significant damage along the Vicksburg Railroad and to many businesses in this area.

The next stop was into the downtown area. Per the summary, “Residents in downtown Vicksburg were caught completely off guard by the tornado as it began to plow into the heart of town. Many heard the storm coming just mere moments before it arrived, and made a last ditch attempt to run into the back of buildings or basements for safety. As the tornado moved across South Street, one eyewitness says the Farmer’s Tractor Supply Company “just exploded right in front of my face”. The company’s owner lost his life. In the same block, several businesses were hit along Washington Street, most notably Mississippi Hardware and Ben Warren’s Clothing Store. Those two buildings almost completely collapsed, trapping several individuals including many who were seeking shelter in the basement at Mississippi Hardware. Two lives were lost at Ben Warren’s Clothing Store, including a daughter of the owner.

Crossing Crawford Street, severe damage continued to occur at the numerous businesses along Washington Street including the Sports Shop, Palermo’s Mens Shop, and at the S.H. Kress Dime Store. Two died at Palermo’s, including a customer and the son of the owner. A block to the east, the tornado damaged St. Paul Catholic Church. Though the historic building was not leveled by the tornado, the structure was later determined to be unsound and had to be rebuilt. The tornado continued across Clay Street causing damage at First National Bank, the Jefferson Davis Hotel, and Hotel Vicksburg. At the Strand Theatre, there was a partial wall and roof collapse.”

One of the most tragic events related to this tornado occurred at the Saenger Theatre. Stephanie Mitchell was celebrating her 10th birthday on December 5. Her sister had a birthday just a few days later. Their parents took the girls and some of their friends to the theatre to see a movie. George went home after dropping off everyone, Lillian, who was seven months pregnant stayed at the party. From the NWS Summary, “The Saenger, which was located at 1209 Walnut Street at that time, was directly in the center of the tornado’s path. Before the tornado hit, the power flickered and eventually went off. Then light suddenly reappeared in the large theatre as a wall collapsed, bringing the screen down along with it. The ceiling collapsed as well, trapping several people under their seats and debris. Sadly five children died at this location, each under the age of 10. Included in that count were two sisters.”

The Mitchell family did survive. Lillian and her daughters were trapped for several hours before being rescued.  Three days after this tragic event, she gave birth to another miracle, her third daughter.

As the tornado continued to churn northeast, several more buildings and businesses were hit.  There were more fatalities, including two toddlers who were killed at the Happyland Nursery.

There was tremendous damage to a residential area on the north side of town. “Many homes along Adams Street, Randolph Street, Fayette Street, Jefferson Street, Locust Street, and the surrounding areas were completely leveled. At least three deaths occurred in this neighborhood, including a mother and daughter.” 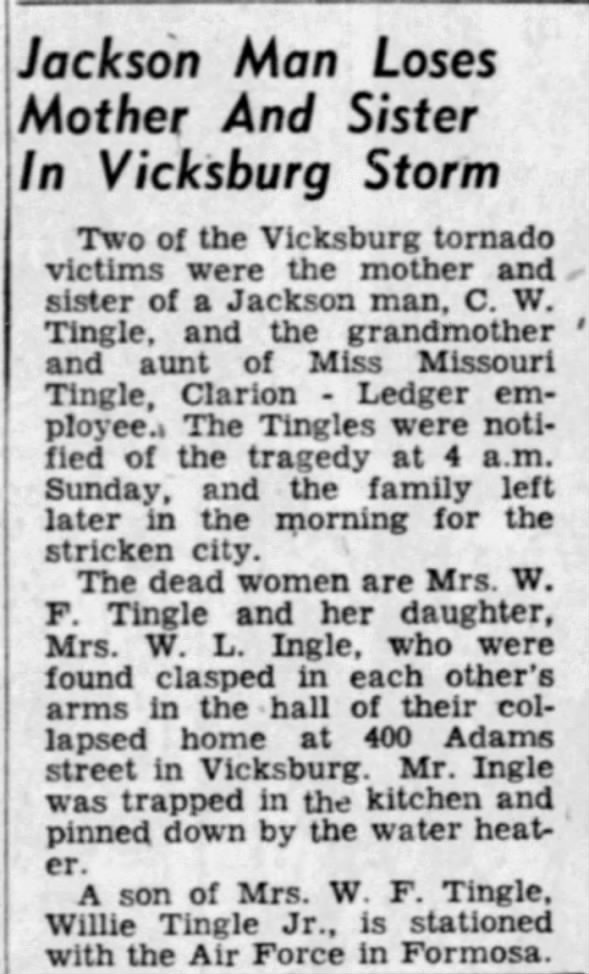 Next, the tornado moved into the western portion of the Vicksburg National Military Park. From the summary, “As it crossed Confederate Avenue, considerable damage occurred from the Fort Hill area eastward to the observation tower that once stood on that side of the park. Residences were then damaged along Union Avenue, also in the park. As the tornado exited the park, it moved into the Waltersville community. Along Sherman Avenue, 17 homes and a church were destroyed. A man died at this location, possibly the last life taken by the storm as it moved northward into a more rural wooded area and dissipated.”

An interesting observation: The Joe Wing Sing grocery store at the corner of Openwood Street and Farmer Street was demolished. Per the NWS Jackson, this was two blocks outside the main damage path. This may have been a satellite tornado.

On the 50th anniversary of the tornado, the Vicksburg-Warren Chamber of Commerce’s Leadership Vicksburg class dedicated the below plaque. It is on display at the River City Plaza at the corner of Washington and Crawford streets.

Officially, this tornado has a rating of F5. Thomas Grazulis in Significant Tornadoes lists the rating at F4. I asked him about the rating discrepancy. He said for an F5, “you need to examine the structures for integrity”. Since the Fujita Scale was not established until the early 1970s, the early tornadoes like the one in Vicksburg were not officially surveyed with a rating scale in mind, so details like structural integrity were not well-documented. Grazulis also stated, “any F5 rating prior to 1980 should not be trusted, because the civil engineering input from Texas Tech was not well established.”

Efforts were made after the development of the Fujita Scale to rate historic events. Per a journal article in Atmospheric Research entitled, “On the Implementation of the Enhanced Fujita Scale in the USA”, it was described how the historical tornado ratings were spearheaded. “This was done by paying researchers (mainly college students) to review newspaper accounts and come up with an estimate of tornado intensity for every tornado in the record. The researchers were given what materials that existed to document how to make F-scale ratings.” Fujita also gave ratings to historical events and did some in depth historical analysis. The article further explained that after the May 1970 Lubbock, TX tornado, a wind engineering research program was established at Texas Tech University and they began to do surveys of their own to “refine the wind speed-damage relationship and to answer questions about how to design structures to resist tornado winds.” Images from the Mississippi Department of Archives and History

Archived Tornado Talk Podcast about this event.  Hear the history from survivors and from Science and Operations Officer Chad Entremont of the NWS Jackson, MS. 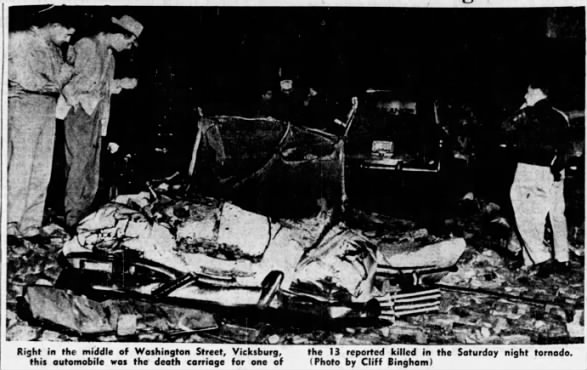 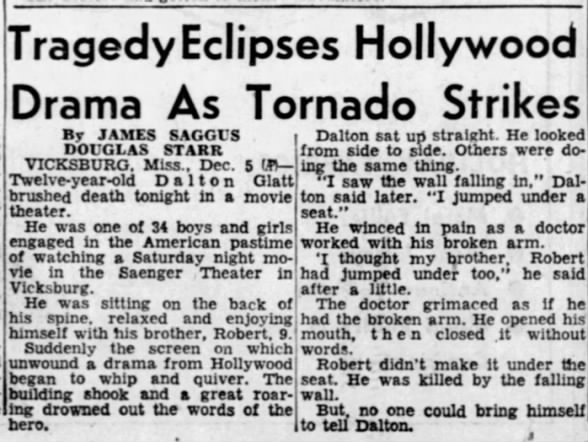 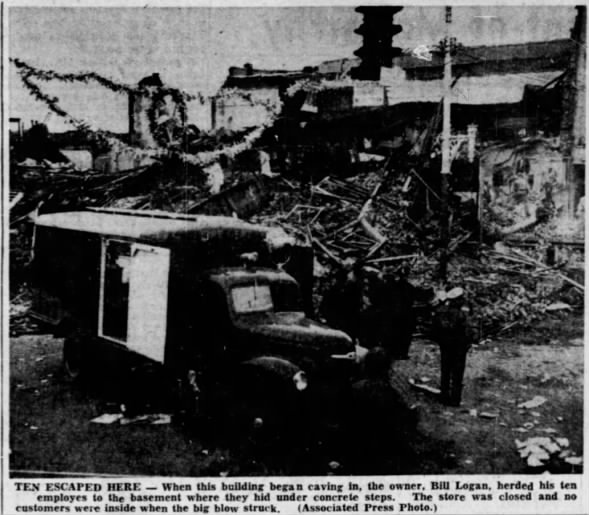 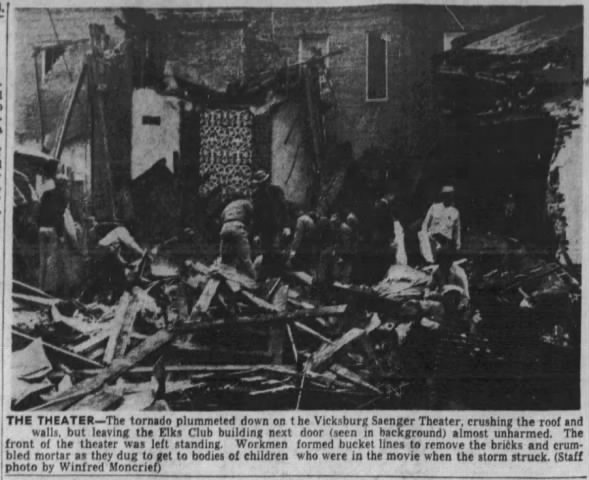 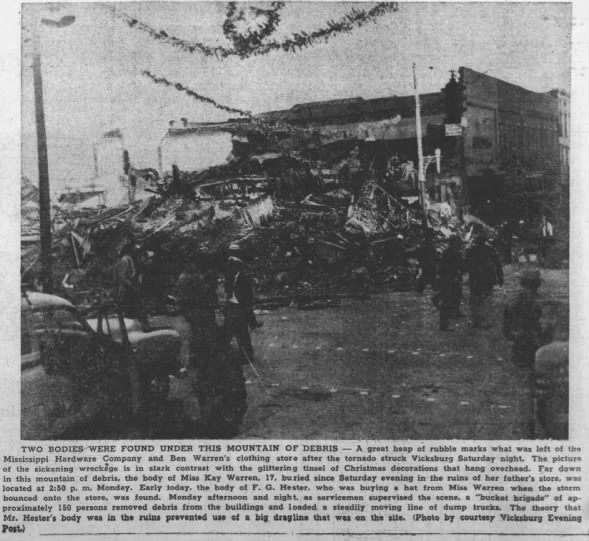 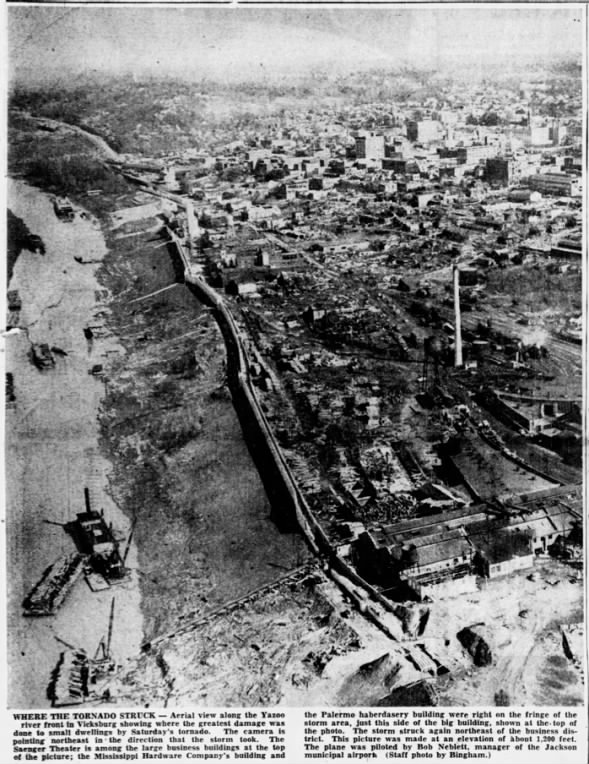 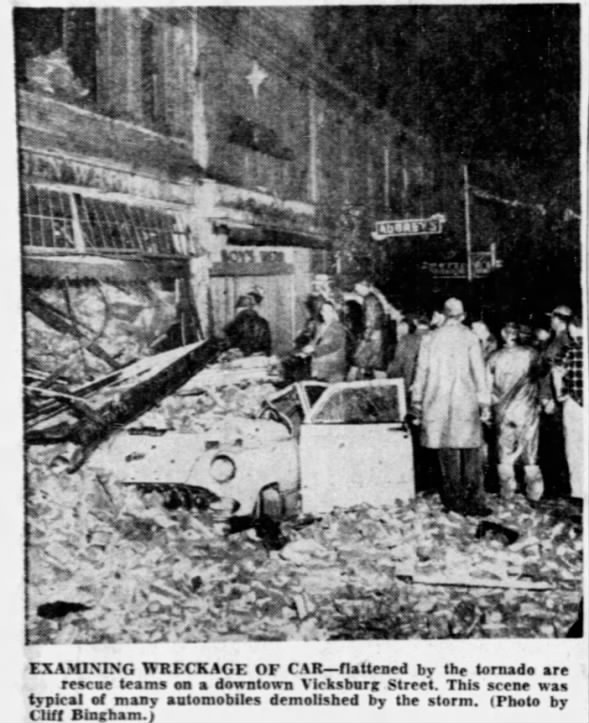 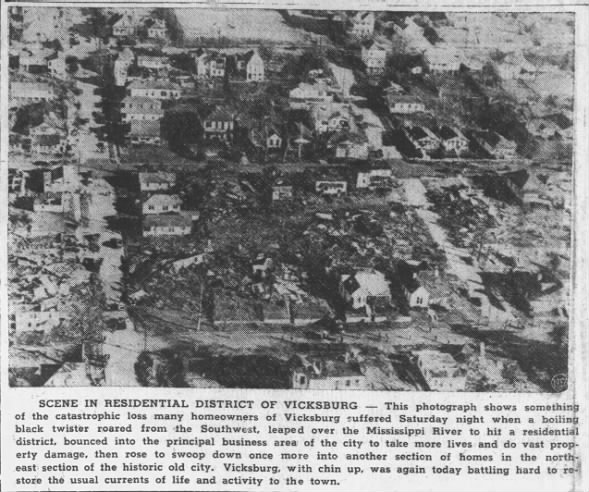 We gathered information for this event from the SPC & NCDC Databases, the December 1953 Climatological Data National Summary (CDNS), event summary from NWS Jackson and Thomas Grazulis in Significant Tornadoes and found the following differences:

NWS Jackson Summary of the Event

“On the implementation of the enhanced Fujita scale in the USA”,  Charles A. Doswell III, Harold E. Brooks, Nikolai Dotzek, Atmospheric Research 93 (2009) 554–563