A major tornado outbreak occurred on November 17, 2013. In total, 74 tornadoes were produced, seven were rated EF3 and two were rated EF4.

Some statistics from the NWS Chicago:

This summary documents this significant tornado that devastated Washington, IL.

It developed 2.4 miles SE of East Peoria at 1059am CST.  The tornado moved through parts of town destroying 20 homes and causing major damage to 75 other homes, 7 businesses and 5 apartment buildings. 400 vehicles in East Peoria were damaged. Thousands of trees and many power poles were destroyed.

The tornado then moved northeast and hit the town of Washington. It had strengthened at this point to EF4 intensity and the width was estimated to be between 1/4 and 1/2 mile. Per the NWS Storm Data Entry:  633 homes, seven businesses, seven apartment buildings and 2500 vehicles were destroyed. Major damage occurred to 280 homes, two businesses, the roof of a school, and several outbuildings.  Minor damage occurred to another 190 homes. Thousands of trees and power poles were snapped. “Nearly 5,000 people were in the path of this tornado:  however, injury and fatality totals were relatively low due to early warning and the fact that many people were either in church or out of town at the time.”

The tornado moved away from Washington and traveled another two miles through the rural areas of Tazewell County and then tracked into Woodford County.  It mainly pushed through open fields but it hit dozens of farmsteads at EF3 intensity. Approximately 70 farm buildings and seven homes were destroyed. About 100 vehicles were damaged including several semis at a truck stop north of Minonk. There were three injuries in overturned semis.  A cell tower was toppled and hundreds of power poles and trees were lost.

The tornado weakened further to EF2 status has it crossed into LaSalle County approximately 1/2 mile east of State Route 251.  Several power poles were snapped in this area. On E 7th Road, a home lost a good part of its roof and small outbuildings were demolished. As the tornado moved closer to Dana, additional power poles were snapped and a machinery shed was destroyed. North of Dana, “an addition to a home was completely leveled”.  Outbuildings here were also destroyed.

The tornado moved into Livingston County just northeast of Dana with max winds speeds of 135 mph.  Near the beginning of the path in this county, several outbuildings were damaged/destroyed.  Hardwood trees and power poles were snapped on N 200 E Road. At the intersection of N 400 E Road and Long Point Blacktop Road, a large shed housing a fire engine was destroyed and the fire engine was rolled onto its side. ” On the northeast side of that intersection, a wooded area saw extensive tree damage with numerous trees sheared off about 20 to 30 feet from their bases.” The tornado ended between N 450 E Road and Route 23.

There were 125 injuries and 3 fatalities reported with the Washington tornado. Steve Neubauer was killed by the tornado on November 17. An article from the Journal Star from November 20, 2013, states that Neubauer, “was apparently trying to follow his wife, Beth, and another person into the basement of his home when the tornado hit.”
11 days after the tornado, 82-year-old Rosamund Allison died of her injuries sustained during the tornado. Here is an article via the Chicago Tribune from November 30, 2013. 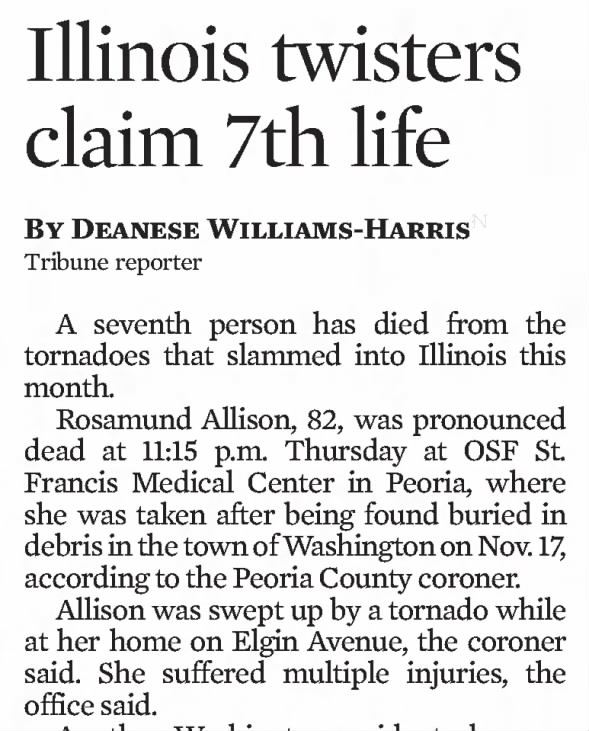 Another man died 6 weeks after the tornado hit. Unfortunately, I could not find information on his passing. 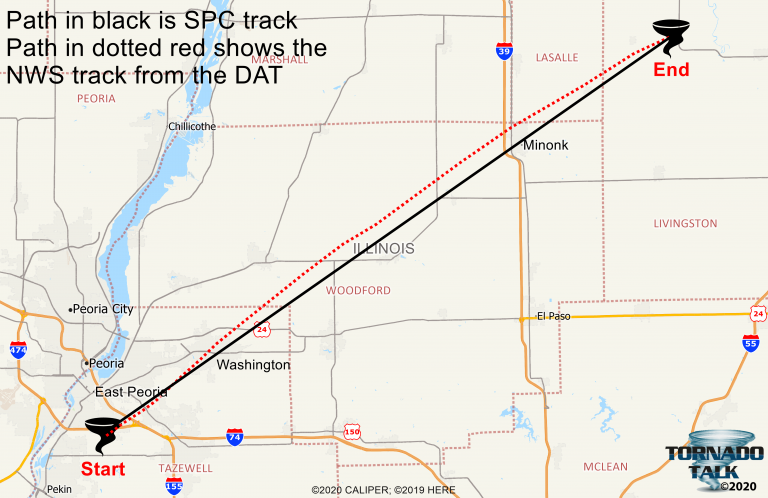 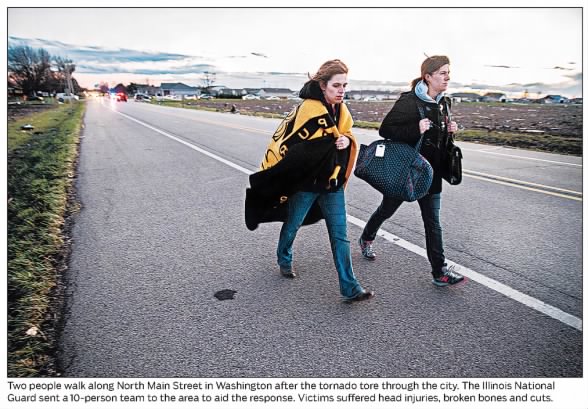 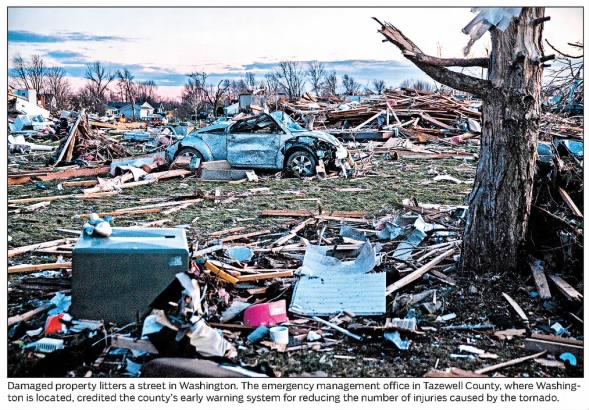 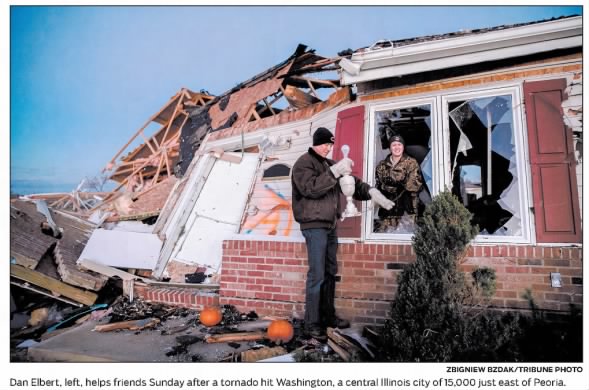 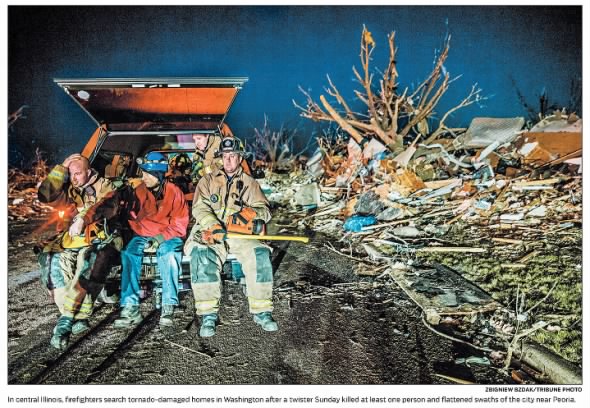 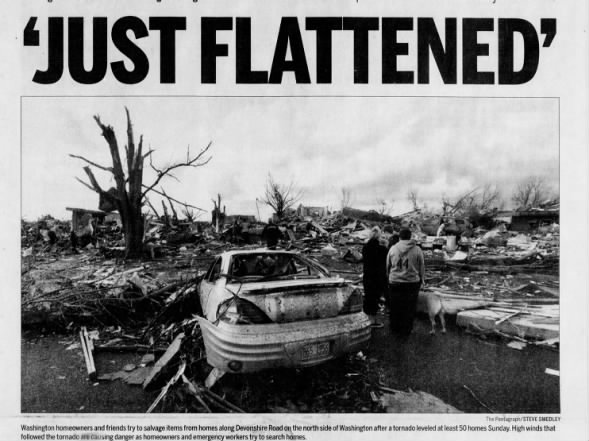 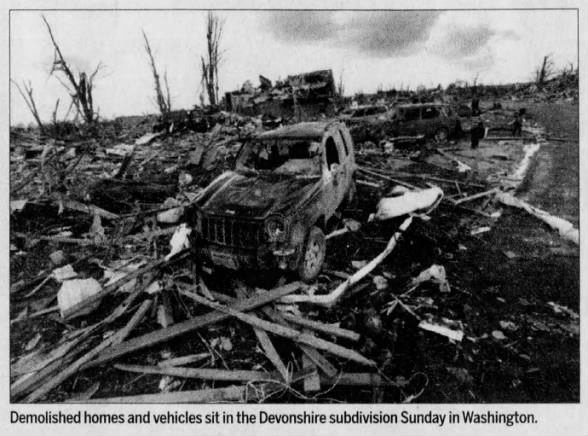 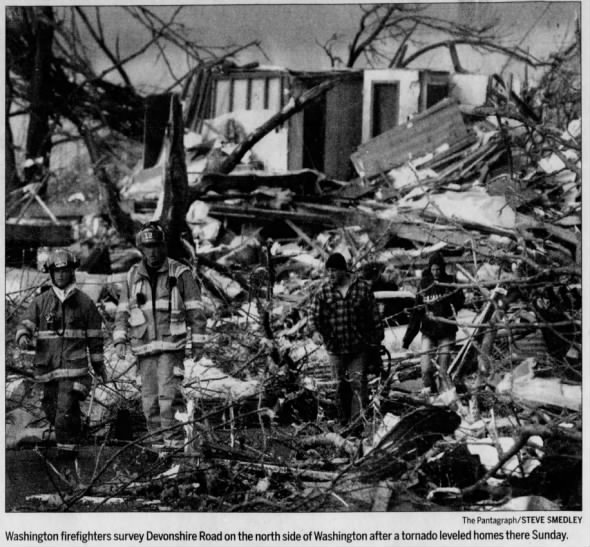 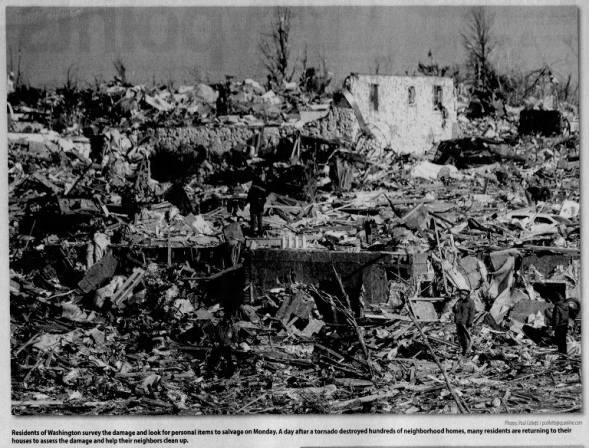