Per the Storm Prediction Center (SPC), 18 tornadoes occurred in a localized tornado outbreak across northeastern Nebraska, southeastern South Dakota, and northwestern Iowa. This included two EF4s. One of those hit the town of Wayne, NE, and is the focus of this summary. As the tornadoes were ripping through the eastern part of Nebraska, a blizzard dumped several feet of snow in the state’s panhandle. The Wayne tornado was the first EF-4 to affect the state of Nebraska since May 22, 2004.

The tornado formed about 8 miles south-southwest of Wayne, or about 4.75 miles northwest of Altona. For the first three miles of the path, the tornado moved generally north-northeast over rural areas producing EF-0 damage to corn crops and trees. As it crossed 851st Road, about 5 miles south-southwest of Wayne, the funnel quickly widened to 1.25 miles. Here, the tornado severely damaged or destroyed several barns and sheds. Per the NWS Damage Assessment Toolkit (DAT), the damage to this farm was rated low-end EF-2. The tornado crossed Highway 15 about two miles south of Wayne. On Highway 15, two homes were rated at EF-3. One of these homes merely had a portion of the roof, the garage, and the walls attached to the garage removed. The second home was not well-built and was swept off of its foundation. Photographs indicate there was little anchoring to the foundation, though the home was completely disintegrated.

Continuing north-northeast, the massive tornado clipped the southeastern part of the town of Wayne. The Wayne Softball Complex was heavily damaged. On the backside of the circulation, a trailer at the northern part of the park was rolled 220 yards to the south. The twister veered toward the northeast across Centennial Road through an industrial park and across the Wayne Municipal Airport. It was in this area where the tornado reached its peak intensity of low-end EF-4, with estimated maximum winds reaching 170 mph. At the industrial park, large metal warehouse buildings were heavily damaged or “mangled into rubble”. Most of the Grossenburg Implement (a John Deere dealership) was flattened. Here, dozens of tractors and combines were damaged or destroyed by the onslaught of flying sheet metal. The Pacific Coast Feather Company, a mattress factory located beside the airport, was completely destroyed. The factory was never rebuilt, and the company relocated to North Carolina.

The twister then slashed across the Wayne Municipal Airport. Two hangars were mostly swept away, leading to the destruction of 15 planes. Four other large buildings at the airport, including the terminal, were also destroyed. Fortunately, two men working there had taken shelter and were not injured. In the airport, only a single damaged structure was left standing. The Automatic Weather Observation Station (AWOS), which is used by the NWS to record the official weather information for the town, was also destroyed. A house belonging to Jim and Sandy Hoffman at the airport was swept away. In Episode 22 of the Tornado Talk Podcast, Sandy was interviewed. She reported to us that they had moved into the house just two weeks prior to the twister. Hearing on the radio that a tornado had been spotted, the couple took refuge in their basement. Within a couple of minutes, the tornado struck their residence. The house was swept completely away, with any appliances and furniture not in the basement shredded. Jim sustained a head injury from flying debris, but both survived without any lasting harm. A recliner had originally sat four feet in front of where the couple sheltered in the basement. Cement blocks from the foundation had flown over their heads and onto one another where the recliner was. However, after the tornado, the recliner was on top of that pile, still intact.

John Dunning was also interviewed in Episode 22 of the Tornado Talk Podcast. He is the chief information officer for Wayne State College and had a truly remarkable story. That day he had been driving back to Wayne from a business meeting in Chicago. In the car with him was his friend and colleague Michael Anderson, the Vice President for Academic Affairs at the college.

12 miles out from Wayne, Michael’s wife called and notified them a tornado had been spotted south of town. John crested a hill slightly elevated above the town. Seeing no tornado and just a thunderstorm, he continued onwards. First, it began to rain, then hail, and then the wind began to pick up. The rain was becoming so hard he couldn’t see much at all. As they drove past the Wayne Municipal Airport and onto a bridge over a creek, they began to see pieces of buildings flying across the road in front of them. Realizing the incredible danger they were facing, John made a critical decision. Clearing the bridge, he swerved and drove the pickup right down into a deep drainage ditch off the highway that fed into the creek. The windows exploded. Michael hastily exited the vehicle, but John lost precious moments struggling with his seatbelt. The last thing John remembered was jumping out of the truck. It is believed the two would likely have died if they had stayed in the truck.

Unfortunately, the moments lost fumbling with a seatbelt would cost John greatly. Michael and others were able to piece together what happened to John during his memory loss. As John was jumping out of the pickup truck, he was struck by barbed wire fencing. The force of the winds tangled him in it, then hurled and dragged his body with the barbed wire 20-30 yards. Michael, who was lying down and clinging to the tall grass at the bottom of the ditch, did not realize John had landed right behind him. Michael did feel the air being sucked from his lungs as the center passed over. As the tornado was moving away, Michael noticed an industrial dumpster being bounced toward him. He rolled out of the way, and the dumpster landed on John before continuing on its way. After the tornado, Michael found John and flagged down several passing chasers for help.

The ditch that John Dunning and Michael Anderson took shelter in on the east side of Wayne, from Wayne, NE Tornado Relief Facebook Page.

John awoke to Michael standing over him and telling him not to move. John did not feel anything and thought himself uninjured, just sleepy. In fact, John was lucky to still even be alive when Michael found him. John had a compound tib-fib fracture that had torn through the front of his shin; a broken left femur; multiple pieces of wood embedded in his right leg; a severed right artery in his underarm; a partially torn right radial nerve; broken vertebrae; broken ribs; a concussive skull fracture; and a punctured lung. These injuries were the result of flying debris from the tornado. John was rushed into an ambulance and raced to a hospital. He was put into a medically induced coma on a ventilator. He would stay that way for 12 days, was in the ICU for 19 days, and received 36 surgeries during that time. With strong support from the community and several months of rehabilitation, he was able to eventually recover.

The tornado continued to move northeast from the airport and struck a farmstead along E 21st Street. The house had most of its roof torn off (EF-2 damage). The tornado then turned more to the north-northeast and crossed into Dixon County. The tornado was still over 1.3 miles wide but had weakened to an EF-2 as it crossed the county border. Two homes sustained severe roof damage. Numerous farm buildings, grain bins, and farm equipment were destroyed across this portion of the path. There was also severe damage to trees, power poles, and crops in this area. The tornado dissipated about 6 miles north-northwest of Wakefield. 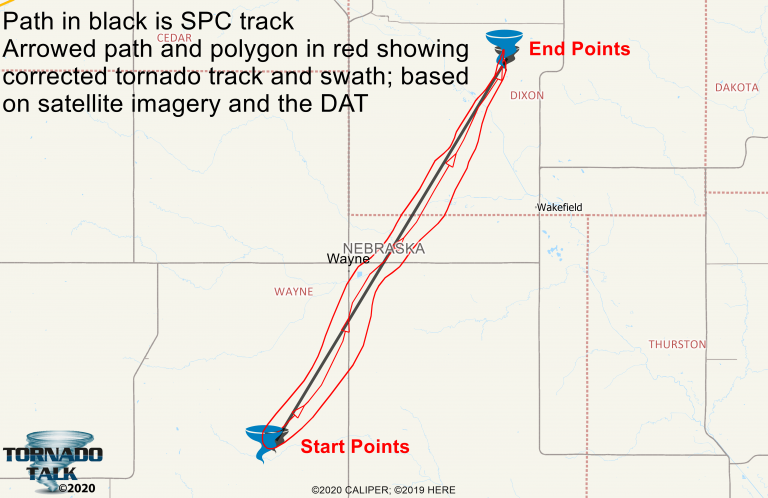 Corrected coordinates based on the NWS Damage Assessment Toolkit and satellite imagery:

A before and after GIF created with Maxar Technology satellite imagery viewed through the Google Earth Pro platform. The before image was taken on September 27, 2011, and the after image on October 7, 2013. The industrial area destroyed is at the center and bottom left. The Wayne Municipal airport is at the top right.

A before and after GIF created with Maxar Technology satellite imagery viewed through the Google Earth Pro platform. The before image was taken on September 27, 2011, and the after image on October 7, 2013. At the top center, the location of Jim and Sandy Hoffman’s home is labeled. Near the center is the ditch that John Dunning and Michael Anderson took shelter in. At the top left is the Wayne Municipal Airport. At center-right is the industrial area.

The visible centerline of the tornado can be seen in the ground as it crossed over the runway of the Wayne Municipal Airport. The clustered smaller lines from the center to near the top right are from vehicles combing the field for debris. The tornado itself encompassed all of this image. Seen with Maxar technologies satellite imagery through the Google Earth Pro platform. Taken on October 7, 2013.

Images of the Tornado from James Wilson

Radar Image of the Storm from Brian Smith

An aerial view of devastation to the industrial and airport areas on the east side of Wayne from KCAU 9 News.

Aerial image of damage to the industrial area from the Nebraska Emergency Management Agency.

Aerial image of damage to a building at the Wayne Municipal Airport from the Nebraska Emergency Management Agency.

Before and after images of an airplane hangar from the Wayne Municipal Airport.

Another view of the hangar from the Wayne Municipal Airport.

Before and after images of airport buildings from the Wayne municipal Airport.

Planks removed from a bridge near the airport from the Wayne Municipal Airport.

An airplane maintenance hangar from the Wayne Municipal Airport.

An aerial view of destroyed airport buildings from the Wayne Municipal Airport. At top left is the foundation of Jim and Sandy Hoffman’s home.

Anchor bolt attachment for a steel girder at the airport from Wayne, NE Tornado Relief.

Sheet metal wrapped around a tree at the airport from The Wayne Stater.

Severe damage to industrial buildings and a large combine from The Wayne Stater.

Severe damage to a large combine from The Wayne Stater.

Damage to an industrial building from Nebraska Business First.

A center pivot said to have been moved over a mile from Patrick Buettner.

A piece of agricultural equipment embedded in a car dealership from Sara Schlickbernd.

Pieces of wood embedded in the ground from Sara Schlickbernd.

An aerial view of the Pacific Coast Feathers Company from Siouxland News.

Another aerial view of the Pacific Coast Feathers Company from KCAU 9 News.

An aerial view of scattered trailers at the Pacific Coast Feathers Company from  KCAU 9 News.

An aerial view of a truck tossed into a field south of Wayne from KCAU 9 News.

An aerial view of a large metal tank tossed into a creek on the eastern side of Wayne from KCAU 9 News.

An aerial view of a home that was swept away south of Wayne from KCAU 9 News.

We gathered information for this event from the SPC & NCDC Databases, the NWS Summary of the event, and the Damage Assessment Toolkit and found the following differences:

NWS Summary Of the Event