This summary looks back at an estimated F3 tornado from November 1, 1922.  It crossed through parts of Jasper County, MO and the town of Webb City.  Information for this event came from the following resources:

Hit at 0015 local time. There were 15 injuries and one fatality. The path length was two miles and the width 70 yards.  Rating given: F3.

The woman killed was Mrs. Nancy Frad, 54 years old.  She was found lying on a mattress in a neighbor’s yard 100-200 yards from her destroyed home. Here is a clip from the St. Louis Star and Times on November 1, 1922 followed by another from the St. Louis Dispatch on the same date.

The tornado began on a hill along South Hall Street and skipped north-northeast for about two miles. It leveled 10 to 12 homes and several outbuildings in the first touchdown. Most of the destroyed homes were small; one, two, and three-room low-income dwellings on the outskirts of town; although a few larger homes were demolished. The two-story Barclay House, on South Hall Street, was completely destroyed. Mr. Barclay was seriously injured, his wife and two daughters were also injured. The funnel briefly lifted as it moved across a valley and then dipped to ground level again on Centennial Street. Several homes were damaged or destroyed in this area.

The next area of damage was to three businesses along East Daugherty Street, between Webb City and Cartersville. These businesses were the Sedgwick Furniture Company, Ball and Gunning Miling Company, and the Mattews Lumber & Coal Company. They all had their roofs partially torn off and their sides were damaged. The final touchdown occurred on North Elliot Street where the twister snapped several telephone and telegraph poles. It also leveled a “modern home” and damaged at least two others.

The Joplin Globe reported on some oddities that occurred in the tornado in a section title “Freaks of the Tornado”. Here are a few notable ones:

– The home of Frank Elliot, a blind man, was blown completely away. His son Harry was in bed when the tornado struck. Harry’s bed remained in place, and he was not even awakened.

-Two homes were demolished, but the coal shed between the two of them was left standing.

-A garage was blown away, the car inside was reportedly picked up and carried around the house, being deposited on the other side of the house.

-At one house, a small rocking chair was sucked out of a window. 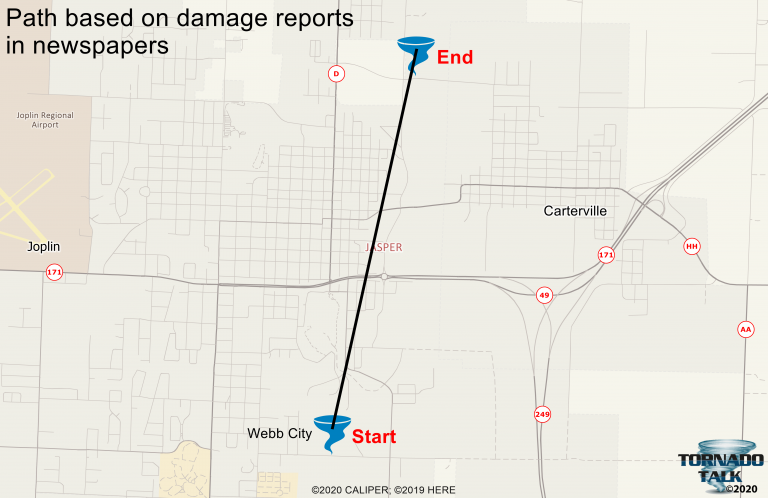 Coordinates based on damage descriptions in the November 2, 1922 Joplin Glob article about this event.