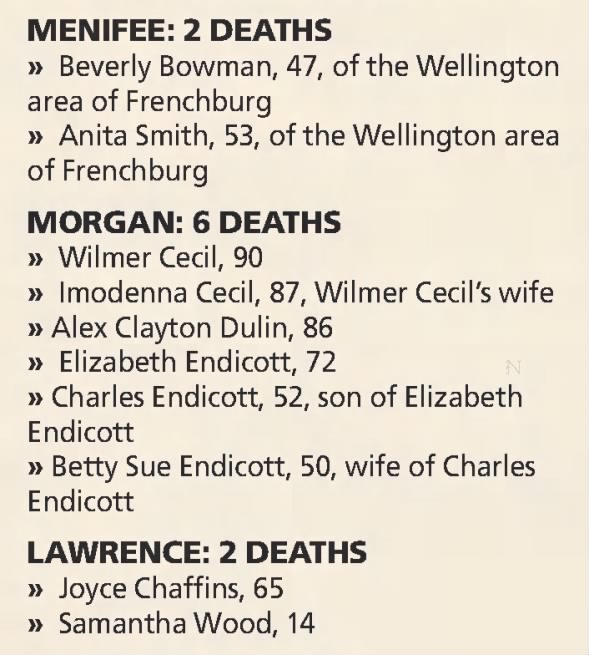 One of the hardest-hit areas was the town of West Liberty, KY, in Morgan County.  Every building in the downtown area suffered some degree of damage.

A very interesting statement was found in the March 2012 Storm Data Publication:  “In the aftermath, a few residents around Charleston, including the Kanawha County community of Tornado, found paper envelopes, canceled checks, and pictures around their property, that had fallen from the sky. The items were from the West Liberty, Kentucky vicinity.”

Items from West Liberty, KY, were found 120+ miles away in Charleston, WV.  And I double-checked…Tornado, WV, is a real place!

This tornado was a part of a large outbreak that occurred March 2-3, 2012.  There were at least 70 confirmed tornadoes. Two were rated EF4.

There were nine tornadoes rated EF3, including the one that tore through West Liberty, KY.

Here are highlights from the NWS Survey of this event:

This tornado developed on Tarr Ridge about 2 miles SW of Mariba, KY, at 539pm EST.  It moved ENE crossing Highway 77.  Several homes had extensive damage.  On Opossum Hollow Road, a brick house was completely destroyed, except for the basement.  There were two fatalities in Menifee County as a direct result of the tornado.  Another person died during the clean-up effort.

This EF3 tornado moved into Morgan County around 546pm EST just to the NW of Ezel.  It made a direct hit on downtown West Liberty just before 6 pm.  Extensive damage occurred to nearly every structure in town.  The 105-year-old courthouse was hit.  The depression-era WPA building that houses the community center and the 100-year-old United Methodist and Christian churches had severe damage.  Away from West Liberty, numerous structures were damaged.  The path width ranged from 3/4 to 1 mile through the county.  The estimated max winds were 140 mph in Morgan County.  There were 6 fatalities.

This long-track tornado clipped SW Lawrence County near Terryville.  Two mobile homes were destroyed.  It then moved into the extreme NW tip of Johnson County west of Keaton.  It straddled the Johnson/Lawrence County line until moving completely back into Lawrence County between Keaton and Martha around 618pm.  Damage in Johnson County was consistent with an EF1 rating. There was roof damage and downed trees.

The tornado moved back into Lawrence County south of Blaine.  A double-wide mobile home along Spencer Branch was lifted off its cinder block foundation and slammed into the adjacent hillside. Rescue workers extricated three people from the home.  A 14-year-old girl and her 65-year-old grandmother were killed.  The 75-year-old grandfather was injured.  Two other juvenile occupants escaped without injury.  In the Chapman area, a family of four sheltered in their bathtub.  The house was destroyed, but they survived.  30 homes were destroyed in Lawrence County, and another nine had major damage.

Next in line was Wayne County, WV!  The tornado crossed the Tug Fork River into Wayne County.  It passed between Dunlow and Radnor, then into Kiahsville and Cove Cap.  In the Dunlow area, the damage was from hilltop to hilltop, just over 1/2 mile wide.  Five homes were destroyed, and one sustained major damage.  Three vehicles were damaged.  The East Lynn Lake Campground had damage to electric and phone lines and downed trees.  In Kiahsville and Cove Gap, about 15 homes were destroyed, and seven had major damage.  These were mobile homes and manufactured.  “A resident near Cove Gap said, we never thought anything like this would get in here.  It got in, and it didn’t want to leave.  I guess it wasn’t here that long, but it seemed like forever.”

“Ironically, it may have been a local funeral that saved lives.  A funeral was being held in the community of Wayne that evening for a local Cove Gap resident.  Several neighbors attended the funeral and were not at home when the storm hit.  When they returned, they found their homes damaged.”

This significant tornado weakened and dissipated in Lincoln County, WV.  There was tree damage in the Ranger area.

Damage Photos and Radar Via the NWS Jackson, KY 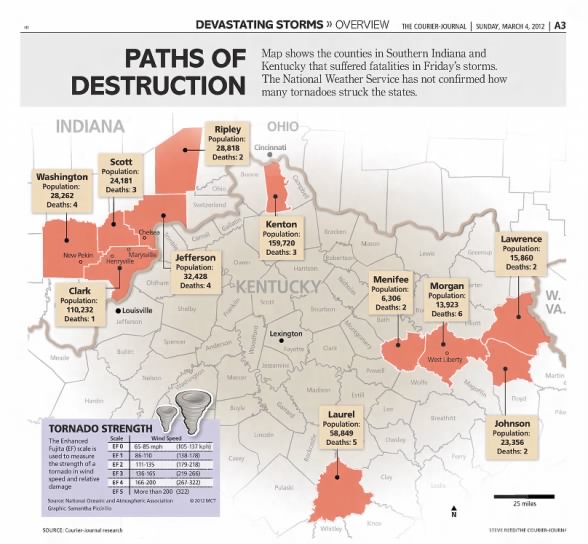 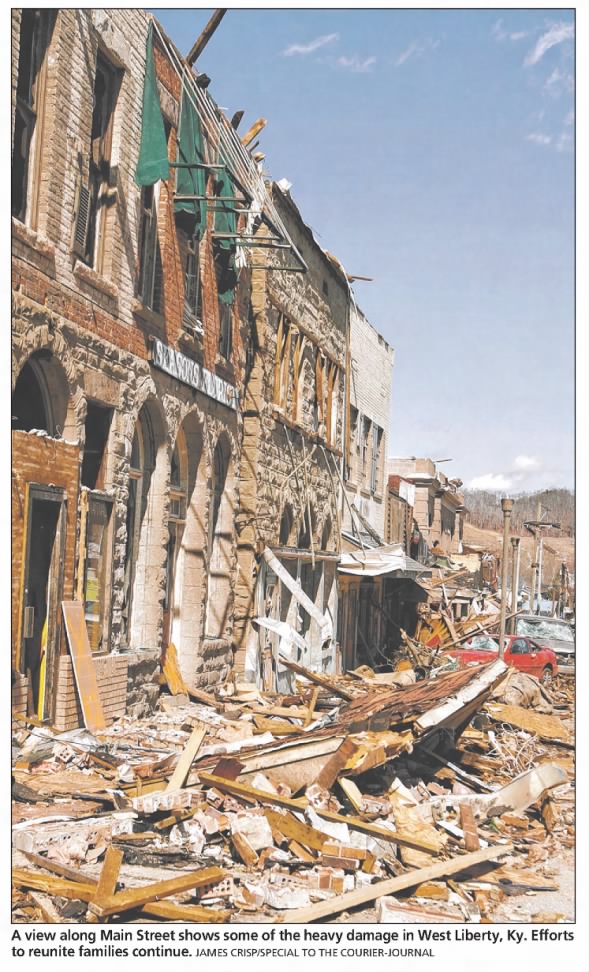 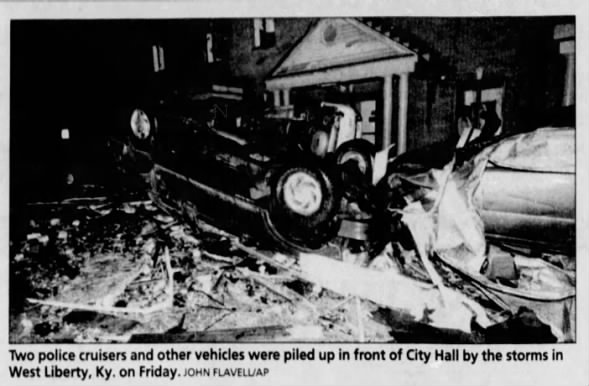 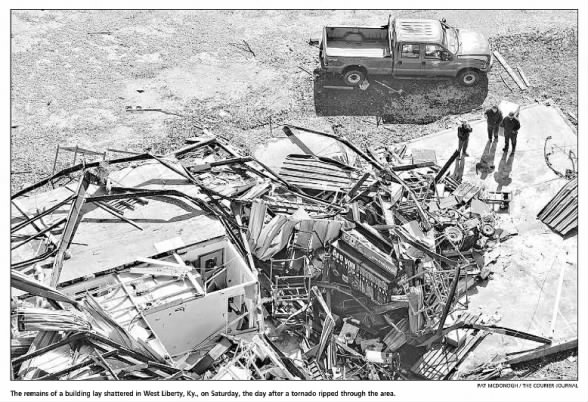 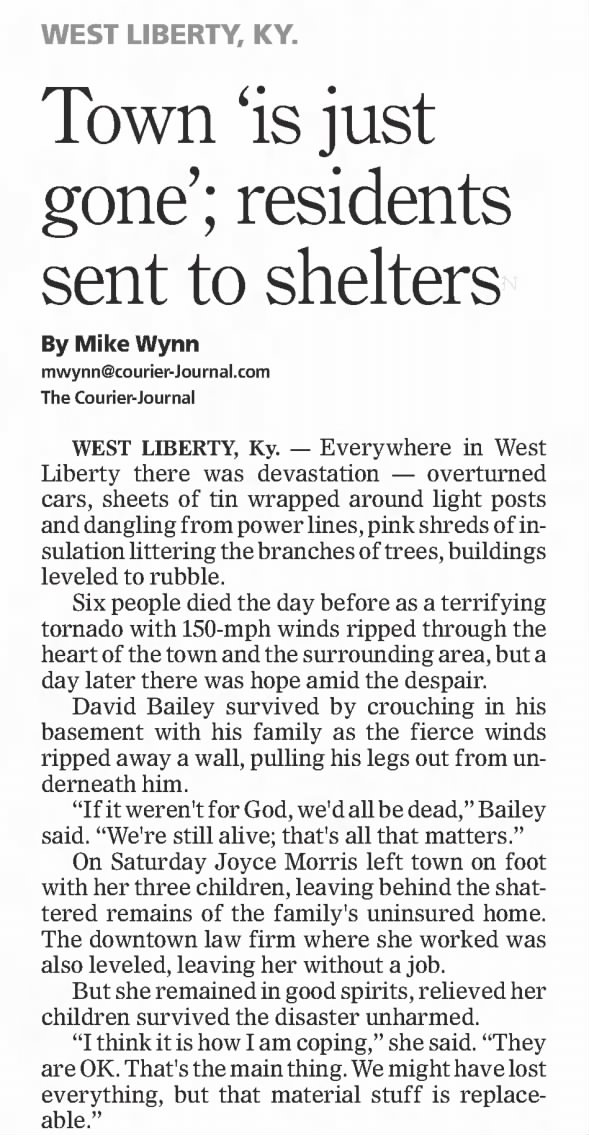