Per The Storm Prediction Center, there were 24 tornadoes that occurred on May 23, 1966.  The strongest was an F3 that quickly hit parts of northern Hunt County, TX and the Wolfe City area.  There were actually 3 tornadoes in Hunt County close to the same time.  Two struck in open county, one of which damaged a residence.  The F3 hit the northern edge of Wolfe City destroying two homes and severely damaging 8 others.  One of the homes was moved 25 feet into the street, 3 persons were injured in that home.

A tornado destroyed two homes, severely damaged eight others, and injured five persons in the north edge of Wolfe City.  Two other tornadoes struck in open country northwest of the city.  One of these damaged the Howard Davis residence.

Three persons in the Butler home, 109 West Warren Street were injured when the home was moved 25 feet into the street.

Luther Woodberry of 400 North Greenville was hit by flying debris while watching the tornado destroy the Arthur Williams’ residence.  His sister, Mrs. Odessa Wright, at the same address, was laying on the floor of the house together with other members of the family when the wind picked her up then dropped her back to the floor. The Williams’ residence was demolished as the occupants took refuge in a storm cellar.  Interior and exterior walls of the home were scattered in bits and pieces over a 200-yards area.  A large chunk of concrete from the home was carried 150 feet and dropped through the roof of the Wolfe City Mattress Factory. A 1951 Ford near the Williams’ residence was carried 100 feet and rolled into a mass of scrap.

The tornado continued southeastward and struck the James Robinson home at 508 North Santa Fe, damaging it beyond repair.  The C.W. Robinson home, the Blackwell home at 105 West Warren, the Maples’ house, the Butler home, the Pairsh and Kiser homes on North Santa Fe, were severely damaged.  Total property damage was estimated at $50,000.

Map extracted from the NCDC Database. 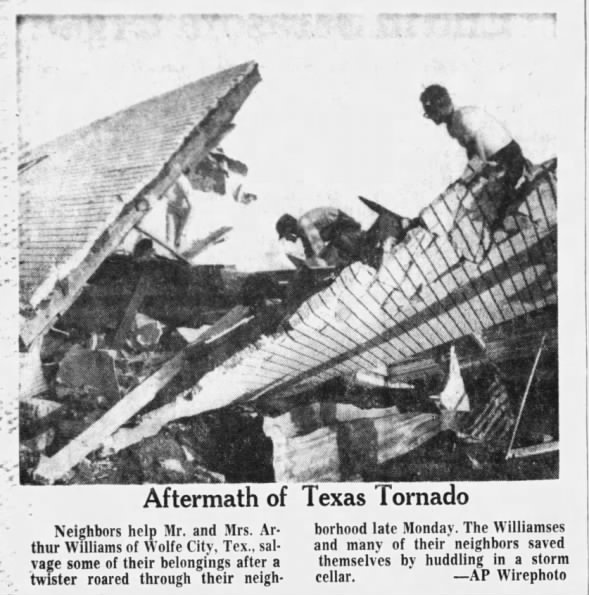 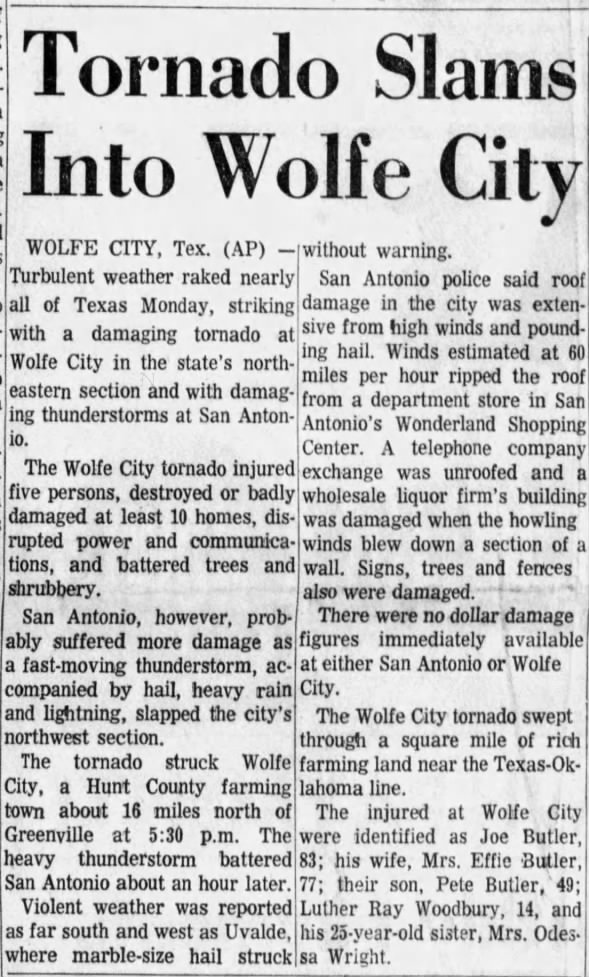