An EF4 tornado with estimated wind speeds of 170-175 mph traveled close to 9 miles across parts of Wood and Ottawa Counties in Ohio on June 5, 2010.  The destruction began at 11:20PM EDT near I-80 and Oregon Road, East of Perrysburg.  For 14 minutes, a path of destruction was carved from the south side of Moline to near Metcalf Airport, and across the NW side of Millbury (where EF4 damage was found).  The tornado moved into Ottawa County and lifted just west of Clay Center at 11:34PM EDT.

Seven people were killed along the tornado’s path.  One of the fatalities occurred in a car near Lake High School.  A 56 year old female was killed by flying debris while driving her car on State Route 795 near the school complex. The woman’s daughters were following in another car which was also destroyed. The daughters both sustained minor injuries.

The tornado intensified to EF4 status on the north side of Millbury along Main Street.  Over a dozen homes were destroyed.  Debris from this tornado was found dozens of miles away on some of the islands in Western Lake Erie.

The NWS Storm Data Entry is very detailed and well written.  The full text is below.

A devastating tornado moved across portions of northern Wood County during the late evening hours of June 5th. The tornado reached a peak intensity of EF4 and was responsible for the deaths of seven people. Five of the victims died immediately with the other two passing away from their injuries at later dates.

The initial touchdown occurred east of Perrysburg along Oregon Road just to the north of the Ohio Turnpike. The tornado then moved east northeast toward Toledo Metcalf Field as an EF0 to EF1. The tornado intensified to an EF2 as it crossed East Broadway Street. Over two dozen homes in a neighborhood bordered by East Broadway to the west and State Route 795 to the north and east were heavily damaged or destroyed. The worst of the damage was along Shawnee and Neill Avenues in this neighborhood.

The tornado then crossed State Route 795 and followed the highway toward Metcalf Field. The tornado intensified to EF3 at that time. Several homes along Moline-Martin Road were destroyed between State Route 795 and Metcalf Field. An occupant of one of the homes, an 87 year old man, was injured by the tornado and later died. As the tornado approached Metcalf Field it crossed a railroad yard and overturned a couple dozen railroad cars. The tornado then moved across the southern end of the airport grounds and destroyed the Lake Township Administrative and Police Department building located just northwest of the intersection of Cummings Road and State Route 795. A 20 year old female was killed by the tornado just outside of the police department. She had left her vehicle along with her boyfriend and child to seek refuge in the police station. She was caught outside and was reportedly killed by flying debris. At the police station, the tornado destroyed at least six police vehicles and one emergency response vehicle. The emergency response vehicle was found over 1000 feet away from its original position. One police vehicle was found wrapped around a large tree.

After doing extensive damage to an agricultural business, the tornado struck the Lake Local School District complex along State Route 795 and Lemoyne Road. Lake High School took a direct hit from the tornado and was damaged enough to be considered destroyed. The nearby middle and elementary schools sustained considerable roof damage. The high school gymnasium was scheduled to hold a commencement ceremony for the graduating senior class on June 6th. Large sections of the gymnasium collapsed. A field house, cafeteria and auditorium adjacent to the high school were destroyed. At least eight school buses were overturned and destroyed by the tornado.

The tornado continued to move parallel to and just north of State Route 795 at EF3 intensity. A 56 year old female was killed by flying debris while driving her car on State Route 795 near the school complex. The woman’s daughters were following in another car which was also destroyed. The daughters both sustained minor injuries.

The tornado continued east northeast and crossed Interstate 280 just north of the State Route 795 interchange before moving across open fields for about a mile. The tornado may have briefly weakened to EF2 intensity, but then strengthened back to EF3 intensity as it crossed Bradner Road to the west of Millbury. The tornado destroyed several homes in a neighborhood bordered by Bradner Road to the west and Cherry Street to the south. A 47 year old man was killed in house on Case Road in this neighborhood. The man’s daughter was the valedictorian of the graduating senior class at Lake High School which was destroyed by the tornado.

The tornado then intensified to EF4 as it approached Main Street on the north side of Millbury. Over a dozen homes were destroyed or heavily damaged along Main Street. A 36 year old woman and her four year old son were killed in one of the destroyed homes on Main Street. The woman’s 37 year old husband died on June 12th from injuries sustained from the tornado. Several more homes were destroyed or heavily damaged on Hille Drive and Woodville Road before the tornado crossed North Fostoria Road and moved into Ottawa County as a weak EF3 or strong EF2 tornado.

This tornado was on the ground for around six and a half miles in Wood County and destroyed or heavily damaged over 60 homes. Dozens of additional homes sustained minor damage with another couple hundred homes affected by the storm. Dozens of vehicles were also destroyed. Hundreds of trees were toppled or snapped by the tornado along the damage path which was up to 400 yards in width. The tornado debarked some of the larger trees along the damage path. At least one high tension utility pole was toppled by the tornado and widespread power outages occurred in Millbury and Walbridge. Damage to the Lake Township infrastructure was estimated at five million dollars with tens of millions of losses to the Lake Local School District. The exact number of injuries caused by this tornado is unknown, but at least 17 people had to be hospitalized in nearby Toledo. Debris from this tornado has been found dozens of miles away, including on some of the islands in western Lake Erie.

A strong tornado moved into western Ottawa County from Wood County during the late evening hours of June 5th. The tornado entered the county at 11:30 pm EDT as a weak EF3 or strong EF2 tornado. A couple homes on Trowbridge Road just east of the county line were heavily damaged. The tornado then continued east northeast to just north of the intersection of Billman and Trowbridge Roads where a few more homes were significantly damaged. After crossing Billman Road, the tornado took a turn to the right and intensified back to EF3. The tornado crossed Reiman Road just south of Trowbridge Road and finally lifted just before reaching Bolander Road. Around a dozen homes near the intersection of Trowbridge Road and Reiman Road were damaged. In Ottawa County, a total of 11 homes were destroyed with another 14 homes sustaining major damage from the tornado. Around 20 additional homes sustained lesser damages. This tornado was on the ground in Ottawa County for just over two and a quarter miles and had a maximum width of around 200 yards. Two injuries were reported. 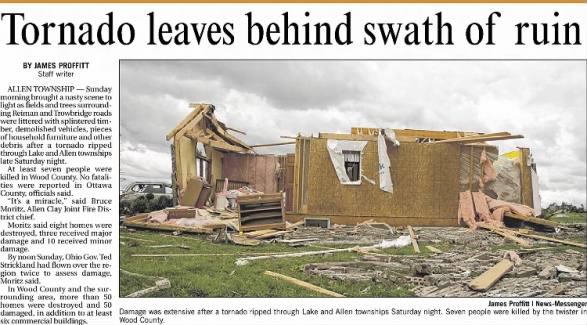 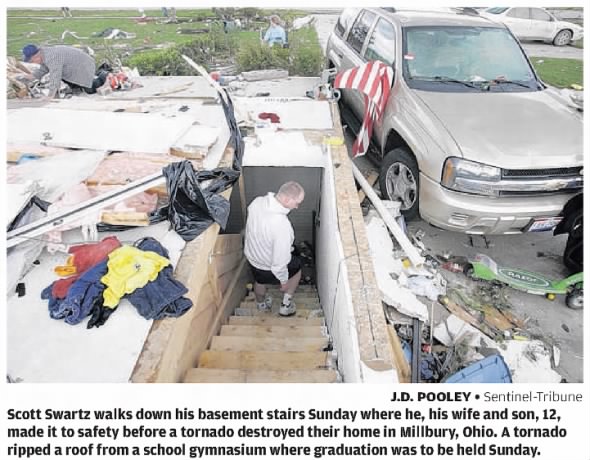 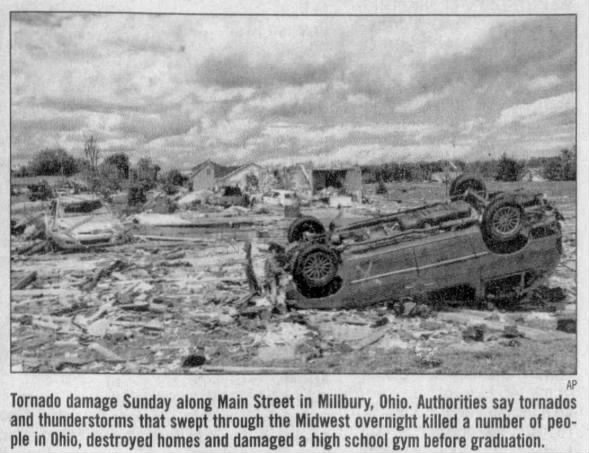 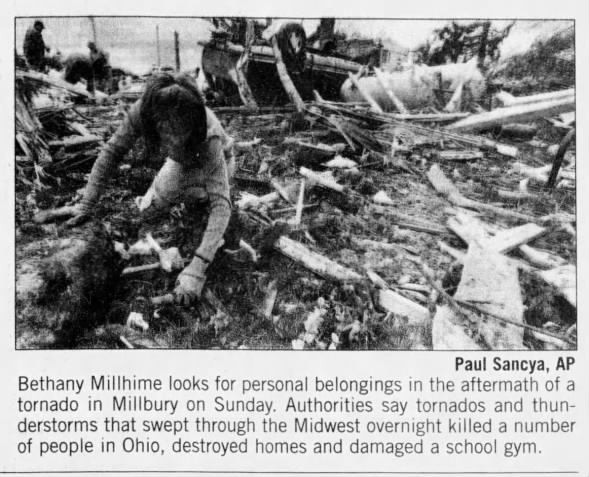