It is the deadliest and most destructive tornado to ever hit the New England area.  The Worcester, MA Tornado occurred during the mid-afternoon time on June 9, 1953.  The destruction was overwhelming.  Per Thomas Grazulis in Significant Tornadoes, an F5 rating could have been given to this event. “Many of the houses that were nearly leveled were two- or three-story tenement buildings, built with dozens of interior walls which would add considerable structural strength.”

The Worcester tornado was the final event in a 3-day outbreak.  Per a blog article from Day in Weather History, “severe storms began on June 7th over the Central Plains before spreading into Michigan and Ohio on the 8th.  A total of 46 tornadoes occurred over the 3-day period, including a powerful, F5 tornado in Flint, MI on the 8th.”  We have a detailed summary on the Flint-Beecher tornado found here!

In a slideshow about the Flint/Worcester Tornadoes, the NWS show some of the history of this system and decisions that were made by the Weather Bureau Office in Boston.  “Meteorologist Al Flahive and other staff met at 10am to discuss mention of “tornado” for their next forecast issuance. Decided against it so not to be “unnecessarily alarming.””

Instead, the crew issued the first-ever severe thunderstorm forecast wording in New England.

Per the NWS presentation, the first ever tornado warning in New England was also issued on this day.  A phone call was received after 5pm from Blue Hill Observatory in Milton, MA to the Weather Bureau Office.  Observer John Conover relayed this message about falling debris, “…It’s coming from great heights, shingles, small branches, paper….boards several feet long…”

The Weather Bureau Office sent a warning via teletype at 545pm.

There are discrepancies in the record on the path length.  SPC has a length of 34.9 miles.  The Climatological Data National Summary (CDNS) entry though shows a length up to 46 miles and this is accepted as the correct path length by Grazulis.

The CDNS entry shows a death toll of 90 and that was the long-accepted death toll for many years.  In 1993, John M. O’Toole released the book “84 Minutes, 94 Lives.”  It is an eyewitness account of the Worcester tornado.  He shows that 94 people lost their lives during this event.  The official SPC database reflects that new total.

Debris from this tornado was found in the Boston Area and on Cape Cod (over 100 miles away).  The NWS presentation denotes that a frozen mattress was found in Massachusetts Bay near Weymouth.  And books and clothing ended up at Blue Hill on outer Cape Cod.

This tornado, one of a series which also struck just south of these areas and Exeter, NH on this data, was the most violent and destructive tornado in New England’s history;  And its length, width and extent of devastation rank it among major tornadoes of record in the United States.  Number of deaths and injuries and amount of damage inflicted but his storm exceed combined totals of all previous tornadoes in New England.  Average rate of forward speed was 36mph.  Crop damage mostly to fruit trees. 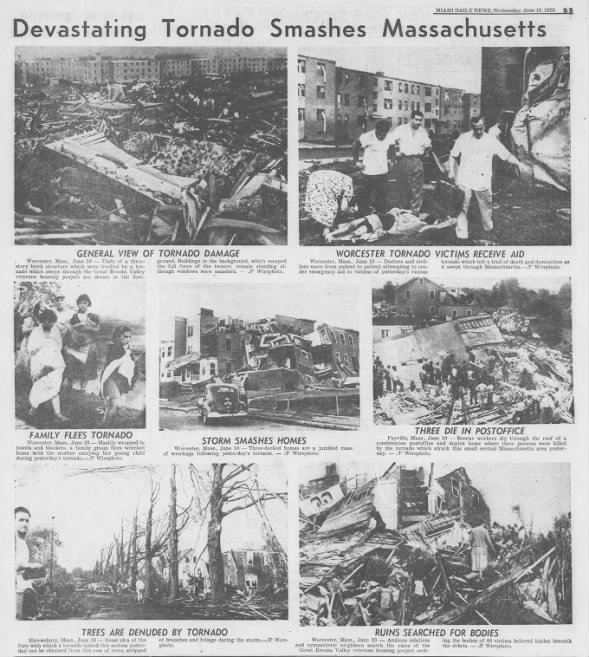 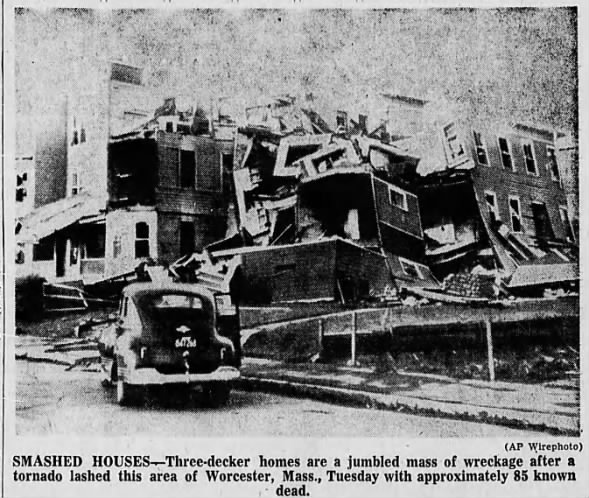 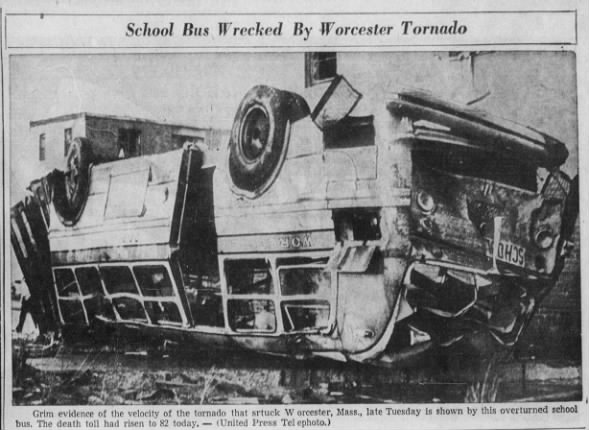 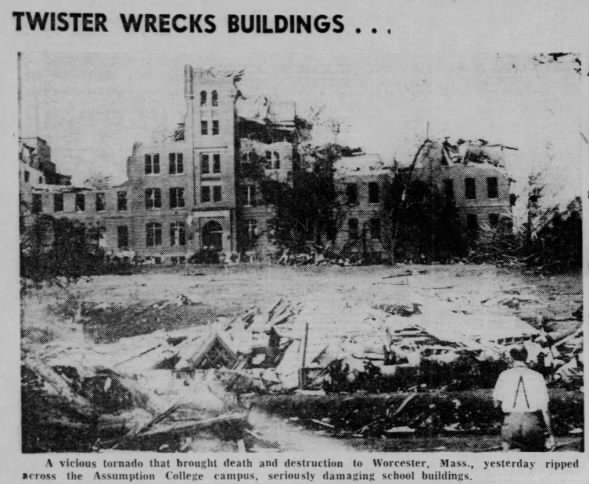 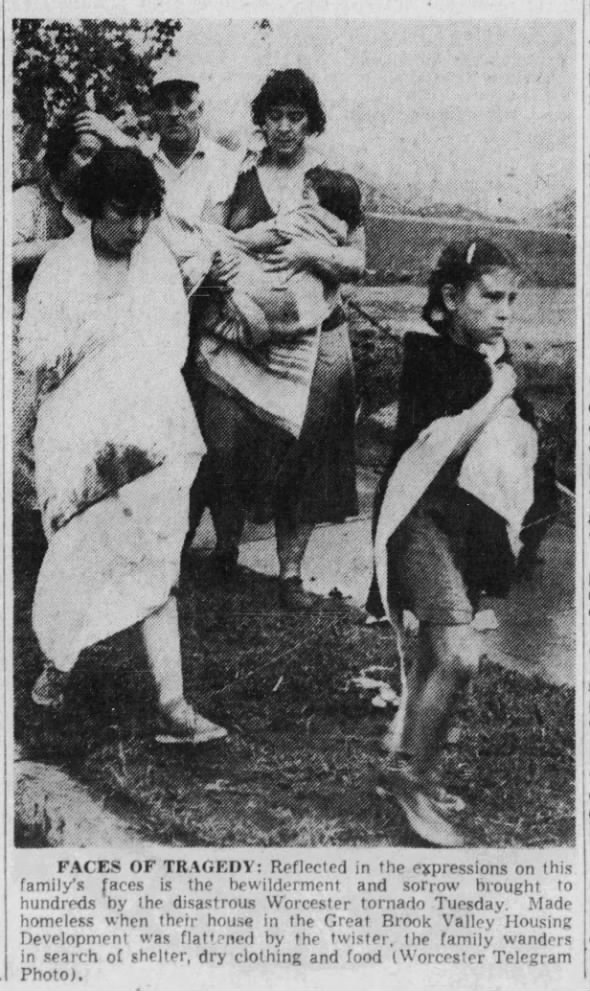 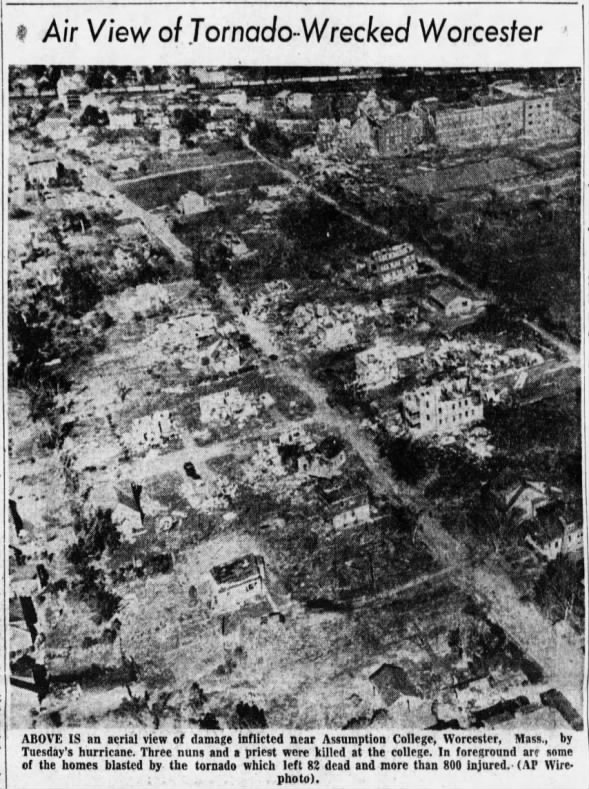 We gathered information for this event from the SPC & NCDC Databases, the June 1953 Climatological Data National Summary (CDNS) and Thomas Grazulis in Significant Tornadoes and found the following differences:

NWS Powerpoint Presentation on the Flint and Worcester Tornadoes