The Storm Prediction Center (SPC) Database lists 3 tornadoes on October 22, 1972. We look at one of those in this summary. It was given a rating of F3. Thomas Grazulis in Significant Tornadoes believes the damage was more in the F2 range. Read the full summary here! 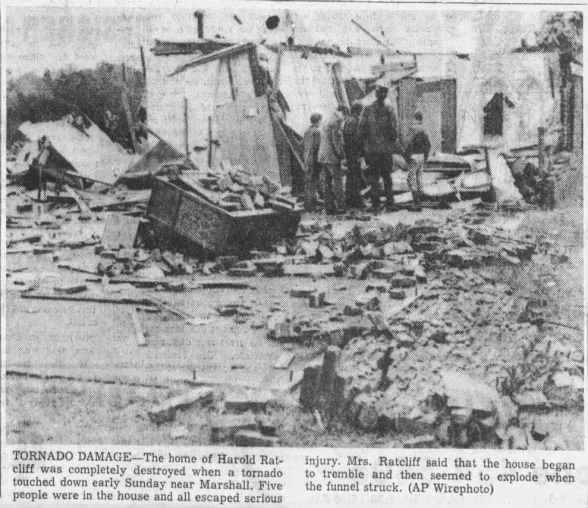 October 22, 1888: A possible F2 tornado traveled 12 miles through St. John the Baptist Parish in Louisiana. “It cut a two-mile-long swath across the Whitney Plantation, north of Wallace, destroying a dozen buildings”. Two tenants were killed.

On October 22, 2007, an EF1 tornado tracked through Rural Hale County, AL, near Laneville. At least 30 homes were hit, and there were two minor injuries. Source.

October 22, 2011: A hailstorm pounded Union City, Oklahoma. Car windshields were smashed. One hailstone was measured at 4″ in diameter. Source.

On this day in 1962, US President John F. Kennedy addressed television about Russian missile bases in Cuba and imposed a naval blockade on Cuba, beginning the missile crisis. Check out more historical events at onthisday.com!

On this day in 1811, Franz Liszt, Hungarian piano virtuoso and composer, was born in Doborján, kingdom of Hungary, Austrian Empire [now Raiding, Austria]. He died in 1886. Source:  Britannica.

On this day in 1942, NBC became the first network to televise a pro football game; Brooklyn Dodgers beat Philadelphia Eagles, 23-14 at Brooklyn’s Ebbets Field! Get more daily history at onthisday.com!

On this day in 2017, Australian musician, songwriter and record producer George Young died aged 70. Young, the brother of AC/DC’s Angus and Malcolm Young, was a member of the Easybeats and co-wrote the band’s 1966 hit ‘Friday On My Mind’. Born in Scotland in 1946, he migrated to Australia with his family as a teenager, forming The Easybeats after he met Dutch-born artist Harry Vanda in Sydney. After the band broke up in 1969, Vanda and Young embarked on a songwriting career that saw the pair produce dozens of hits. They became two of Australia’s best-known songwriters, with Young’s work including ‘Love Is In The Air’ and ‘Yesterday’s Hero’ both hits for John Paul Young.  Get into the groove with more music trivia at thisdayinmusic.com!