On This Day: November 17

A major tornado outbreak occurred on November 17, 2013. In total, 74 tornadoes were produced, seven were rated EF3 and two were rated EF4. Per NWS Chicago, this ranked as the 4th largest outbreak for the state of Illinois, in terms of number of tornadoes, since 1950. The EF-4 tornado with maximum estimated winds of 190 mph that struck Washington, IL was the strongest on record for Illinois in the month of November since 1950. That is the topic of this summary! Read here!

November 17, 1921: A possible F4 tornado moved 3 miles in Polk County, AR. Near Wickes, two homes were swept away. Eight people were killed in one of the homes, seven of which were members of the same family. “The mother and six children were buried in common grave. The body of one child was carried for a half mile.” 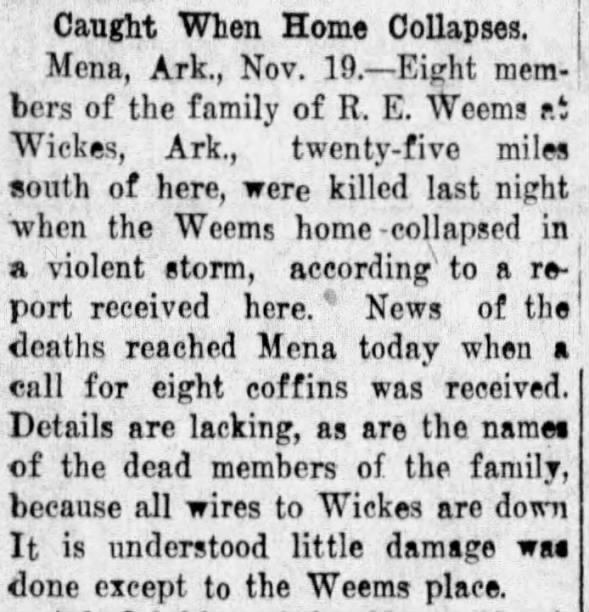 November 17, 2014, an EF2 tornado tracked for 22 miles through Calhoun, Liberty, and Gadsen Counties in Florida. It reached peak intensity near Blountstown, where it heavily damaged a prison.

On this day in 1970, Douglas Engelbart received the patent for the first computer mouse. Check out more historical events at onthisday.com!

On this day in 1933, the Marx brothers film “Duck Soup” directed by Leo McCarey and starring the Marx Brothers is released in the US! Get more daily history at onthisday.com!

On this day in 1984, Wham! Were at No.1 on the UK album chart with ‘Make It Big’ and No.1 on the US singles chart with ‘Wake Me Up Before You Go Go’. Michael’s inspiration for the song was a scribbled note left by his Wham! partner Andrew Ridgeley for Andrew’s parents, originally intended to read “wake me up before you go” but with “up” accidentally written twice, so Ridgeley wrote “go” twice on purpose. Get into the groove with more music trivia at thisdayinmusic.com!