Say the words “Pilger” and everyone in the weather community knows what you’re talking about. On the afternoon of June 16, 2014, a supercell thunderstorm would produce 5 tornadoes, one rated EF0 and four rated EF4, across northeastern Nebraska. The town of Pilger was hardest hit when it took a direct strike from one of the EF4 tornadoes. The third EF4 tornado, also known as “Pilger East” was likely the strongest tornado of the outbreak, but fortunately remained in rural areas. The most remarkable thing about this outbreak was the “twins”. Tornadoes 2 and 3 (known as Pilger and Pilger East respectively) became two photogenic twins, at times moving around each other, and crossing paths. After tornado 3 dissipated, tornado 4 (Wakefield) and tornado 2 were twins for a short period of time. Read the full summary here!

June 16, 1928: Grazulis documents a family of tornadoes that crossed 30 miles through Greer, Jackson and Kiowa Counties in Oklahoma. The rating given was F4. The town of Blair was hit directly. Homes were swept away on the SW side of town. Three deaths occurred here and four others died near Headrick. “Over 10000 cattle and 100 horses were killed in the seven-mile by 40-mile tornado/downburst area. Only a very few such events have killed over 1000 cattle.”

On this day in 2017, twin tornadoes struck Bellevue, NE; the strongest was an EF2. Several homes were damaged or destroyed. Source.

On this day in 1974, an F3 tornado skipped along a 50-mile path near Albany, NY. Significant damage was reported in Green Lake, Feura Bush, Slingerlands, and Burnt Hills. Source. 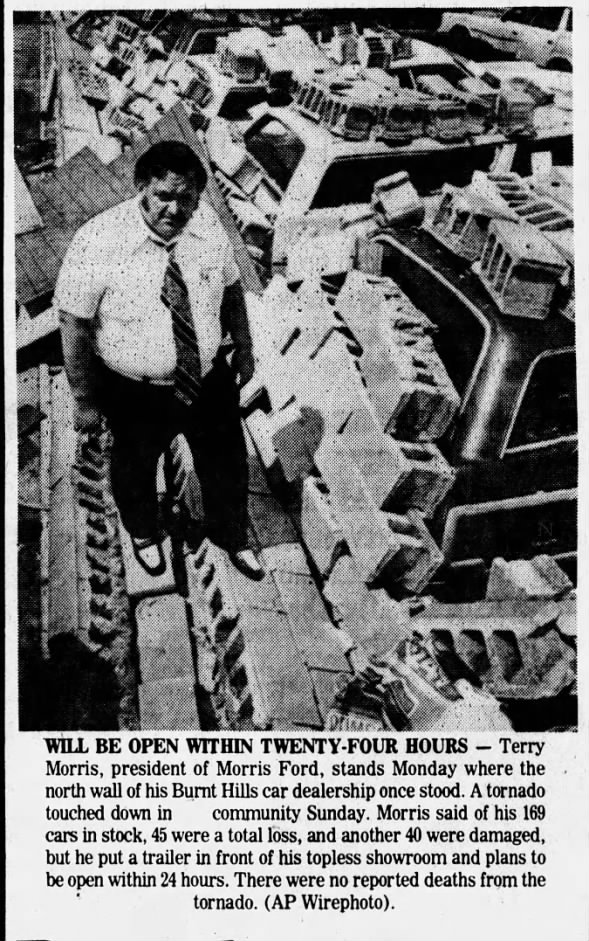 On this day in 1779: Spain declares war on Great Britain in support of France and the USA, starting the Great Siege of Gibraltar which goes on to last 3 years, 7 months and 2 weeks. Check out more historical events at onthisday.com!

On this day in 1989: “Ghostbusters II” directed by Ivan Reitman, starring Bill Murry and Dan Aykroyd premieres. Get more daily history at onthisday.com!

On this day in 1984: Frankie Goes To Hollywood had their second UK No.1 single with ‘Two Tribes.’ It stayed at No.1 for nine weeks making Frankie Goes To Hollywood the first band to have their first two singles go to the top of the UK chart. During this run the group’s previous single ‘Relax’ climbed back up the charts to No.2.  Get into the groove with more music trivia at thisdayinmusic.com!