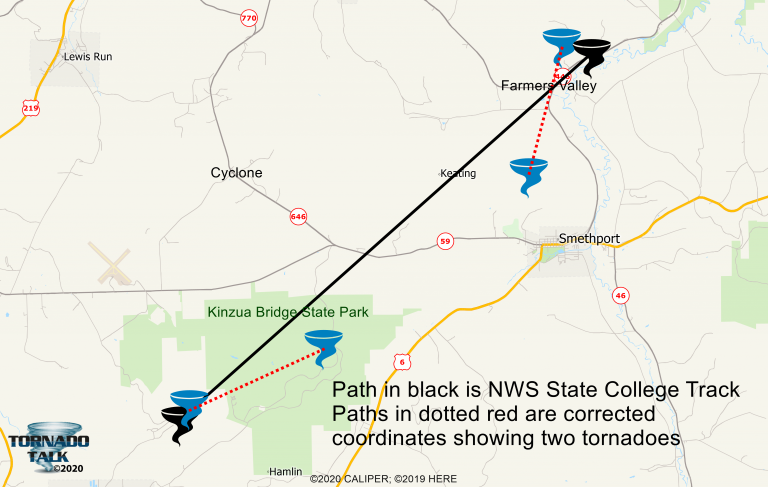 On July 21, 2003, a derecho moved across portions of Ohio, Pennsylvania, New York and New England. Per the Storm Prediction Center, it spawned 20 tornadoes. The focus of this summary is on one of the most notable tornadoes of this outbreak. It hit the Kinzua Bridge in McKean County, PA. Check out our summary on the strongest tornado of this outbreak: An F3 that hit Ellisburg, PA.

The derecho was unusual as it formed an “eye-like” feature. It looked like a hurricane as it moved across Pennsylvania. It is possible (likely) that the Kinzua Bridge tornado event was made up of two separate tornadoes; one that hit the bridge, and a second near Farmer’s Valley. We will delve into this more below.

The Kinzua Bridge Viaduct was built in 1882. At 301 feet tall and 2053 feet long, it was at one time the largest railroad viaduct in the world. At the time of the collapse, it was the fourth largest in the United States. The bridge was once capable of holding the 511-ton “Big Boy”, the largest steam engine in the world. In June 2002, it was closed to rail traffic after an inspection by the Department of Conservation and National Resources (DCNR) showed significant structural weakening, and in August 2002, it was closed to pedestrian traffic. At the time the tornado struck, the bridge was amid a $10.8 million restoration project that began in February 2003.

The tornado was embedded within a large swath of downburst winds. It developed about a mile west of the Kinzua Viaduct in a wooded area. It moved east-northeast through Kinzua Gorge, following the Kinzua Creek, downing many trees. The tornado struck the Kinzua Viaduct Bridge in the Kinzua Bridge State Park. 9 out of the 20 bridge supporters were destroyed leading to the collapse of the structure.

A couple of studies were conducted to find out why the bridge collapsed. The investigations determined that towers 10 and 11 collapsed first. Next, towers 12 through 14 were picked up off their foundations, moved slightly to the northwest, and set back down intact, only being held together by the railroad tracks. Following this, towers four through nine collapsed toward the west. Finally, as the tornado continued moving east-northeast, towers 12 through 14 collapsed toward the north-northeast, leaving a clear cyclonic pattern to the collapsed trusses. The investigation found that the bolts holding the bases of the towers to the anchor blocks were rusted. The engineering studies determined that 94 mph winds brought down the bridge. The tornado applied an estimated 90-short-tons of lateral force against the bridge. They also hypothesized that the whole structure oscillated laterally four to five times before fatigue started to cause the bolts to fail. In less than 30 seconds, the 121-year-old bridge was destroyed.

At this point, things get a bit murky. The NCDC/NWS State College suggests the same tornado lifted and then developed again 2 miles north of Smethport. It is this author’s opinion that a separate tornado formed.

Only downburst damage was observed until a point approximately two miles north of Smethport. It was here that tornado damage was discovered. The tornado moved north-northeast through the small town of Farmer’s Valley. Along this 3-mile path, many trees were downed. A barn was destroyed and two others were damaged. Two homes and a church were also damaged. Wind speeds in this damage segment were estimated to be between 80-90 mph.

There was a nearly 6.5-mile gap between tornado damage. This a rather long gap for a “skipping tornado” which is why it is my opinion that we had two separate tornadoes in McKean County.

It would have cost an estimated $45 million to rebuild the bridge. The state decided to not rebuild it. It was decided to leave the collapse trusses where they are for people to view the forces of nature and a hiking trail was created in this area where people can walk up to the wreckage. In 2011 the Kinzua Sky Walk opened, allowing people to walk out over the undamaged part of the bridge. Kinzua Bridge State Park is listed by the DCNR as one of the top 20 must-see state parks in the State of Pennsylvania. 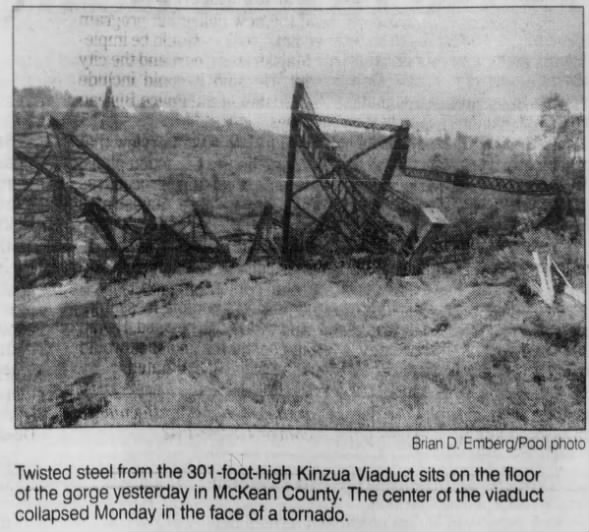 On Saturday, August 13, 2022, the author of this summary, Nick Wilkes, and the owner of Tornado Talk, Jen Narramore, visited the park. We toured the visitors center and walked out over the Skywalk. After taking in the breathtaking views from the Skywalk, we hiked down the side of the hill to the bottom of Kinzua Gorge and walked up to the wreckage. It was impressive to see the twisted remains of the trusses lying there. The tornado was rated F1 with maximum winds of 100 mph, and engineering studies showed that the winds that brought the bridge down was about 94 mph. This goes to show that “weak tornadoes” really are not “weak.” The photos below show the various signs and plaques across the park and visitor’s center.

We gathered information for this event from the SPC/NCDC Databases, and the National Weather Service State College Tornado Database, and found the following differences: