Corrected Coordinates Based on Newspaper Reports and Correspondence with Thomas Grazulis:

On the evening of August 11, 1954, a small tornado event took place in Maine. Through our research, we have determined there may have been two twisters to occur on this day. This summary will cover an F2 that caused considerable damage near the city of Caribou. It’s not all that unusual for such instances to occur in Maine. However, this tornado caused a fatality and is the most recent to do so as of this summary’s publication.

The tornado developed five miles north of Caribou, just east of Belanger Road. It first struck the Paradis farm, where trees were debarked. The twister then moved in a north-northwesterly direction and hit the Bernie Andrews farm along Brissette Road. Bernie watched as the narrow funnel destroyed their barn. In addition, on the Andrews farm, the potato house was severely damaged, three tons of hay from the shattered barn was strewn about, and shingles from the farm home roof were ripped off.

After traveling approximately four miles through wooded land from the Andrews farm, the tornado approached Van Buren Road (U.S. Route 1). At this location, the homes of Katherine Taylor and Paul Martin were severely damaged. The Taylor home was lifted and smashed against the Martin house, destroying the Martin garage. Mrs. Taylor and her daughter, Alma Cyr, were injured. Paul Martin and his family were at church when the tornado moved through. Additionally, the windows of the Martin home were completely blown out, and power lines along Van Buren Road were downed.

In an August 12, 1954 publication of The Boston Globe, the grandson of Katherine and son of Alma, Roland Cyr, described what he witnessed that terrible evening:

“I was just down the road. I had been at a neighbor’s and was returning home. I was about 50 yards from the house when I saw this black funnel cloud coming down on the house. It just picked up the house. It fell about 150 feet away against Paul Martin’s house. Next thing I knew I saw my mother standing in the middle of the debris. I rushed over. There were wires down all over the road. My mother seemed all right. She was dazed. My grandmother was pinned under some boards. I started to free her. Neighbors came to help. She seemed pretty badly injured. I saw the black funnel go on down the road but I wasn’t thinking about it then. It was starting to get dark and I couldn’t see very well. Somebody brought a lantern and we got flashlights. I went to the hospital where they took my mother and grandmother. My mother is okay but I think my grandmother is pretty bad.”

State Trooper John Hutchison, who was on duty in the area along Van Buren Road, also saw the twister, noting its dark complexion, as the funnel passed through his community. The tornado is estimated to have raced off to the north-northwest into a wooded area, where it eventually dissipated.

A single report from the previously mentioned Boston Globe article changed the path from north-northwest to north-northeast along Van Buren Road. The twister would have then passed north of Van Buren and into New Brunswick, Canada, before dissipating in a wooded area just across the St. Johns River (U.S./Canada border). Such an abrupt change in path is rare, so perhaps another tornado occurred. Based on actual damage reports in newspapers, we have elected to keep a north-northwesterly track.

Rescuers and police notified of the tornado were having trouble reaching the damaged areas due to power outages and the approaching nighttime hours. Phone services were also suffering in the sparsely populated region of Northern Maine. Amongst the chaos, Mrs. Taylor and Mrs. Cyr were taken to a neighbor’s home using doors as stretchers until medical assistance arrived. Around the same time, Reverend Joseph Carrier of Sacred Heart Church (where Katherine attended) was called to administer the last rites of the church. Jack Lancaster, the Caribou Civil Defense Director, rushed to the scene after being notified of the damage and medical emergencies at hand. Lancaster then hurried the two injured women to the nearest hospital in Caribou. Lancaster and Hutchison reflected on this event, expressing that North Caribou was fortunate that the tornado hit a less densely populated area.

Later at Cary Memorial Hospital in Caribou, Mrs. Katherine Taylor died of her injuries sustained when being lofted 150 feet from her home and being pinned by heavy debris. She was a loving mother and grandmother who was survived by her daughter Alma Cyr, one half-sister, and two grandchildren. 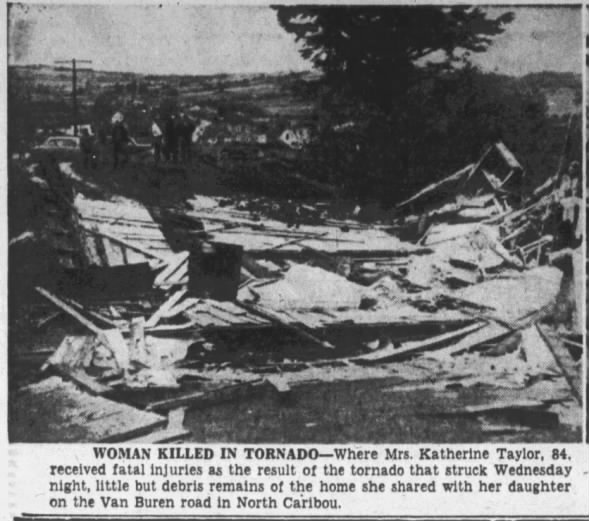 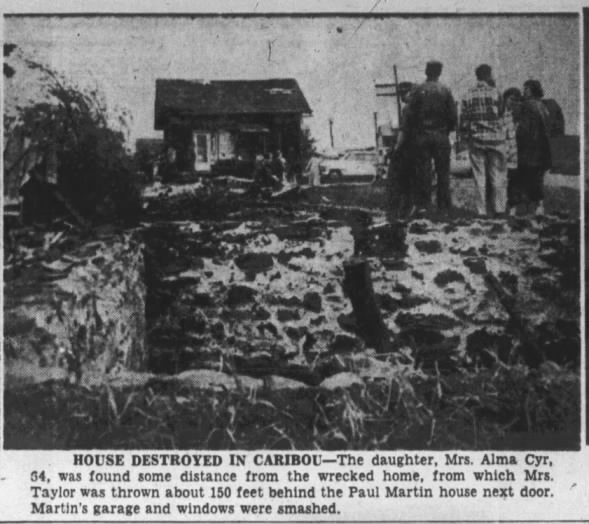 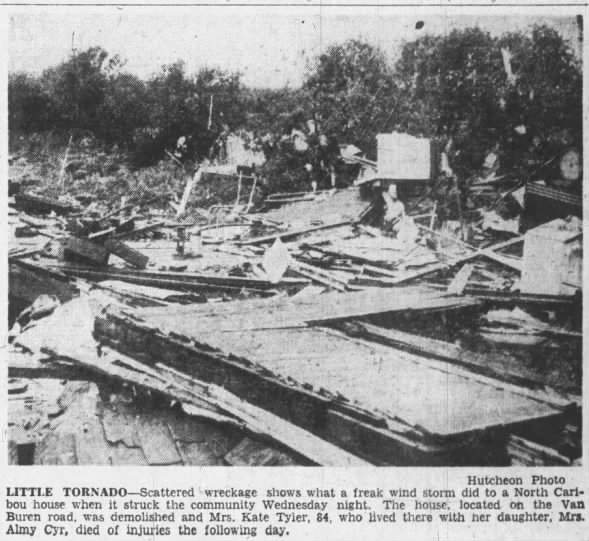