This F2 tornado was produced by the remnants of Tropical Storm Debra. Per the April 1979 Monthly Weather Review about the Atlantic Hurricane Season of 1978, Debra formed between the merging of an upper tropospeheric low and a tropic wave near the Yucatan Peninsula.  This merging became a depression on August 26, 1978 and was upgraded to Tropical Storm Debra on the 28th.  It made landfall in SW Louisiana on the 29th.  It was a disorganized system but numerous tornadoes developed across the Deep South including this quick-hitting F2 in South Memphis, TN.

Per the Storm Data Narrative, “the path was two miles long, but the most damage was confined to a half mile stretch lined with fast food restaurants.” A Wendy’s and Pizza Hut were destroyed and a steakhouse damaged near the corner of Chambliss and Elvis Presley Boulevard.  80 automobiles in the parking lots of various businesses were damaged. There were no fatalities and 26 reported injuries.

A tornado occurred in the Whitehaven area of south Memphis at about 7:05pm CDT.  The path was two miles long, but the most damage was confined to a half mile stretch lined with fast food restaurants.

First damage occurred near the intersection of Faronia and Davidson and was limited to trees, patios and power lines.  The tornado skipped over trees and commercial buildings and touched down near the corner of Chambliss and Elvis Presley Boulevard.  The path direction was to the north-northwest.  The damage indicated the tornado reached its maximum intensity, totally destroying Wendy’s and the Pizza Hut.  Very heavy damage to the Steak House near the two destroyed buildings.  Heavy damage occurred to automobiles (80) in the parking lots of the various businesses.  Many windows were broken out from flying debris.  Cars were turned over resting on their sides and other piled on top another.  Across the street, on the west side of Elvis Presley Boulevard, most of the damage was caused by debris blown into store fronts although an appliance store had a north wall blown outward and the roof caved in.

The tornado lifted again and passed over buildings and trees with little damage only to surface again at a Skaggs Drug Store on Raines Road.  Many small stores had their roofs blown off just o the north of the Skaggs Drug Store.  Some roof damage and glass damage occurred at the J. B. Hunter Department Store.  All the glass was blown out of J. B. Hunter’s Green House, which was located on the north side of the store.

The tornado continued for about one mile producing tree damage before lifting and dissipating near Winchester and Lakeview Roads.

Several witnesses reported seeing a funnel cloud while others didn’t – only flying debris.  Some heard a sound like an explosion.  The tornado was accompanied by a brief period of heavy rain.

No one interviewed saw lightning or heard thunder with this tornado.  No thunderstorm was recorded at the Memphis Metropolitan Airport, which was only two miles away from the tornado path.  This tornado was spawned by turbulent remnants of Tropical Storm Debra.

All in all there were two stores destroyed and 28 others damaged.  The 4.6 million dollar image figure does not included the cost of cleanup operations and damages to power and telephone lines. 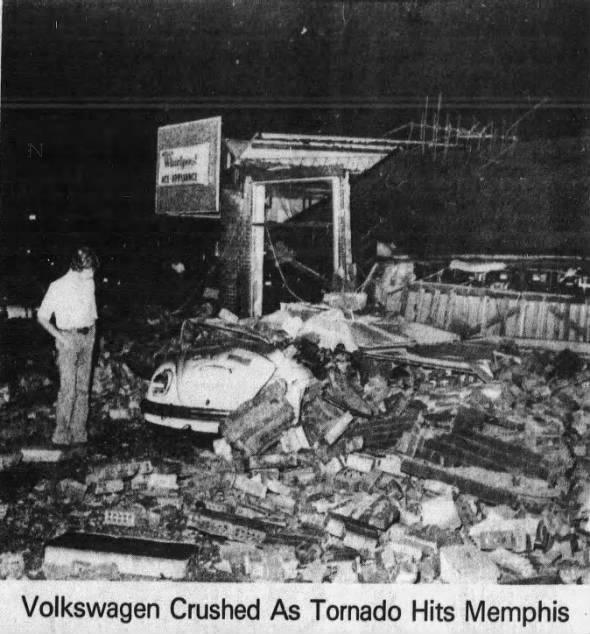 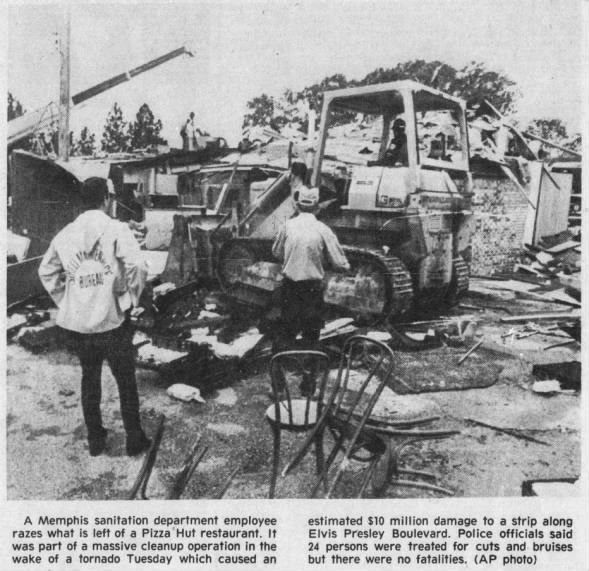 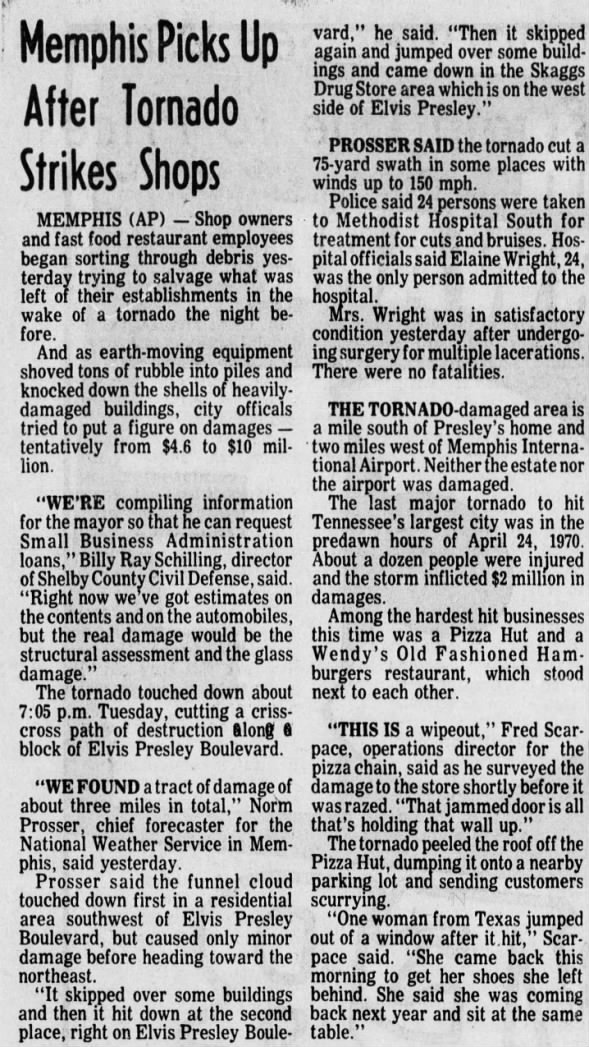