A total of 15 tornadoes are found in the SPC Database for October 29, 1956. Most occurred in Kansas and Nebraska.  We look at one of the Kansas tornadoes in this summary.  It was given a rating of F3 and traveled through parts of Russell, Lincoln and Mitchell Counties. Thomas Grazulis in Significant Tornadoes stated it was a skipping path. Per the Climatological Data National Summary (CDNS), the tornado began 4 miles west of Dorrance.  It traveled north-northeastward to 4 miles SW of Lucas to 7 miles NE of Lucan and ended in SW Mitchell County. The last damage reported was near Hunter.

Three homes and many barns and sheds were “demolished”.  A large dairy was struck west of Dorrance.  Also in this area, a barn was unroofed, a machine shed of cement blocks was demolished and an airplane and hangar was destroyed. There were no fatalities and 2 injuries.

The injuries occurred near the end of the path to Mrs. Delmar Gier and her 4-week-old baby. She was feeding the baby when the twister hit their two-story farm home.  Mom and baby were thrown out of the house into a field 50-60 feet away. They suffered only cuts and bruises.

Per CDNS, most of the buildings damaged along the path had been rebuilt after a severe windstorm/tornado in 1951. “Newly-completed brick homes received only minor damage.” 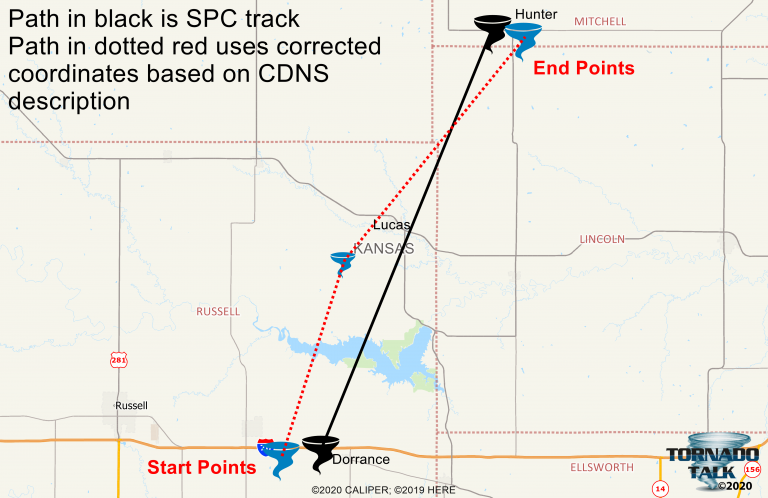 Corrected Coordinates based on CDNS description: 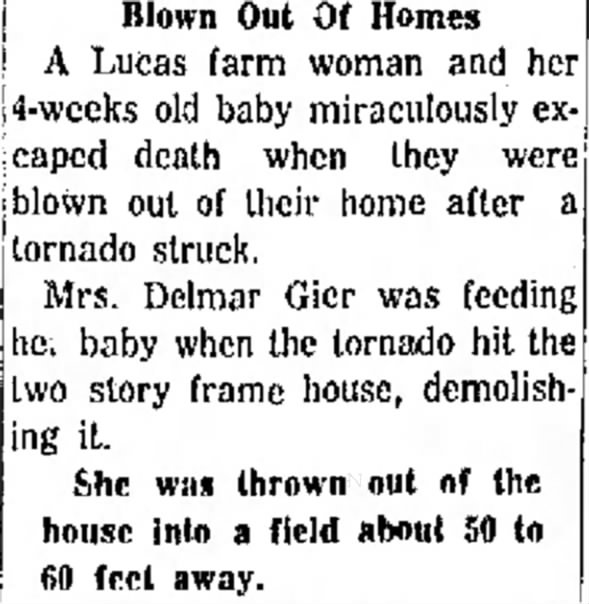 We gathered information for this event from the SPC & NCDC Databases, the October 1956 Climatological Data National Summary and Thomas Grazulis in Significant Tornadoes and found the following differences: