Per the Storm Prediction Center Database, 12 tornadoes occurred on June 8, 1953.  8 of them were in the state of Michigan.

In this summary, we look at the F5 Tornado.  It is considered Michigan’s worst natural disaster in terms of deaths and injuries (NWS).

It traveled from North of Flushing through the northern part of Flint and ended north of Lapeer.  At that point the tornado lifted and developed again from Kings Mill to Lake Huron. This is officially listed in the record books as 2 tornadoes in this family.  Flint-Beecher was given a rating of F5; the Kings Mill to Lake Huron was rated F4.

The greatest damage was on both sides of Coldwater Road near Beecher. Per Thomas Grazulis in Significant Tornadoes, “the tornado virtually obliterated all homes”.  Most of the deaths occurred in this area.

Officially, the death toll from this devastating twister is 116.  Grazulis notes that 1 fatality should be attributed to the 2nd tornado in the family. Regardless, The Flint-Beecher tornado ranks as #10 in the top 25 of deadliest US Tornadoes per the Storm Prediction Center.

Additional facts about the tornado from the NWS Detroit/Pontiac:

In a 50th anniversary set of webpages on this event, the NWS picked a few personal stories that were originally printed in the Flint Journal on June 11, 1953.  Here are a couple of them that capture the magnitude of this event.

“That’s all that’s left,” the man observed remorsefully as he picked up and dropped a sink lying half a block from the site of his former residence. He is Claudieus Hamm, who had lived at 1212 W. Kurtz Ave. with Mr. and Mrs. Winfred Vaughn and their three children. Hamm and Vaughn were working the second shift at Chevrolet Manufacturing Plant when the storm hit. How is the Vaughn family? “Three of them are at a funeral home,” Hamm said. That was Mrs. Vaughn and two of the children, with the third child hospitalized. Hamm was looking over the site without expecting to find anything. Nearby a dead dog lay, unburied, and a roast chicken was on the ground. “That was in Muriel’s (Mrs. Vaughn) icebox,” Hamm said, when some one pointed out the chicken.

At what had been 1067 W. Coldwater Rd., Mrs. Geraldine Winderman, who is a visitor from Miami Beach, Fla., looked over the ruins of the home of her brother, Leon Hartley. Attesting to the honesty of rescue workers was Mrs. Winderman’s statement that her brother had returned from work to his wrecked home and found all his money in a desk standing in the yard. A china piggy bank was found broken, but with the money intact. No one was home when the storm struck. Mrs. Winderman also had an aunt next door, and although that house also was levelled, none of her relatives was killed. “I’ve been in hurricanes in Florida,” said Mrs. Winderman, “but I’ve never seen any devastation like this.” Clarence Hartley, 502 W. Pulaski Ave., a brother of Leon and Mrs. Winderman, told how he had just moved out of the disaster area in February. He formerly occupied 1068 W. Kurtz Ave., where Mrs. Helen Kilgore, 31, and three small children were killed.

Mr. and Mrs. Wilbur Franklin, 2246 W. Coldwater, and their three children were fortunate enough to live through the storm except for minor cuts and bruises. “I don’t know what it sounded like,” Franklin said. “I don’t know if I even heard anything. My wife saw it coming through the window, and we hurried down the basement. We laid down against the west wall, the kids beneath us, me and my wife, and it hit.” It struck their home directly, wiping it off its foundation, carrying the main frame several feet away and smashing it to pieces. Other sections of the building are strewn hundreds of feet away. Wires hang like giant strings of spaghetti in the Franklin yard, the telephone pole awry. Jagged tree trunks stand as mute evidence of the cruel amputation methods of a twister. What is the value of Franklin’s salvage? “I don’t know. I don’t know why I’m even pickin’ it up.” Spread before him was a large blanket into which he dropped from time to time a personal article. The pile was pitifully small…

Note:  This summary combines the F5 that went through North Flint/Beecher with an F4 that began near Kings Mill and dissipated over Lake Huron.  The CDNS entry stats reflects both tornadoes.  They list a path of 70 miles from this family. The width ranged from 50 yards to 1 mile.  They note 116 fatalities and 867 injuries.

Tornado began 2 miles north of Flushing and was 1/2 mile wide when it struck northern edge of Flint moving eastward down Coldwater Road with complete destruction.  Funnel cloud then followed Flint River to Columbiaville.  Its path is not definite east of Columbiaville.  Either a new funnel formed or displacement to south took place after lifting.  Path of destruction resumed at Kings Mill and on an easterly course moved to Lake Huron, passing north of Yale and between Jeddo and Lakeport.  In the  counties affected (Genesee, Lapeer, St. Clair), 386 homes destroyed and 525 damaged.  Fram buildings destroyed totaled 364, while 37 damaged.  Damage to homes estimated at $2,300,000.  In St. Clair County, authorities estimated loss of farm machinery at $130,000 and to livestock, $11,000.

Thomas Grazulis has 2 entries in his book:  One for the Flint-Beecher F5 and one for the Kings Mill to Lake Huron F4.  Here are some added notes for both tornadoes.

It is set too far north.  The path should go right over Coldwater Road near Beecher. 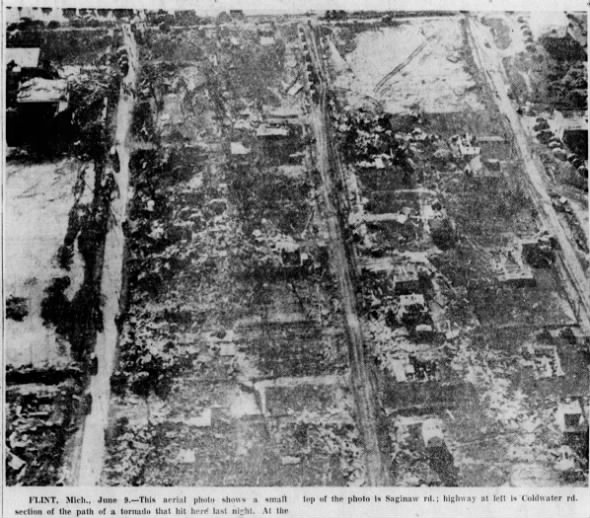 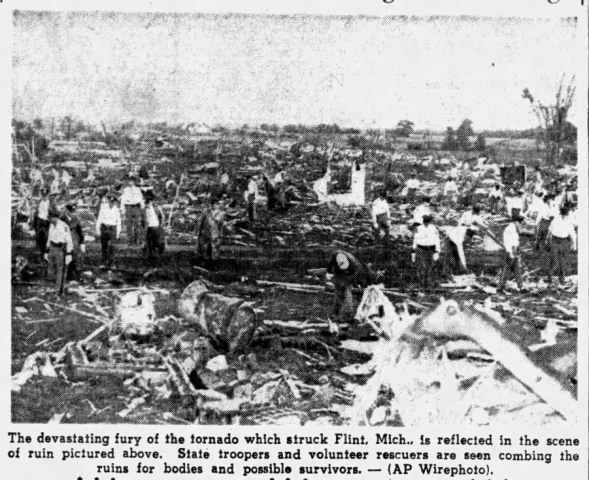 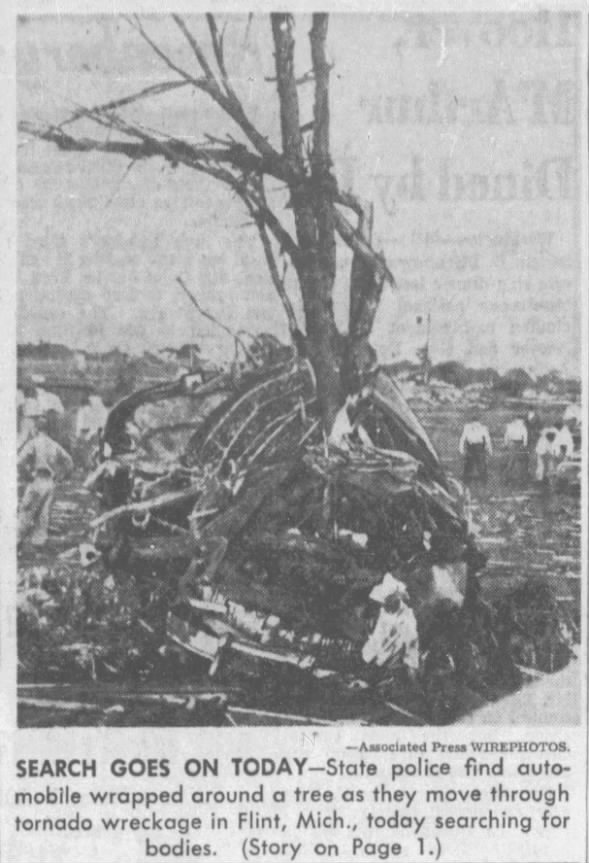 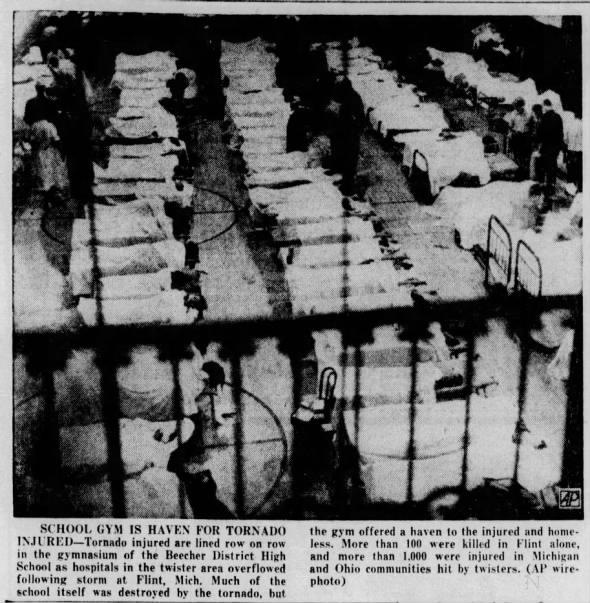 We gathered information for this event from the SPC & NCDC Databases, the June 1953 Climatological Data National Summary and Thomas Grazulis in Significant Tornadoes and found the following differences:

The 25 Deadliest US Tornadoes – The Storm Prediction Center