June 18, 1939 started out as a hot muggy day across most of Minnesota.  The US Weather Bureau recorded temperatures above 80 across southern and central MN.  Sometime around noon, thunderstorms developed along a cold front and tracked across east-central Minnesota producing heavy rainfall, damaging winds and hail.  Around 3:00 PM, one of these severe thunderstorms produced one of the most violent tornadoes to visit the Twin Cities area in recorded history.

The Anoka-Champlin tornado started somewhere south of Corcoran and moved northeastward at a speed of 30 mph.  Shortly after touchdown, the tornado struck an automobile containing 4 people and tossed it 333 yards, killing all of its occupants.  In the area where the car was struck, a row of 4 farms along the road were leveled and debris was scattered over the countryside.  The tornado then moved through the community of Maple Grove where it caused severe damage to multiple farmhouses in the area.

Four miles later, the tornado slammed into the southside of Champlin where it debarked trees, wrapped cars around trees and swept away homes.  As the tornado crossed the river into Anoka, multiple eyewitnesses reported that it momentarily exposed the riverbed of the Mississippi.

As the tornado advanced into Anoka, it grew to a width of nearly 300 yards though slightly decreased in intensity.  Homes were leveled in the residential areas of town and it flattened most of the Anoka armory.  A piece of sheet metal from the armory was carried four blocks.  The Mission Lutheran church in Anoka was demolished and left as a pile of large debris.

The tornado began to intensify again as it left the downtown area and was able to severely damage 10 homes north of Anoka.   After traveling through rural areas, the tornado hit the small village of Cedar where several homes, a creamery and a school were demolished.  After exiting Cedar, the tornado dissipated over a rural area.  The entire path length was estimated at 25 miles.  Paper from Anoka was found up to 70 miles away after the tornado lifted.

Here are the names of those killed in this tragic event per hometownsource.com. 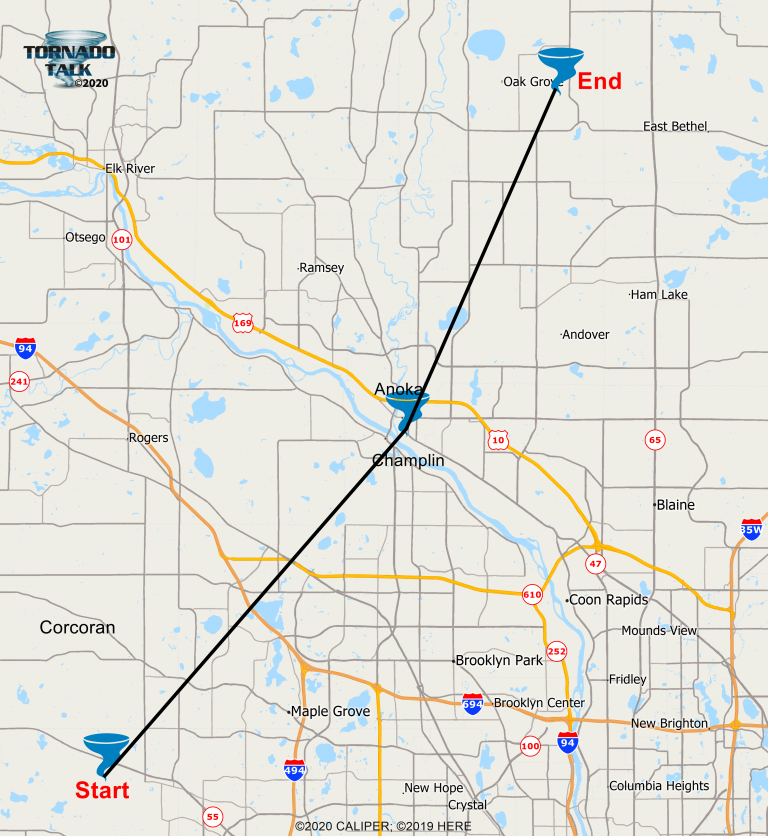 Estimated coordinates from maps for the tornado track:

Many thanks to the Anoka Historical Society for sending us the following photographs.  From Audra Hilse, “We have many more photos than this, but I tried to pick ones that matched locations mentioned in your article, or that showed a bit more of the personal side of things.”

This is the only church listed as “Destroyed” in the June 21, 1939 edition of the local newspaper, the Anoka Union, which published a list of all the properties destroyed or damaged by the storm.

Harvey and Opal (Walton) Harrington lived at 636 Johnson Street in Anoka with their three children, Philip, Warren, and Bessie Lou. Their home was one of those completely destroyed by the 1939 tornado. The children were about eleven, nine, and six years old, respectively, when the storm hit. After the storm, the children spent some time living at the former Kline Sanitarium (a National Register property and apartment building today), which the Kline family offered as housing for those whose homes had been damaged too badly for habitation.

A few other photos of damage or things of interest in Anoka following the storm. Some have places/buildings identified, others do not.

This footage was taken by Robert A. Peterson of Anoka, who was on his way back from Minneapolis with a brand new movie camera when he encountered the aftermath of the storm. That camera, and the other equipment that he used to create and edit this film, are all artifacts at ACHS. 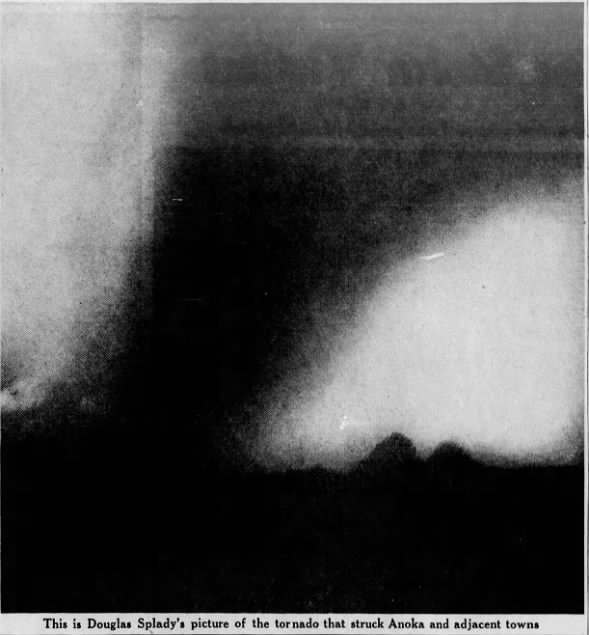 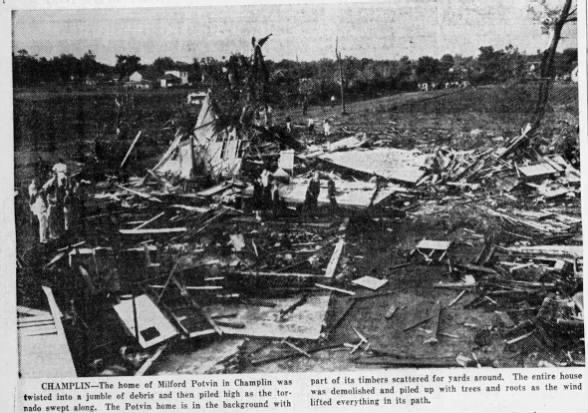 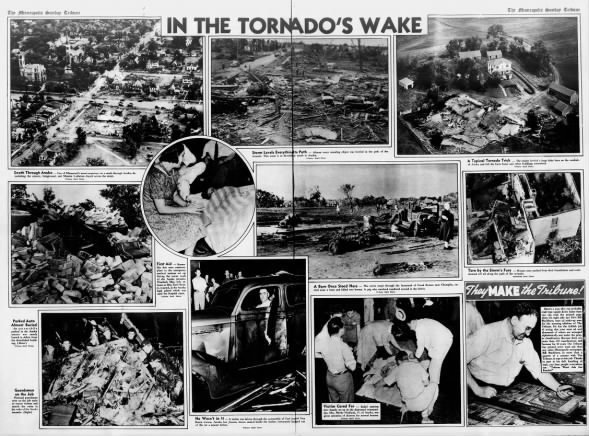 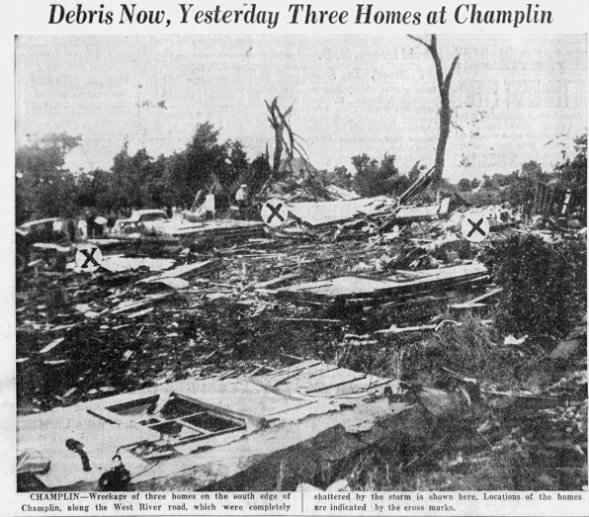 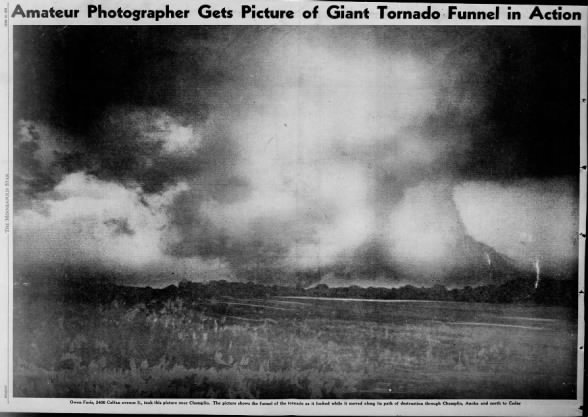 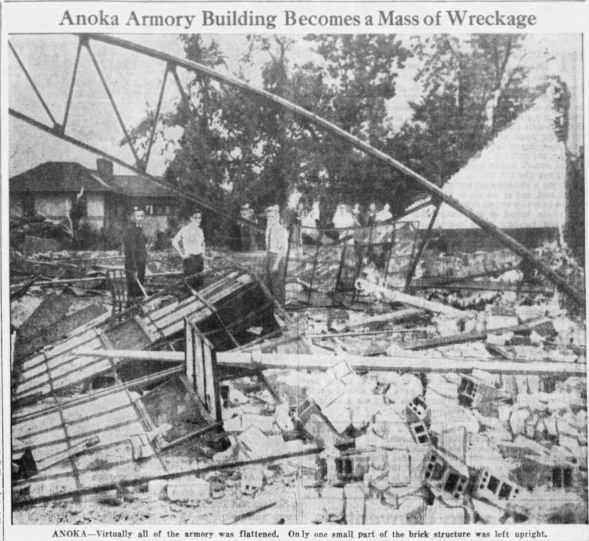 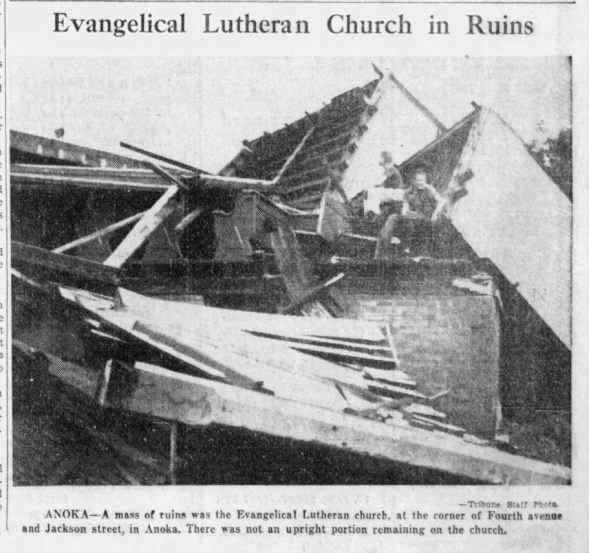 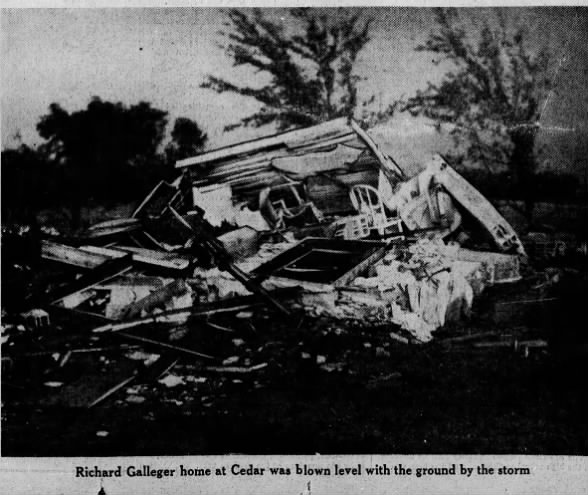 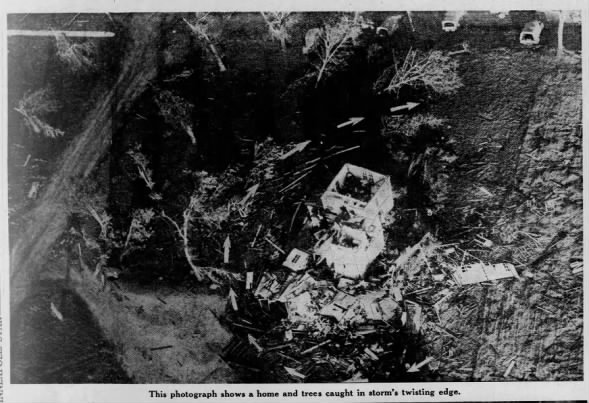 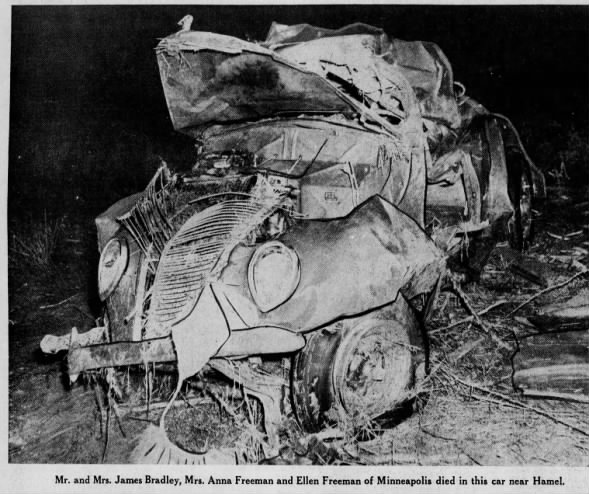 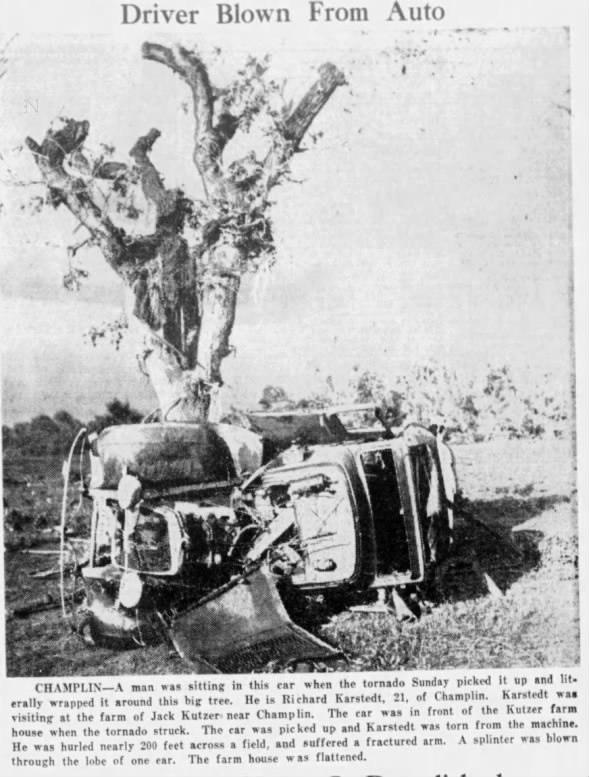 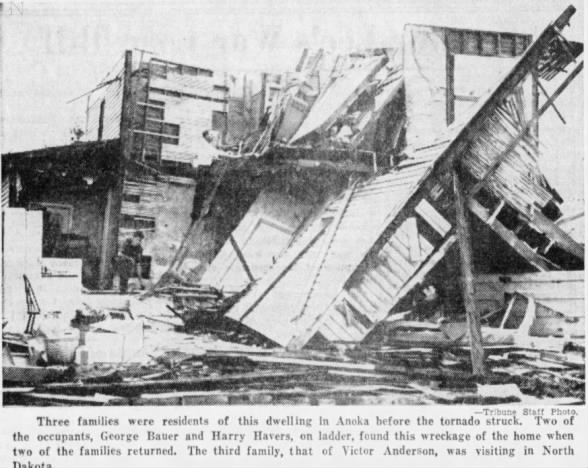 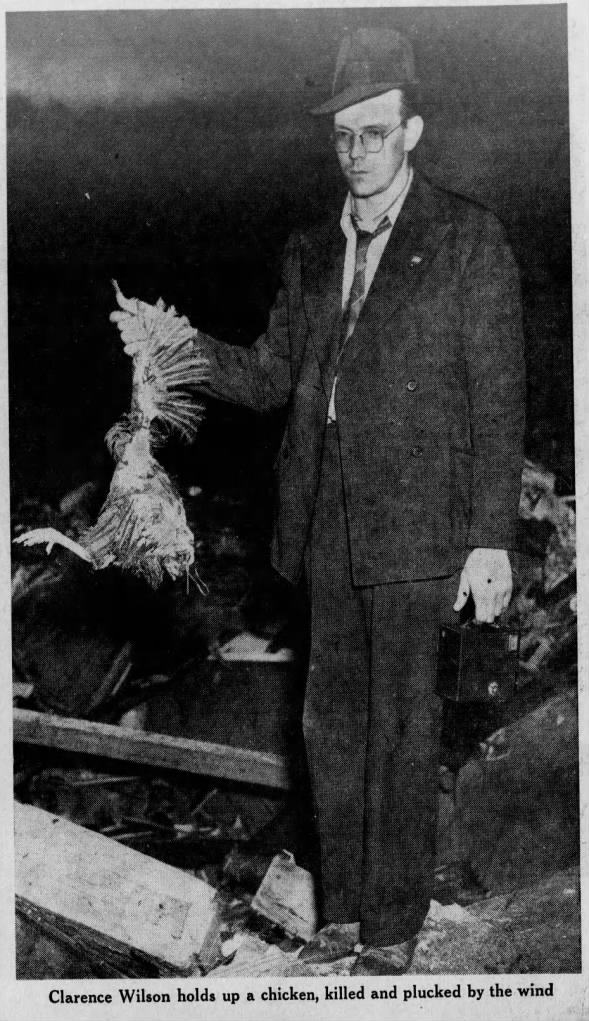 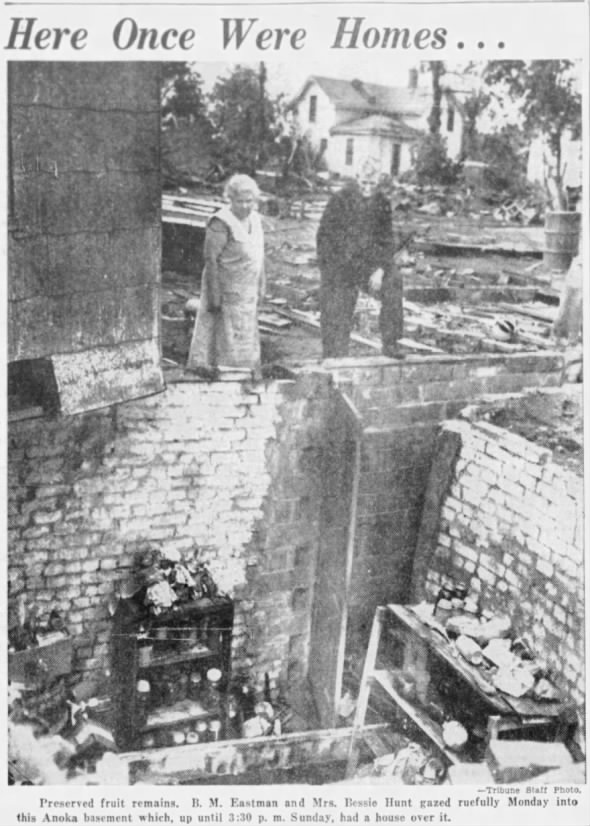 We gathered information for this event from the NCDC Database, the June 1939 Monthly Weather Review (MWR) and Thomas Grazulis in Significant Tornadoes and found the following differences: