The Storm Prediction Center only has this tornado crossing through Scioto, Lawrence and Gallia Counties in Ohio.  Thomas Grazulis in Significant Tornadoes begins the tornado path in Greenup County, KY.  Storm Data also mentions the tornado in KY.  Here is their entry in the April 1968 Storm Data Narrative:

“The storm struck in northern Greenup County.  20 to 25 houses were reported destroyed and 100 or more damaged in the communities of Sunshine, South Shore, Flatt Hollow, Little White Oak, Siloam, and Schultz.  It was described by residents as “a huge upside-down funnel…a yellow swirling mass…a giant cone from top to bottom”.  The storm moved down a hillside into a valley and up the slow of another hill.”

A greater amount of damage and all loss of life occurred in the state of Ohio.  Here are the details from Storm Data:

“A tornado moving in an east-northeast direction at a speed of 45 mph crossed the Ohio River from Kentucky and first hit a train leaving several cars overturned.  The storm then crossed Route 52 into the northwestern portion of Wheelersburg.  In the Wheelersburg area, 7 persons were killed and 75 injured while about 550 homes were destroyed or sustained damage.  Golf ball and baseball size hail and heavy rain were reported in this area.

The majority of injuries and personal property damage occurred in a residential area on Dogwood Ridge Road (about 4 miles ENE of Wheelersburg).  After leaving this community the storm skipped its way through a sparsely populated rural area to Gallipolis.  Damage was reported near Lyra, about 2.2 miles north of the junction of State Routes 141 and 233.  On 233, the width of the funnel was nearly 0.4 mile wide.

In this area, 1 home was completely demolished while another lost its roof.  Baseball size hail was reported about 6 miles south of Rio Grande on route 325.  At this point, trees to the north along the storm’s path lay generally toward the west while those to the south were laying mostly toward east and those in the middle were twisted in all directions.

In the Gallipolis area, damage was heaviest along Chillicothe and McCormich Roads where 6 house trailers, 8 homes, and 4 farm buildings were demolished or damaged.” 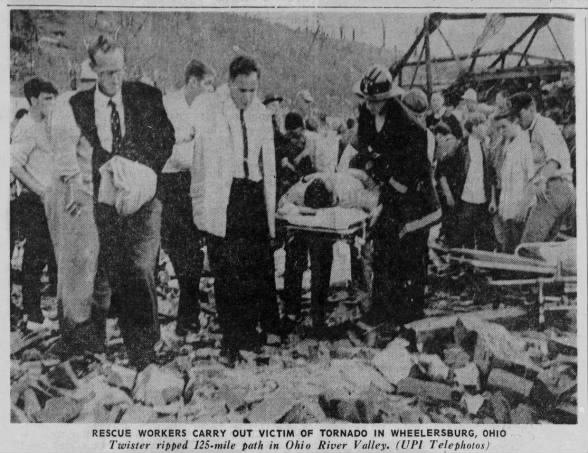 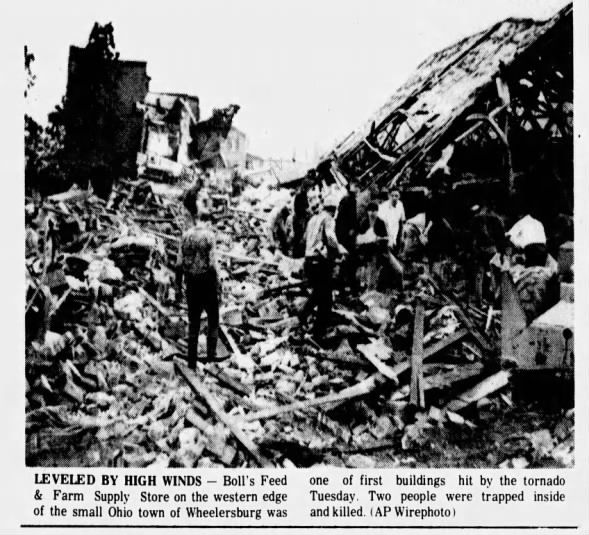 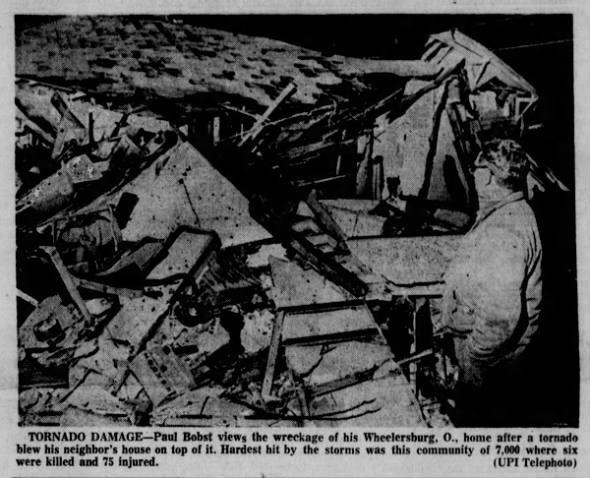 We gathered information for this event from the SPC & NCDC Databases, the April 1968 Storm Data Publication and Thomas Grazulis in Significant Tornadoes and found the following differences:

When you plot the official lat/lon from SPC, it seems too far south.  The tornado moved into Wheelersburg. You would not know that by the coordinates given.  The map plots the official coordinates.  I have also added markers for areas mentioned by Grazulis that had damage.  This includes near South Portsmouth, KY.