Per the SPC Database, 7 tornadoes occurred on this day in 2016.  One in KS, 2 in Arkansas and 4 in Oklahoma.  The strongest tornadoes of the day were rated EF2 and were found in Eastern OK.  This summary will take a look at those 2-EF2s, one of which moved through the northern parts of Tulsa. 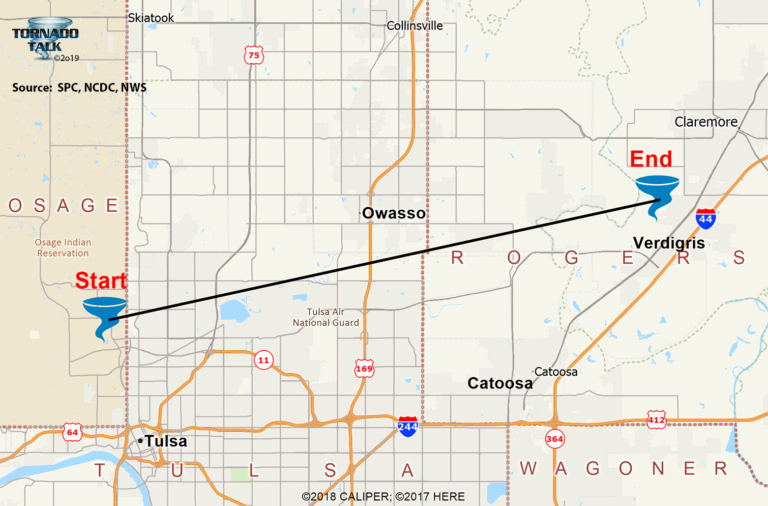 This is the first segment of a three segment tornado. This tornado developed about 2.5 miles southwest of Turley (Osage County).  It severely damaged the roof of a home, destroyed several outbuildings, destroyed farm equipment, and snapped or uprooted numerous trees. Based on this damage, maximum estimated wind in this segment of the tornado was 100 to 110 mph. The tornado continued into Tulsa County, Oklahoma.

This is the second segment of a three segment tornado. In Tulsa County, the tornado moved east-northeast, roughly along E 46th Street N to the west of Highway 75. It damaged more than 300 homes, and thirteen churches and businesses. Seven people were injured in north Tulsa. Numerous trees were snapped or uprooted and numerous power poles were snapped. The tornado moved east-northeast across Mohawk Park where it snapped and uprooted numerous trees. Several large, metal-framed, industrial buildings were significantly damaged north-northeast of the Tulsa International Airport on N Mingo Road. The tornado then crossed Highway 169 just south of the Bird Creek Bridge where it destroyed several barns and snapped numerous trees along E 56th Street N. Based on this damage, maximum estimated wind in this segment of the tornado was 110 to 120 mph. The tornado continued into Rogers County, Oklahoma.

This is the third segment of a three segment tornado. In Rogers County, the tornado moved east-northeast passing across the northern portion of the Patriot Golf Club and Stone Canyon housing subdivisions. Numerous homes were damaged in this area, some severely. Several homes under construction were destroyed. The tornado crossed Highway 266 destroying a business, damaging a number of homes, destroying barns and outbuildings, and snapping or uprooting numerous trees until it dissipated north of Verdigris. Based on this damage, maximum estimated wind in this segment of the tornado was 110 to 120 mph.

Video from the Tulsa, OK Tornado as it touched down near Turley and tracked east through Owasso and Catoosa. The end is the tornado as it passed through and damage that occurred at the Stone Canyon subdivision. Video Credit: Jacob Dickey Live Storms Media (A part of the NWS Summary of the Event)

This tornado traveled 6.4 miles through parts of Rogers County.  The max width was 550 yards.  Estimated max wind speed of 120-130mph.  There were no injuries or fatalities reported.  Based on radar data and the ground survey, the supercell that produced the tornado that went through North Tulsa cycled north of Verdigris where that tornado dissipated and a second tornado developed SW of Claremore.

This tornado damaged numerous homes east of Highway 66 and west of I-44. Some of the worst damage in the path occurred in a housing area near Highway 88 where several homes received severe damage to their roofs and wall structures. Several vehicles were rolled. The tornado moved east along the E 500 Road where trees were snapped or uprooted, homes were damaged, and barns were destroyed. The tornado then moved east-northeast toward Will Rogers Downs on Highway 20, where it turned sharply to the northeast and dissipated after damaging several large barns. Based on this damage, maximum estimated wind in the tornado was 120 to 130 mph.